You don’t always have to have the best graphics or the flashiest, movie-quality productions to be great, and generally, it is the simplest games that make the greatest impact. While many games aspire to redefine what it is to play a game, Pix the Cat keeps the formula relatively simple while adding just enough to keep you coming back for more. Pix the Cat is an addictive puzzler that combines the gameplay of the old cell phone standard Snake with the presentation of Pac-man Championship Edition. It sounds like a weird combination, but everything comes together to create an impressive game in a little package. 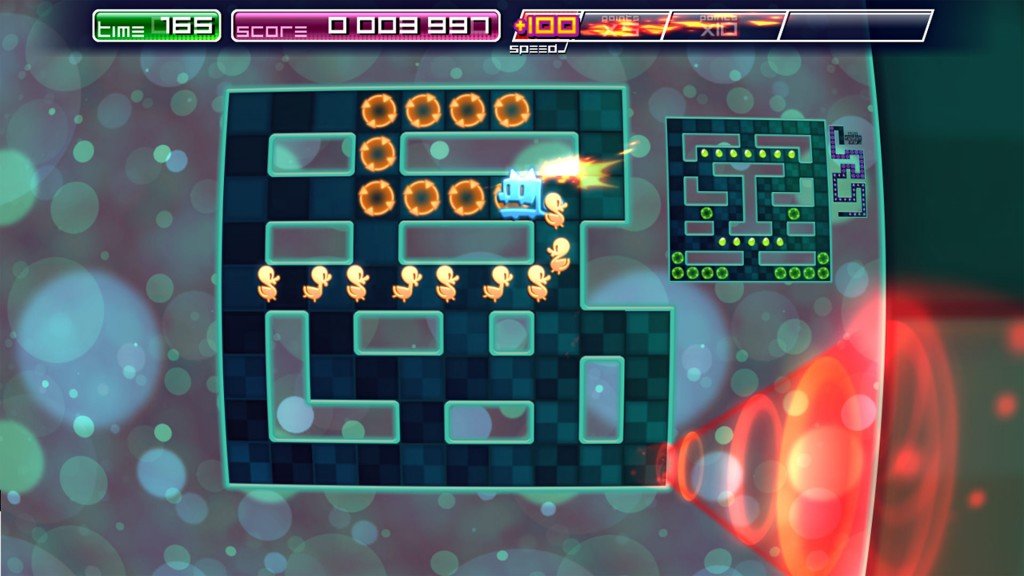 The premise of Pix the Cat is relatively simple. You play as Pix, and well; he’s a cat. You are tasking with collecting eggs that are found in paths along a maze. As you collect each egg, they hatch into ducklings that follow you around the maze. Your job is to lead the ducks to the goals which are also found throughout the level. The object is to collect all the ducklings first, then lead them to the goals. This sounds simple enough, but you can not move backwards, and you can not move across your tail of ducklings, just like Snake. If you manage to collect all the ducklings and bring them all to the goals without trapping yourself, your combo goes up and you get faster. If you trap yourself, you break your combo and you get slower. As you can probably tell, this is a very simplistic game, but it sets the scene for an intense score chase.

Pix the Cat has a number of different stages with many levels within each stage. Each level takes about 15 to 20 seconds depending on skill, and the exit of one level leads you to the start of the next. Each game is timed so no matter what, your game will end once the timer runs out. Getting a better score breaks down into how efficient can you be during any single level. You must find the path that takes the least amount of steps between eggs and goals all while not trapping yourself. The better you are at managing your tail of ducklings and doing it quickly, the better you will score. Along the way, you will unlock bonus items for hitting certain scores which just gives you that much more incentive to try and optimize your old score. For those that keep a string of perfect levels going, you will enter into Fever Time which is a super fast mode which allows you to move extra fast and score extra points while doing it. It is a fairly standard bonus mode, and it is usually the difference between beating a high score and missing by a hair. 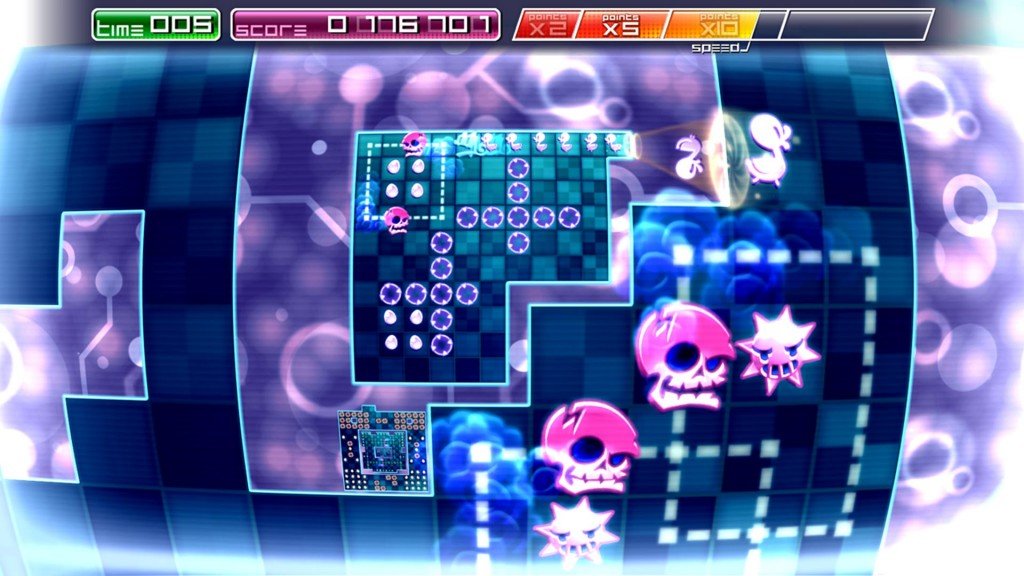 The game is quite easy at first, especially since many of the beginner paths show you the optimal path right away. However, the further down you go in a stage, the more complicated the layouts become. Eventually, enemies will join the fray, and though there is no combat and they follow a set path, the add an element of timing into your egg collecting run which just makes it that much harder. Looking at the difficulty curve from a outsiders perspective, the game is very fair and it gives you plenty of time to learn the mechanics slowly while giving you just enough bonuses and treats to make you want to play again. First, it is just trying to improve your score but before long you’ll be trying to unlock all the master content while making sure your friends can’t beat your score. The difficulty curve is tuned quite nicely and it stands as the gold standard for making puzzle games approachable and addicting at the same time.

While it would be enough to just have the Arcade mode for the game, there are several other modes which change up the gameplay and add some variety to the game. First, there is Laboratory mode which is a game within a game, so to speak. You play as a cell and you have to lead other cells to the goal. It is a very similar concept to Pix the Cat, but there are small tweaks to the gameplay which make it slightly different. In Laboratory mode, there is no time limit, once you pick a direction to go in, you keep moving until a wall or enemy stops you and you can run into your tail of cells, you just can’t get trapped or run into an enemy which will lead to a restart of the level. There is also the Nostalgia mode which is the base Pix the Cat game but re-skinned to make it look like a black and white cartoon. Finally, there is an Arena mode which is a 2 to 4 player competitive multiplayer game where the eggs you collect turn into projectiles and you dash into your opponents. The only issue with Arena mode is that it is local play only, there is no online multiplayer which feels like a missed opportunity. 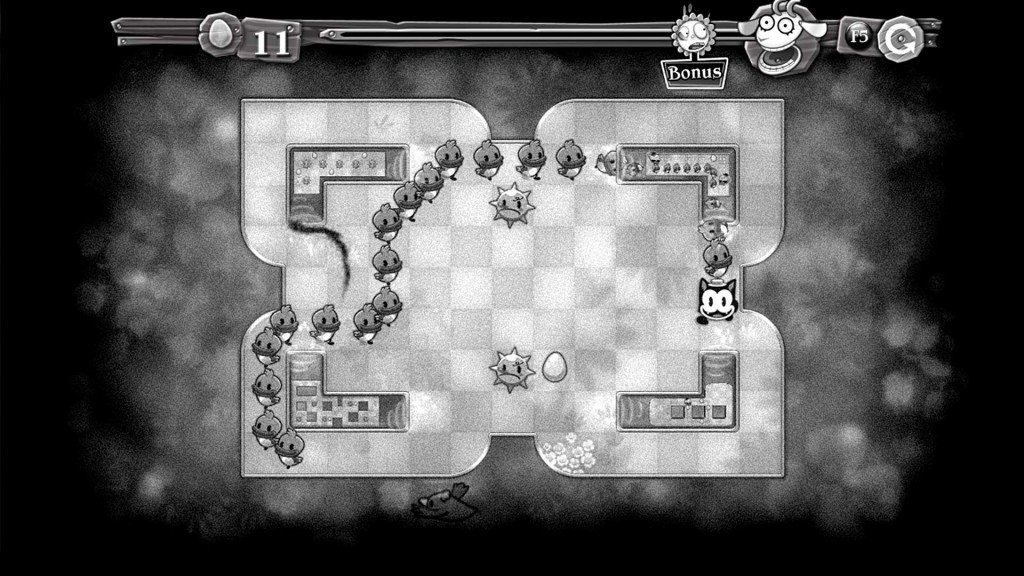 No review of Pix the Cat would be complete without mentioning the game’s excellent soundtrack composed by Xavier Thiry. It features addicting dance inspired tracks that get heavier with each combo level you acquire. However, the soundtrack feels progressive and you hardly notice the change until you start tapping your foot to the beat as you combo up. It all comes to an apex when you reach Fever Time and you are treated with an excellent dance track that would fit perfectly in your workout playlist. Thiry did a great job here and his work for the game stands out as a high point for the game itself.

While Pix the Cat is a great game overall, there were a few smaller issues I encountered while playing the game. Since we played the game on a PC, we used the keyboard to control the game. Pix the Cat controlled well overall, but Pix felt loose and you had to press the key slightly earlier than you would otherwise to make the turn. It wasn’t difficult to get used to, but it is worth mentioning if you were going to play the game the same way we did. We did plug in a controller and using a D-pad made things slightly better, but the problem still existed. 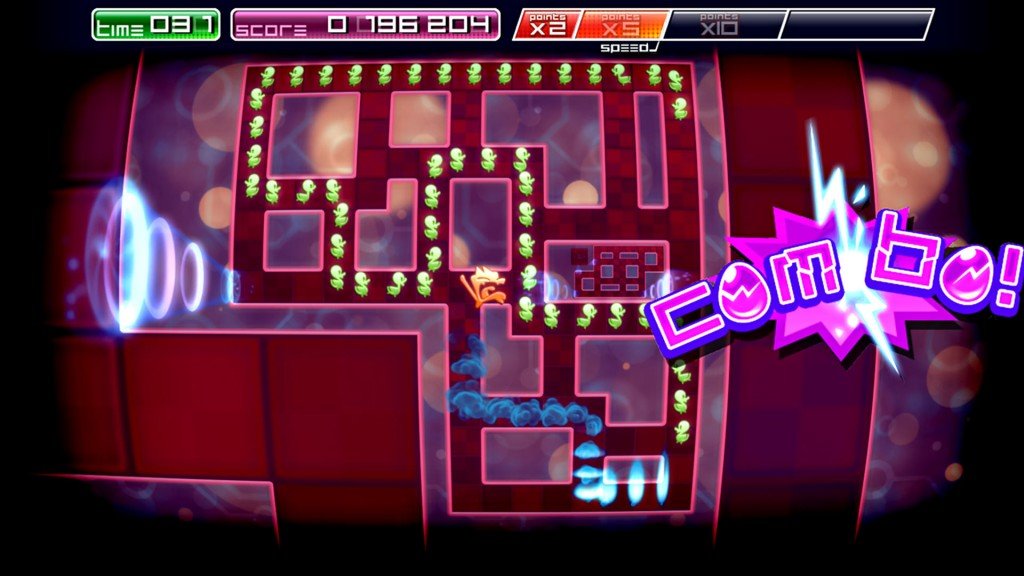 In the end, Pix the Cat is an excellent puzzle game that should not be missed. It features a feverish score chase that will easily pull you in and not let go. With a fun, colorful presentation, easy-to-learn but tough-to-master gameplay, an awesome sound track and a challenging set of levels to overcome, there isn’t much more you can ask of a great puzzle game. Sure, having online multiplayer would have added quite a bit of value to the game and the controls, at least for the keyboard, felt off, those are no excuses not to pick up this game. We wholeheartedly recommend you give this game a try and since it is widely available on several different platforms, make sure you keep an eye out for Pix the Cat, you’ll be happy you did.

This review is based on a review copy of the PC version of Pix the Cat developed by Pasta Games, published by Focus Home Interactive

Did you like this? Share it:
Combo Up! | Pix the Cat Review
Overall Score8
Positives
Negatives
8Overall Score
Reader Rating: (0 Votes)
0.0