Capcom’s original Resident Evil game, released in 1996 for the Playstation 1, is widely considered to be one of the seminal games of its era and the real birth of the mainstream survival horror genre.  The brainchild of Shinji Mikami, Resident Evil (known as Bio Hazard in Japan) became a huge mainstream success and was released to universal critical praise.  More importantly, it launched a financially and (mostly) critically successful franchise that has spanned comic books, movies, and many new games and HD remakes of series favorites.  Resident Evil HD Remaster stands as the most recent of these remakes, and builds upon the original game’s GameCube remaster, released in 2002.  Though this new technological leap isn’t quite as impressive as the game’s transformation between PS1 and GameCube, HD Remaster manages to add significant technical polish and modernize the control scheme of the series’ fan favorite, making it the definitive version of the original Resident Evil.

The most immediately noticeable update is the significant visual upgrade.  Though the original PS1 release exists as an entertaining and almost humorous comparison, the real qualitative side-by-side exists between the 2002 remake and this new HD Remaster – and the difference is noticeable.  The character models are perhaps the most impressive change, replacing the muddy GameCube textures with models that most closely resemble the quality of Resident Evil 5.  Jill’s alternate-costume ponytail has even had appropriate physics applied to it, which sometimes get a little videogame-hair goofy, but nonetheless remains a nice touch.  The models are crisp, high-resolution, and free of aliasing, looking as though they belong in a game released within the last several years. 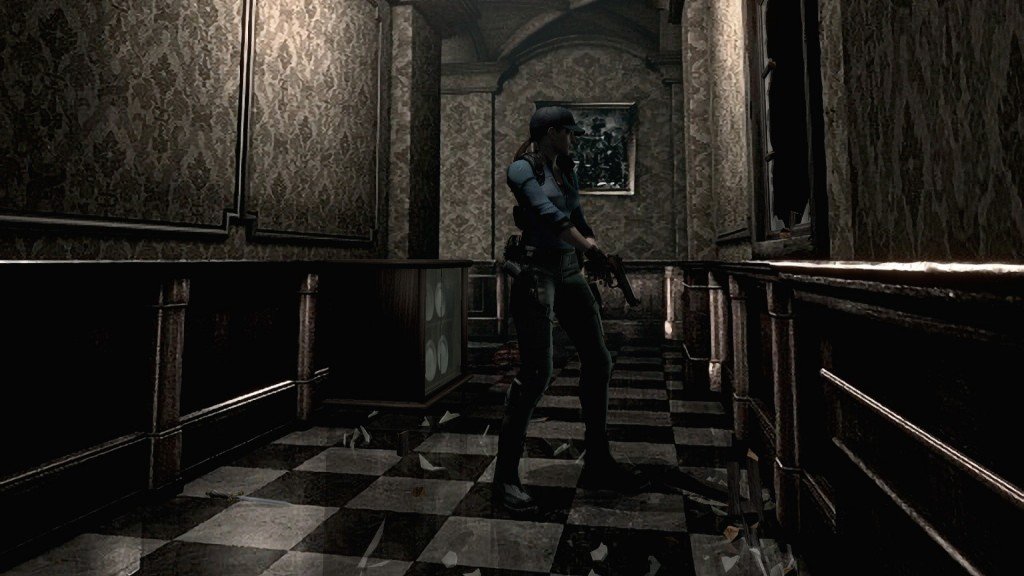 Iconic locations from the original game are reproduced with faithful detail.

There’s been a significant dynamic lighting overhaul which does a lot to add an appropriate sense of atmosphere to the game.  Candelabras glow and lightning flashes through the hallways of the Spencer mansion in a way that could only have been imagined in past incarnations of the title.  The game’s infamous loading-screen doors have all received a fresh coat of paint as well, which is fortunate – you’ll be staring at them a lot as you unravel the mystery of the Umbrella Corporation and the T-Virus. It’s in these little details that HD Remaster shines: there’s obviously been a significant amount of effort and care taken to update the game to today’s standards.

The static backgrounds of the game have also received a touch-up, and exist as a collaboration of static images that have been reproduced in a higher resolution and animated 3D objects in the environment.  While these backgrounds are certainly an upgrade, they can be inconsistent, and lead to parts of the game having much muddier and blurrier backgrounds than other parts.  In particular, some environments in the Aqua Ring portion of the game left me scratching my head as I questioned why they looked so inferior to other locations. 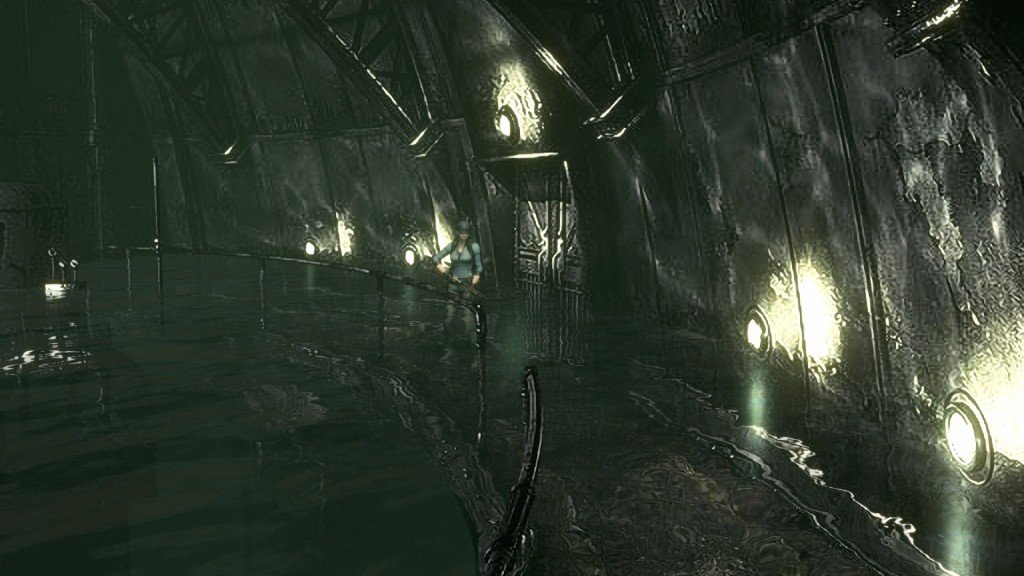 The quality of the backgrounds can be inconsistent and sometimes muddy.

All of this, of course, is best experienced at the slick 60 frames per second that the game runs in.  You’re welcome to cap the framerate at 30 if you so desire, but I was able to play through the entire experience on my PC at the highest graphical settings without any dropped frames.  The HD Remaster also supports 16:9 widescreen in addition to the original 4:3 aspect ratio – this setting can be easily and instantly toggled in the in-game menu.  The widescreen support is top-notch, and the scrolling that it results in across each static camera angle feels completely natural.

As previously mentioned, the game’s areas all still exist as individual zones cordoned off by gates or doors that serve as loading screens.  These loads can be irritating to anyone spoiled by the wonders of modern processing and the advances in game loading within the last several generations but were never long enough to seriously become a nuisance.  Due to this not-so-open world method of loading, don’t expect any radical change in your escape from enemies by ducking into the nearest door – they won’t be following you.  While it could have been a terrifying addition for a Hunter to pursue you doggedly through the different rooms of the mansion, this choice ultimately works in favor of the game’s balance and dedication to reproducing the original game rather than reinventing systems.

Aside from the visual and sound upgrades (the game now supports 5.1 surround), the game offers several updated control schemes.  For the PC release, there are now mouse and keyboard controls which are functional, although a gamepad remains the best way to play the game.  A new alternate control scheme is also offered for the gamepad, which replaces the original release’s dated controls with a much more comprehensible and modern system. While the static camera angles can be very disorienting and drive home how far third-person control has evolved in the past decades, I found these new alternate controls to be a huge improvement and make the experience of playing through a technologically dated game much more intuitive. 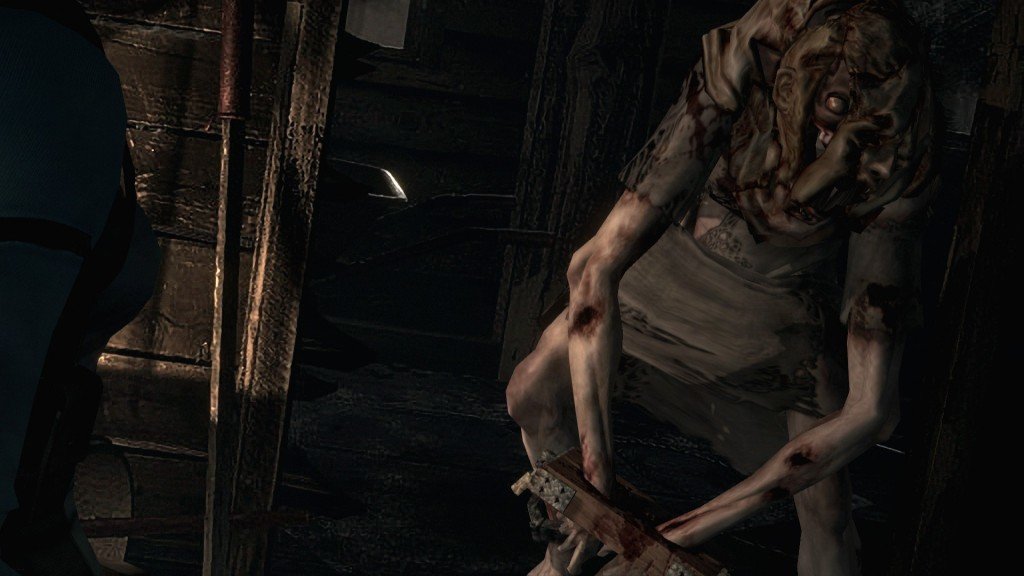 All of the content added in the GameCube remake returns.

The actual content of the game remains very faithful to the 2002 re-release, with the additions of that version making it into the HD Remaster intact.  Outside of an additional costume option for each character at the outset of the journey, there aren’t really any significant content additions of note; faithful to a fault, the core experience of playing through the original Resident Evil remains very much intact.  The game has matured fairly well, though it can be a very frustrating experience at times.  The core gameplay loop of finding endless crests, medals, and masks hasn’t aged quite as gracefully as the game’s combat, and a significant portion of the game’s difficulty arises from fighting the controls and sometimes baffling camera angles.  For potential newcomers looking to fill a gap in their gaming knowledge, just expect and understand that no matter how much polish is applied, Resident Evil remains at its core a game released 19 years ago, and plays accordingly.

With that caveat in mind, it should be noted that the game still plays much better than the majority of its contemporaries and can easily be recommended to those that missed out on the experience over the last twenty years.  For veterans looking to “enter the survival horror” and experience the schlocky B-movie thrills once again, the technical modernization and low price point (only $20 at release) make the investment in this rerelease a no-brainer.  A successful revitalization of an all-time classic, Resident Evil HD Remaster stands out as simultaneously both one of the best HD rereleases in years and the best Resident Evil game on the market in some time.