Remakes and remasters have been extremely popular with the start of the new generation of consoles. DMC Definitive Edition is a double hitter as it is a retelling of the classic series Devil May Cry and an HD port from 2013. Dante has returned in 1080p and moving at 60 frames per second. With a crisp look and solid gameplay DMC Definitive edition is the best way to play Dante’s most recent adventure. That is if you can get past some of the annoying aspects that follow our half demon and half angel hero. 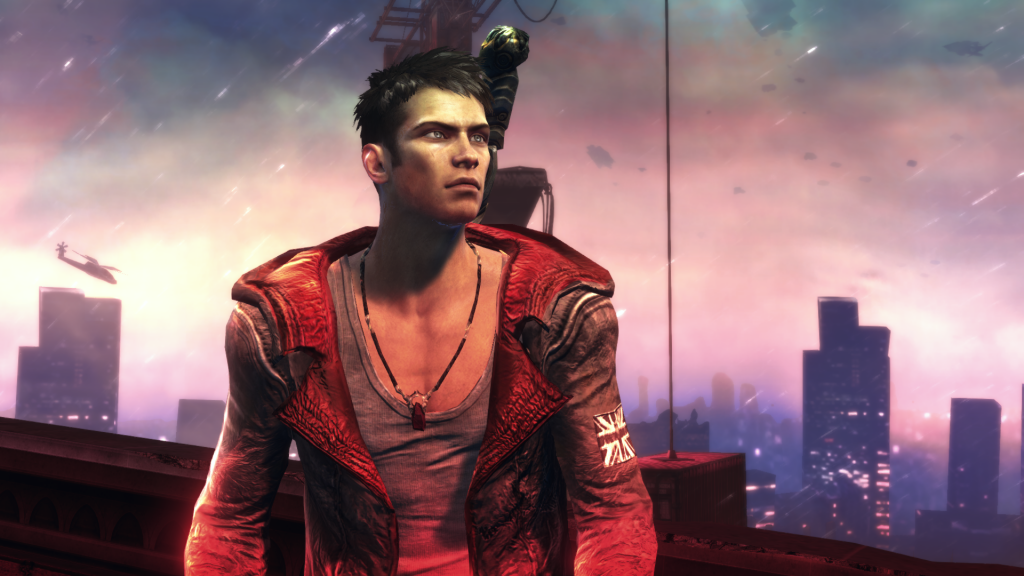 Dante is loud, cocky, and angry. Dressed like someone who just got out of a Muse concert Dante returns along with his main sword, the rebellion, and his pistols, ivory and ebony. Dante has a one liner for almost every situation and I couldn’t tell if Ninja Theory was trying to create a B-movie story or if it was unintentional. There were times that were completely cringe worthy and any real interest I had in the story was thrown out in the very first cut scene. I was bummed to write of the story so quick, but as the game progressed I was only reassured of my premature decision. The story is laughably bad and easily predictable. Bad stories can be great if done right. Getting in a shouting match with a gigantic bug like demon that uses puke, as a weapon was one of the most head scratching scenes I have ever witnessed. While I didn’t enjoy the characters, the world that surrounded it was beautiful and had some interesting ideas. 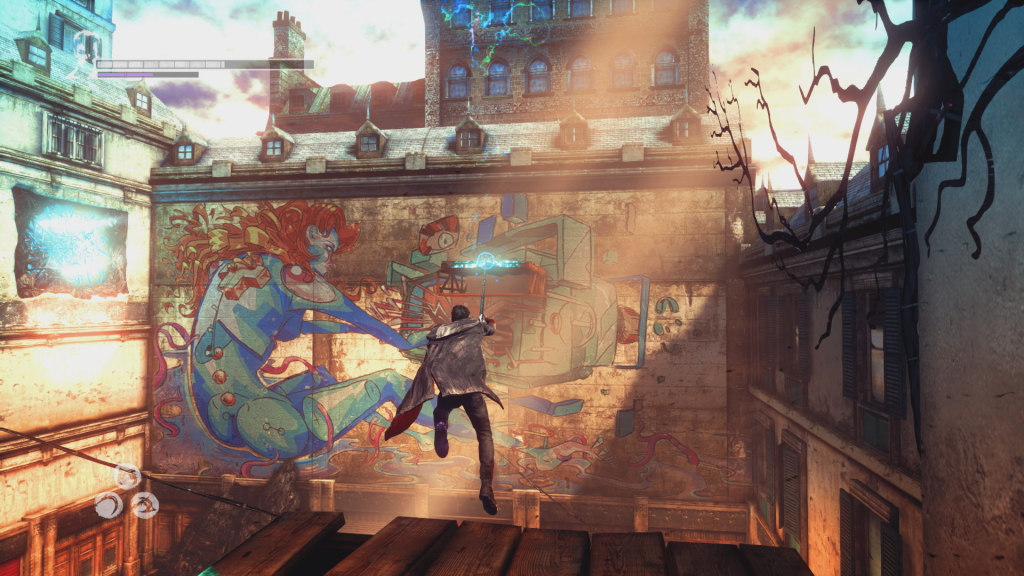 The game takes place in Limbo City, a city where demons seemingly control humans without them ever knowing. Most of the game takes place in between Earth and hell. I wasn’t sure how I kept being dragged into to limbo, but I didn’t care. Once in limbo the world came alive. Roads broke and shifted as I walked through admiring the scenery. Each area had a distinct look, yet they had a cohesive art style that had a punk feel. The colors popped and made the game easy on the eyes. With the definitive edition being 1080p every thing looks a bit crisper. That being said this game doesn’t push the platform in terms of graphics. Character models look nice and colors stand out, but there are some rough textures. Enemy models are creative and have a very grotesque look to them. I was happy anytime they introduced a new enemy just so I could admire the details in their design. Sadly anyone who is not a main character looks blurry and out of focus. The game runs smoothly and I never once had any frame rate problems during my time with the game.

Dante’s new modern look is also accompanied by some shiny new weapons Dante also gets some new toys at his disposal. Access to demonic and angelic weapons opens up the combat allowing for some truly diverse encounters. Dante has access to over 9 different weapons that include a shotgun for big damage to single enemies and quick striking scythe that was my favorite. Battles boil down to using the right weapons at the right time. Early on in the game players can rely on certain combos and tricks in order to dispatch the grotesque enemies on screen. This quickly goes away as many demons are only damaged by one weapon. This forces players to dig into their arsenal and be more diverse with attacks. It’s also a bit frustrating, being forced into using a certain skill set that may not fit your play style. All these weapons can be upgraded with new moves and damage multipliers. Being able to test the skill out before pointing a point down is a cool feature, but I never used it because skill points can be retracted for no cost. If you decide you like one weapon over another you can siphon some skill points from one to another. It’s a deep system that works well and really lets the player find what is best for them. 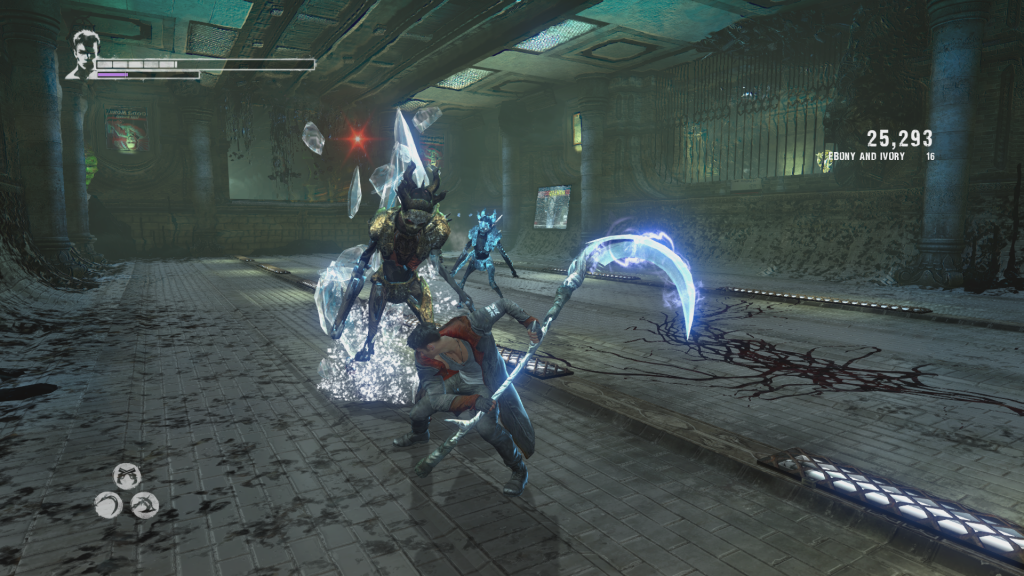 The combat system is fast paced and brutal while combos come quick and easy. The most basic way to get through a section is to jam on the main attack button. In order to build up the highest score possible players will have to mix attacks and chain them together as quickly as possible without taking damage. Players can launch foes up in the air and finish combos mid air. I often found this the most effective way of killing enemies as the floated helplessly. After shedding enough blood devil trigger can be activated. This taps into Dante’s true power and slows down enemy movement and throws them into the air for easy combos. The devil trigger meter is quite slow to fill up and burns out way to quickly though. It’s a fun mechanic that could have been a lot more refined.

The ability to be able to grapple opponents allows players to yank demons right to the player leaving them open to pummeling. Grappling also lets players zip up to their victims in the air or the ground. The grappling is also used in the many platforming sections. The platforming is simple and the punishment for falling isn’t harsh, which results in an enjoyable experience. Ebony and ivory also aid in keeping combos alive in between stabbing enemies repeatedly and allow people to strive for the triple S rank. It was always satisfying to hear the announcer yell “savage” in his deep unrelenting voice. The rank system adds some replay ability to the missions, however it feels a little old school much like the rest of the game. 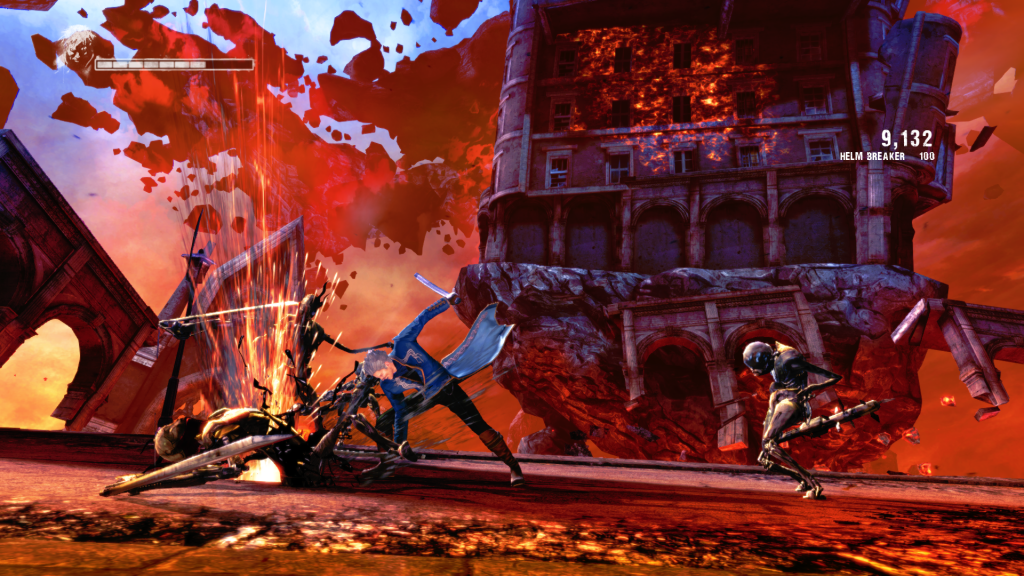 Despite its absurd narrative and annoying characters I enjoyed my 10-hour romp with Dante and his friends. The combat has a nice weight to it and even the simplest of players can pick up and get right into the action. I loved flying around with my grappling ability from enemy to enemy chopping them up into bits. The story and aesthetics seemed like a fever of an angsty teenager and muddled up what otherwise was a great action game. Coming in at only $40 dollars DMC Definitive Edition packs in all the dlc including the Downfall of Vergil, which puts you in the shoes of Dante’s brother. There are also tons of different difficulty levels that will push your demon slaying skills to the limit. DmC is also littered with collectables making returning to previous missions worth it for the collector. I just didn’t see any point in collecting them when they only really effected my end mission score. Overall Capcom has rereleased a game that may have been over shadowed at launch and deserves another chance. However with all the new experiences tailored for the PS4 and Xbox One it might be hard to make room for this one.

This review is based on a review copy of the PlayStation 4 version of DmC: Definitive Edition published by Capcom