Pokémon Shuffle—a match-three tile swapping puzzle game, and Candy Crush clone, released on the 3DS eShop recently, is the first true mobile-like F2P game released by Nintendo and comes complete with micro transactions and time locked game play– a design choice that also breaks away from standard Nintendo business practices and is undeniably emulating the pay-to-win, or wait-to-play, cash gate design of most F2P mobile games. Despite the overwhelming dominance of the Free-To-Play business model on mobile platforms, Nintendo has mostly avoided venturing into the F2P game space altogether, opting instead to offer their own solution by releasing a few free titles on eShop that provide fully playable demo-like experiences with optional paid content made available on the back end instead of requiring real cash in order to keep playing. While having one singular entry in the F2P game genre isn’t quite enough to make any predictions about what Nintendo’s future business practice may entail, it certainly marks a significant turn for the company worth noting because they typically aren’t known for following outside trends. It might simply be the case that they’re late to a lucrative game and are just trying to catch up with everyone else? 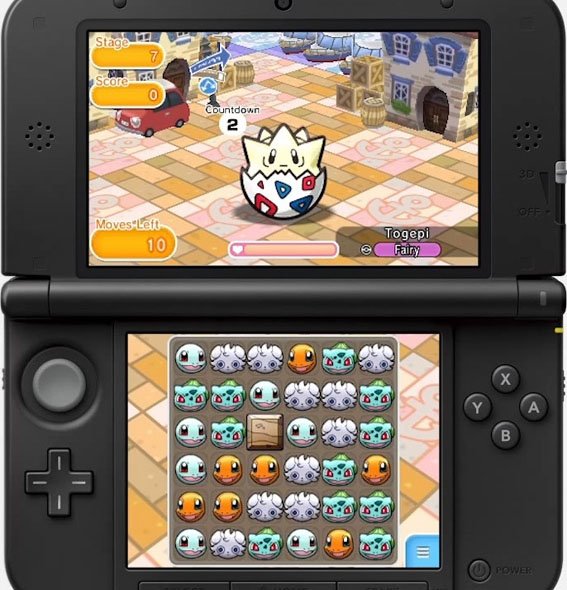 Pokémon Shuffle itself is really quite simple and intuitive. All it requires is matching tiles to win, emulating the many free to play Apps available on mobile platforms these days, except the main draw of the game here is the Pokémon theme. More specifically, the game is made up of 150 stages, each starring a particular Pokémon you can challenge and catch to add to your collection. After you start a stage, the bottom screen is filled with tiles (in a 6×6 grid) featuring different little Pokémon faces which you swap around with the stylus pen attempting to match like tiles to create combos.   Creating combos translates to damage points which affect boss Pokémon on the top screen and you have a limited number of moves allowed to defeat that Pokémon and clear the stage. If you manage to defeat the boss you will get a chance to capture it so you can collect it and add it to your party for combat in later stages. The capture success rate is determined by a percentage meter, which varies for each Pokémon. If you finish a stage with extra moves left, they will be added to the percentage meter giving you a better chance to capture and collect the Pokémon you defeated, or you can opt to spend in-game currency to increase your success rate.  Unlocking the next stage simply requires defeating the Pokémon being challenged without a need to capture it. Rinse and repeat this process for each stage and you get the core game play.

Depth and strategy are kept at a minimal here. Being a Pokémon game, there is a very light component of depth carried over from the handheld series–mainly when it comes to Pokémon attacks and their element types. Some Pokémon bosses do use elemental attacks that affect the tile board on the bottom screen. In most cases they lock tiles by using their abilities like  freezing or turning tiles into wood or metal, ultimately making it much more difficult to clear the board or create combos with limited moves—especially when you have 5 or less moves to clear a stage. You do have the option to customize your party, made up of 2-3 Pokémon you’ve captured which includes a leader Pokémon which has the ability to evolve during game play, increasing damage output.  Although customization is handled automatically by pressing an ‘Optimize’ button before each stage, your party arrangement will be more effective if you use Pokémon with abilities, or element types that the Pokémon you are challenging has a weakness to.

Attack of the pay wall! The game tutorial does a good job of leading you into the game by showing you the gist of the core game play and gives you some easy wins before it starts locking you out and asking you for real money to keep playing. After you clear a couple of easy stages and collect a few Pokémon, the game starts to limit your play time by only allowing you five chances (win or lose) to play at a time, represented by hearts, and then you can only keep playing after those hearts replenish– you get a new heart every half-hour or so, capping at a total of five. Occasionally the game will reward you with crystals which you can exchange for hearts in order to keep playing, or you can spend real money in the eShop to buy crystals to exchange for hearts. What’s more, you can also buy items with the coins you’ve won from clearing levels before each stage that offer boosts that provide extra moves, or increase experience points for your Pokémon, etc. Aside from the standard 150 stages to keep you busy, the game also features extra modes which allow you to try more challenging puzzles, against a countdown timer as an example, or offer daily battles which sometimes feature legendary Pokémon. The game also offers daily rewards just for checking in online as well, which may sometimes include crystals. Of course, as is typical in Pokémon games, the appeal here is to ‘catch them all’, but the wait to win design might be discouraging. 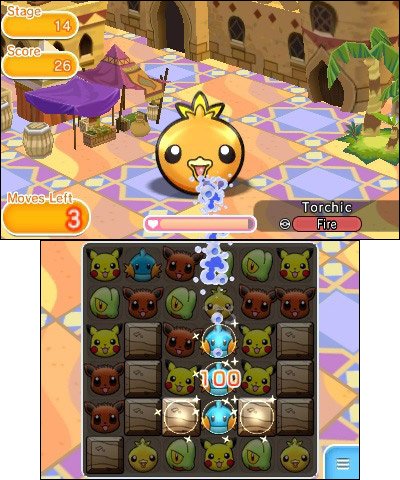 I have to say that I’ve played quite a few free to play games on iOS without ever spending any real cash and was able to enjoy them. Part of this reason is because mobile games aren’t really designed to be played indefinitely in a marathon session, but are more or less designed to be played when you have a bit of time to waste here and there, but they can still offer depth and complexity in certain instances, like the F2P Terra Battle which is a deep RPG with combat based on a simple tile swapping system, but offers lots of customization, tons of characters to add to your ranks, variety of enemies, interesting narrative, amazing sound track, visual effects and challenging combat. Despite it having a pay wall and time locked progression, I’ve gotten pretty far into that game and quite enjoyed all of my time with it. Terra Battle sets a pretty high standard for F2P games in terms of content and quality in my opinion and I usually base the quality of other F2P games based on that.

My main issue with Pokémon Shuffle is its presentation, considering the source material and popularity of the series it’s based on. The game has a very uninspiring, flat, plain 2D look to it all which makes it all feel so underwhelming. It doesn’t use the 3D function of the 3DS at all and of all the F2P games to have emulated, Nintendo could have chosen to copy something of better quality like Terra Battle or the game Shuffle can attribute its most obvious influence to, Puzzle & Dragons which is being released for the 3DS soon.  Aside from that issue, the game is perfectly serviceable for a F2P game. I usually keep my 3DS on my desk and play throughout the day, every day for the last couple of weeks and so far I’ve cleared half of the stages without spending any real money or felt the necessity to—and I’m still playing through it. I didn’t feel like I needed more than five times to play each session either, since the puzzles are very simplistic and you can get through them rather quickly. I suppose if you’re a Pokémon fan or enjoy match-three puzzle games and don’t mind the wait to win design you might want to download this one. It’s free. It is what it is, but I’m also hooked?

Did you like this? Share it:
Shuffling Into New Territory | Pokemon Shuffle Review
The first foray into the free to play territory for Nintendo isn't bad, but could be better.
Positives
Negatives
6Overall Score
Reader Rating: (0 Votes)
0.0