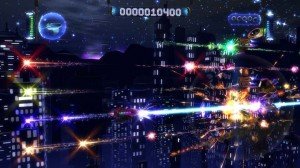 With Guitar Hero gone and Rock Band on a break, there are not many music games out there. However, it looks like the music-action game isn’t dead quite yet, as can be seen with the release of the Playstation 3 exclusive Retro/Grade, one of the best new games to hit the PSN in some time.  Retro/Grade doesn’t look like an ordinary guitar game; it’s perfectly playable (and in some ways more so) with an ordinary Dual Shock 3 controller. Retro/Grade’s concept is that it’s actually an arcade shoot-em-up with side-scrolling action. However, in Retro/Grade, something has gone wrong. At the end of the game, Rick Rocket, who is the hero, discovers that all his fighting has created a rupture in the space-time continuum and the only way to fix this is by travelling backwards in time and erasing his every move. So get out your Playstation guitar and your money, as Retro/Grade will be worth your while.

It is hard to say that Retro/Grade has any real faults, as there are only ten tracks and levels. However, there are several difficulty 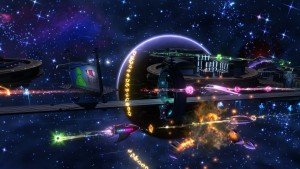 levels, not to mention the challenge mode, where you go across the galaxy replaying missions with different waves of enemies or different success and failure conditions. The graphic art is perfect, with an old-school arcade and a bit of neon retro mixed in. It all looks and sounds spectacular. The names of the levels and the short narrative descriptions show a love of gaming culture. The biggest issue is the use of original music instead of licensed tracks that you know and love. It is a double-edged sword, though, as the original tracks from Skyler McGlothlin are fantastic, with big loud beats and nice soft bits mixed in, making them marry with the gameplay very well. However, if they had licensed well-known tracks, it would have been extremely expensive for the small indie development team. Retro/Grade is a brilliant game, but the appeal of a rhythm-action game is getting to interact with familiar tracks. It would have been better if it had a soundtrack of eighties pop and metal that we all know. 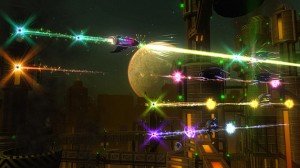 While it seems that there is not much to it beyond getting in the right line at the right time, the timing does turn out to be more crucial than you might think; if you get to the line early, you may hit enemy fire, and if you get there too late, then that is another bullet missed. You will fail, but not all is lost, as Retro/Grade is generous. You can engage a score boost with a Guitar Hero Star Power move, but there is also a handy fuel gauge that lets you rewind the last few seconds at the touch of a button or by simply wiggling the whammy bar. You can also redo the part that cost you most of your life, or simply make sure you hit the bonus notes you needed. There is, however, a bit of balancing that needs to be done, as the fuel you use costs you points at the end of the level. It does turn out that there are advantages to playing with the guitar controller rather than the Dual Shock 3. The first is definitely speed; you will need speed to survive on higher difficulty levels, and the guitar is quicker. Using the Dual Shock 3 involves switching lines with the D-Pad, which does feel slower than the guitar; however, it feels more natural when you’re ducking enemy attacks.

Retro/Grade works in a quite ingenious way, as the action now scrolls from right to left, and it’s your job to take away the damage you have done before. This is done by switching between different colored lines on the screen and launching your cannons at the right time. At the same time, enemy bullets come in from the left and they must be dodged, while robot arms and energy beams attack one 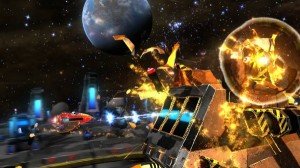 or more lines, forcing you to leave. The trick is that there is a rhythm to the game and that everything needs to be in time with the electronic soundtrack. In a way, Retro/Grade is a bit like playing Guitar Hero, but at the same time, it is no good hitting all the notes if you can’t dodge the enemy fire. There are variations to the gameplay; sometimes, you have to fire longer energy beams, where you will need to hold the button down; there are times when a cluster of missiles will come at you, which you will need to button-mash away. There are some enemies that release black hole bombs, which drag you off in one direction, leading you into a wall of bullets. On higher difficulty levels, it does get genuinely harder.

Retro/Grade is one of the most exciting original games to come to the PSN in a long time and is a must-buy for fans of retro shoot-em-ups or rhythm games. It is not, by far, the biggest or deepest action game out there, but it is still full of smart and unique ideas, and it looks and sounds spectacular at the same time.