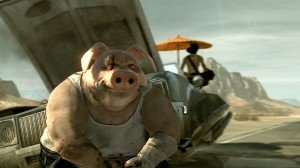 Despite what many of you may think, Ubisoft hasn’t forgotten about the sequel to it’s critically acclaimed game, Beyond Good & Evil.

According to reports, Michel Ancel (the game’s creator) is the current problem holding up the development of Beyond Good & Evil 2.  The problem is that Ancel, unfortunately, has too much on his plate, he is simply too busy at the moment to focus on BG&E2.  Ubisoft CEO Yves Guillemot says:

“What’s very important is that Michel Ancel is kind of doing too many things at the same time. He was working on Rayman Origins last year, and he’s working a lot on Rayman Legends this year. So, you know, when he does that, he kind of puts too much of his time on the other projects that he has.  So the fact is, that working on Legends is slowing the process on Beyond Good and Evil 2.”

Ubisoft first teased BG&E2 with a trailer back in 2008.  Since then very little information has been given about the game.  Earlier this year, trailers believed to be of the game were released.