Plantronics has been developing headsets for over 50 years, but really over the last several years they have been pushing (and making good headway) into the gaming community by developing quality gaming headsets with top-notch sound quality at a reasonable price point. While Plantronics developed and released their RIG audio gaming system last year with much success (check out our original review here), they now have an updated model available, the RIG Surround. Let’s see how the RIG Surround fairs when put to the test. 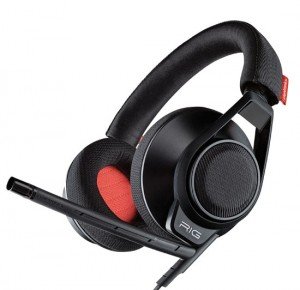 Plantronics headsets are known to produce quality sound, and the RIG Surround continues to follow suit in that regard. With 40mm speaker drivers, you have a good mix of bass along with the crystal clear sounds being produced in your ears. The headphones provide good noise isolation allowing you to really focus on what you are using the headset for (like playing games and chatting to your teammates). One of the crucial selling points for the RIG Surround is the mixer provided which combines your microphone (be it from you talking on your cell phone which is mixed in or in-game for teamspeak). The boom mic has good pickup and provides clear communication to whomever you are speaking to without picking up the background noise from the game which is simultaneously being sent to the headset. 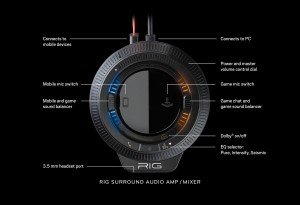 Features: 10
Much like its predecessor, the RIG Surround has a plethora of features which are sure to make a PC gamer happy. As mentioned previously the mixer is the heart and soul of the headset as it contains the ability to connect to and mix in two-way audio from both your cell phone and your PC. At the center of the mixer is a large toggle button. Push the button to the left and your microphone source will be from your phone, push the button to the right and you will be talking to your friends that you are playing with on PC. Next to each side of the toggle switch are two adjustable slides to provide balance between the sounds coming from your mobile phone, game sounds, and in-game chat. There is an additional slider that encompasses the circumference of the mixer which controls the overall volume.

There are three buttons on the mixer which add some additional functionality which users will likely love. The equalizer button provides a quick and easy way to toggle between some presets (pure, intensify, and seismic), which help you get the sound you are looking for depending on the type of game you are playing. The buttons that are by far the handiest are the answer call and mute buttons. There is nothing worse than when you are playing a competitive game online and you get a phone call causing you to fumble around by taking your headset off, answering the phone, while trying to keep playing. With the RIG Surround, everything stays put. Simply push the button on the mixer to answer the call and keep playing, adjusting the volume as needed with the mixer.

Value: 10
When the RIG was first released it was going for an MSRP of $129.99, which was still a great price point. The RIG Surround now weighs in at only $99.99, making it even easier for us to recommend. The RIG Surround is a high quality headset in its own right, but when you take the mixer into account and all of the features that come along with it, $100 seems like a no-brainer especially given the fact that you could spend that much money on any one of the countless headsets on the market which don’t even have the mixer feature.

While there doesn’t seem to be any marketing material about using the RIG Surround for consoles, it is possible, even though the optical port has been removed, which was previously a feature of the original RIG. You won’t get all of the features (most notably is the mixer), but you can just plug the 3.5mm audio cable directly into the controller for use in the next gen consoles. Just note that for the Xbox One you would need the stereo headset adapter that connects to the bottom of the controller, where as for the PS4 you just go straight into the controller itself. 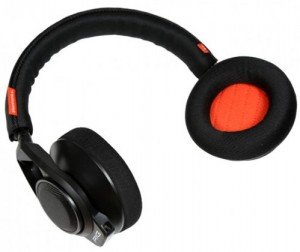 Setup is a breeze with the RIG Surround, despite the multiple cables that need to be connected. The microphone has an attached cable which plugs both directly into the headset as well as the mixer. On the other side of the mixer a single (3.5mm) goes to the headset jack of your cell phone, while the USB cable goes to the PC. As for actual use, once I downloaded the drivers, I was up and ready for action in no time. The mixer is very intuitive to use and switching back and forth between sources is a breeze.

The ear cups are a mesh cloth with memory foam, which provide a very comfortable gaming experience. I played for several hour stretches without any headache or ear sweat. Additionally the ear cups rotate a full 90 degrees allowing them to not only fit anyone’s head shape, but also make it very easy for packing them up and putting in your backpack if you need to travel. 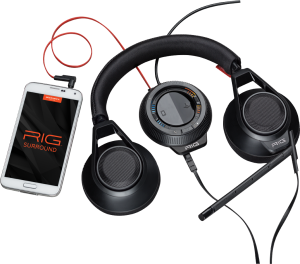 Overall: 9
With the ever-growing variety of gaming headsets on the market, gamers should definitely not sleep on the Plantronics RIG Surround. Quality sound is the tip of the ice burg with this headset, with the mixer really stealing the show. The features that the RIG Surround have to offer combined with its $100 price point, make it a headset that I can wholeheartedly recommend. If you are in the market for a new gaming headset, make sure to check out the RIG Surround.