It seems almost trivial to explain what Super Smash Bros is to anyone nowadays, as it’s become one of the biggest gaming franchises around. Since its first appearance on the Nintendo 64, Super Smash Bros. has become a worldwide phenomenon capturing the hearts of both casual and hardcore gamers. We’re now treated to the first ever Super Smash Bros. game on a handheld, and it runs the game surprisingly well; though it does bring new hardware-specific problems with it, too. 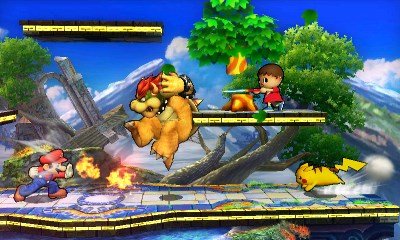 It’s good to be back.

Smash Bros. for 3DS feels like the most balanced and mechanically tight entry in the series. Using the circle pad on the 3DS isn’t the most ideal way to move, but it works efficiently enough within the game. More than ever, characters have distinct advantages and disadvantages; take for example newcomer Little Mac: when he’s on the ground, he’s a spastic fighter that’s hard to face one-on-one, but exposing his weakness in mid-air combat instantly takes away any upper hand that he may have had. This makes learning every character worthwhile, and it’s rewarding to initiate a strategy that forces a character out of their comfort zone.

It’s almost overwhelming how much content is packed into this iteration of Smash Bros. Not only are there a slew of new modes, a lot of old favorites are back, too. There’s the traditional smash mode which you can play with AI or your friends locally; online matchmaking against friends or random players; a new competitive mode called Smash Run; as well as classic mode and other various mini-games.

Sadly, online multiplayer is almost unbearable to play in its current state. Latency issues and framerate drops occur on a regular basis, and with an incredibly fast-paced game like Super Smash Bros., a problem like latency becomes all the more substantial. Playing online against friends in the same room works just fine, but once you try playing against someone just a short drive away, the latency spikes emerge.

One of the most advertised new modes is the aforementioned Smash Run. Your main objective in Smash Run is to traverse through a gigantic stage fighting iconic enemies from classic games starring the Smash roster; by doing so, you can collect power-ups that increase your overall stats, though if you die, you’ll lose a lot of those stats. All the while, you’ll be competing against three other players, which are limited to only AI and friends – so no random online competitors, here. Grabbing as many power-ups as you can is important, because at the end of the allotted five minutes, a randomized final event will occur which can range from racing through a stage, a simple free-for-all match, a team fight, or even a competition to see who can kill the most enemies. The randomized final event often feels unfair and more based on luck of the draw than on skill or strategy. If you collected lots of strength power-ups during your run, it won’t matter how hard you punch if you’re participating in a race against someone who focused on collecting speed. It’s disheartening to spend five minutes working hard to collect power-ups only to lose based on chance and dumb luck. 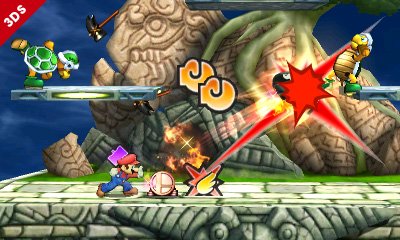 Smash Run is interesting on paper, but not so much in reality.

Once I was done unlocking every character, I was shocked at how expansive the character select screen had become. This Smash Bros roster features 49 unique characters to choose from, and the newcomers fit in right at home with the usual suspects. While some new characters have variations of moves from veteran characters, they act differently enough to make each fighter feel distinct.

Not only can you play as your favorite Nintendo characters, you’ll also be able to customize your Mii and have them join the fray. You can choose to make your Mii a melee focused brawler, a swordfighter, or a long-ranged gunner. Each class feels unique, and you can unlock new weapons, armor, and outfits through the various modes. You can even focus what you want your Mii fighter to specialize in, as there’s three slots where you can equip unlocked equipment, and it will directly affect your attack, defense, and speed.

You even have the ability to assign equipment to the other Smash fighters. These can augment a character’s strength even further, or you can even shore-up a weakness in a character. There’s also the ability to equip variants of every character’s special moves. This changes how each special functions, and it can differ the play-style of a character completely. I enjoyed playing around with the variant specials, as it offered the choices like sacrificing some damage for more speed with Captain Falcon’s falcon punch. While these customization options are fun, you’ll only be able to use them when fighting AI and offline and online play against friends, and that goes for using Mii fighters, too.

There’s plenty of stages to choose from, and even some returning favorites like Corneria and Brinstar make an appearance, too. New stages like Mute City from F-Zero look like they’re stripped right out of a Super Nintendo, and it’s great to see how creative and clever some of the stage design is. There’s a noticeable increase in the amount of map interaction than ever before, though it’s effect can be hit and miss. Having a randomized attack from the map hit you when you’re in the heat of battle can be deflating, but on the other hand it can offer some cheap laughs when someone is randomly victimized.

It’s extraordinary how well Smash Bros. performs on the 3DS. Not only does it run silky smooth, the characters and arenas look great, to boot. Even when the action is heavy and there are a lot of animations going on-screen, rarely did I ever notice any dramatic dips in frames per second that would affect gameplay. Super Smash Bros. may just be one of the best looking games we’ve seen on the 3DS yet.

Even though the 3DS runs Smash Bros. well, there’s plenty of problems that arise from it being on a handheld. For starters, the 3DS screen is just too small to cater to all of the action happening on screen. This review was played on a 3DS XL, and even then, I found my characters would get cut off from the screen, making it hard to use recovery moves to return to the stage. It’s frustrating to have the screen cut off what would normally be seen on a television, and as someone who plays a lot of Ness, being able to actually see where my PK thunder move is going is the difference between making an epic recovery or plummeting to the depths below.

Super Smash Bros. for 3DS is just as entertaining and addicting as past iterations of the beloved brawler. A huge character roster, tightened mechanics, and a slew of new modes establishes an overwhelming amount of content to digest. Though the 3DS proves to be a more than capable piece of hardware to run Smash Bros., its small screen – even with an XL – and unreliable network play hamper what could otherwise be the best Smash Bros. yet. Even with all the hardware specific issues, Smash Bros. on 3DS is still hard to put down. While it may not be the feast we’ve been waiting all this time for, the 3DS version is a nice appetizer until we get our hands on the Wii U version later this year.

This review is based on a retail copy of the game Super Smash Bros. for Nintendo 3DS by Sora Ltd. and Bandai Namco games, distributed by Nintendo.