It seems that anime and fighting games always seem to find themselves in a symbiotic relationship. On one hand you have anime girls in skimpy clothing and on the other you have these girls go up against each other in a battle to the end. This formula has worked for several fighting franchises and even lead to some of those franchises being staples of the fighting community. While Vanguard Princess is certainly a very capable 2D fighting game, there just isn’t enough to set this apart and make it the new fighting game du jour. 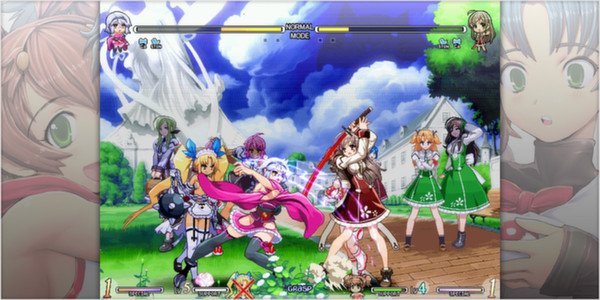 While story is rarely something that makes or breaks a fighting game, this game’s story arch was extremely predictable and derivative. We’ve all heard this one before, but it goes something like this. The government has been conducting a number of secret experiments on a young girl with magical powers. Through the course of the experiments a chain reaction occurs and gives special powers to a number of other young girls. However, the original young girl breaks free from government control and vows revenge on humanity for studying her in that manner. Meanwhile, all the newly powered-up young girls come together to stop the original from killing everyone. As we mentioned earlier, and it lends itself to repeating, story doesn’t really mean anything in a game like this and we didn’t consider it for the final score. However, in case you were interested, the plot in this game was just a loose narrative to tie the characters together.

Each individual also has a side story arch with their own motivations and feelings about the world at large. Some girls just want to fit in and saving the world will give them people to hand out with, some are looking for lost relatives and saving the world will help them find them. No matter what the reason why these girls want to save the world, it all loses context when one girl beats up another girl who has the same end-game motives as they do. It is like if you and your friends are hanging out and you all want to watch TV. Rather than one of you turning on the TV, you mercilessly beat up each other for the right to turn on the TV, when in reality you could have just turned on the TV and saved lots of time and heart ache. This story feels the same way and this underlying feeling of pointlessness never goes away. 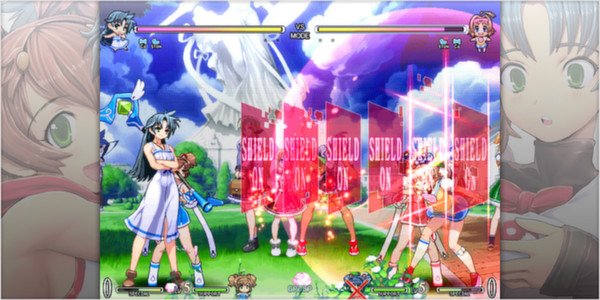 Visually speaking, Vanguard Princess is a 2D sprite-based fighter that looks great. The sprites are very well designed and the backgrounds on which they fight are amazing. In the same vein, the animations themselves are smooth and fluid. All the characters seem to move really well in the environment and it creates a great platform to build a fighter upon. In addition to that, each character has a different set of animations so no matter who you choose to be your champion, they are going to feel unique from all the other options available. However, all is not perfect with the visual presentation of Vanguard Princess. The game seems to have a hard time with established the proper amount of depth and contrast to its characters and backgrounds. While the spites present well with bright colors and smooth animations, the backgrounds also contain the same colors and designs which help the sprites blend into the background. Then when you combine a number of NPCs, support characters and other objects into the stage; your character gets even harder to see. Then when you push all of these objects forward so they are all close to the action, your characters easily get lost in the overly busy landscape.

From a controls perspective, the game controlled quite well, when it worked. We played the game using a controller, but it seemed like this game was meant to be played with a fighting stick. Even then, buttons sometimes didn’t match up or lost their mapping during gameplay. These issues were easily fixed, but having to start and stop the game to reassign you controller was an issue. Also, many of the special moves and finishers felt overly complicated. Some moves required a semi complex button pattern to pull off which doesn’t lend itself to new players. When you consider that the game spikes in difficulty relatively quickly in the game, you’ll be in for a tough time, and if you are just starting out, you’ll want to quit the game soon after. 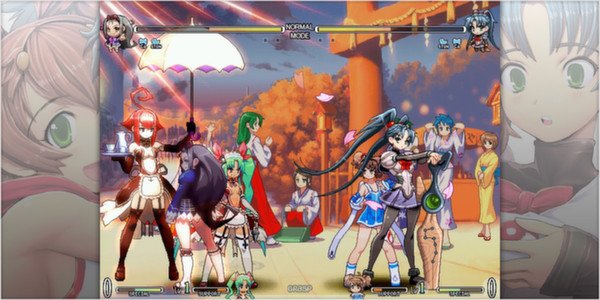 The sound track for the game is one of the best parts of Vanguard Princess. All the tracks have an upbeat song that highlights the action in the game. Many other fighting games blast the music over the action which tends to distract players while they plan their moves. However, Vanguard Princess did a nice job of being in-your-face enough to deliver the expected excitement but subtle enough to not get in the way. Balance is the key and Vanguard Princess nailed it in that respect.

Vanguard Princess also features multiplayer allowing 1v1 and 2v2 matches. This is the same multiplayer you’ve seen from fighters for years, so there really isn’t anything different about this game’s offerings. You can play locally however there is no online netplay option available. This really limits the mass appeal for the game and is a glaring omission from an otherwise solid fighting game. There have been some patches that allow netplay, but that has all been additions from fans and there is no official support for this option. 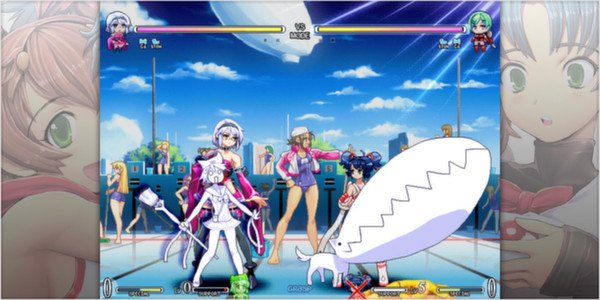 While this all seems great on the outside, it reveals the true nature of Vanguard Princess. This game is solid on all fronts, but it doesn’t do anything that we haven’t seen better before. If you wanted lots of interesting and varied characters, you could play Vanguard Princess, but you’d likely go to something like Marvel vs Capcom 3. If you want fun and exciting finishing moves, you could play Vanguard Princess, but you’d likely go to Mortal Kombat or Killer Instinct. In the crowded fighting genre, it takes more than just being a solid game to make it worth noticing. While Vanguard Princess could easily find a spot in fighting fans’ hearts, there are better fighting games out there that have more mass appeal.

At the end of the day, Vanguard Princess is a solid fighting game. It is certainly not without its problems, but there is enough here to give fighting fans a smile on their face without causing too many issues. While there are plenty of better options out there, Vanguard Princess is worth a look and available on both Steam and Amazon today.