Many games claim that they give you the freedom to do whatever you want, but most of the time that promise is merely an illusion. Most games may give you some level of freedom, but you are almost always bound by some confines. However, when it comes to the Scribblenauts franchise, you have a lot more freedom than you’d expect from a puzzle game. You can literally create any object you want to help you solve the puzzle, whether you want to summon the evil powers of Cthulhu or create a dinosaur to be your personal mount, the choice is yours. Things just got a lot more interested with the latest entry to the Scribblenauts franchise with the introduction of Scribblenauts Unmasked. In this game, the Scribblenauts franchise expands into the DC Universe allowing you to use your favorite DC superheroes to come to your aid. If you thought things were crazy before, you ain’t seen nothing yet. 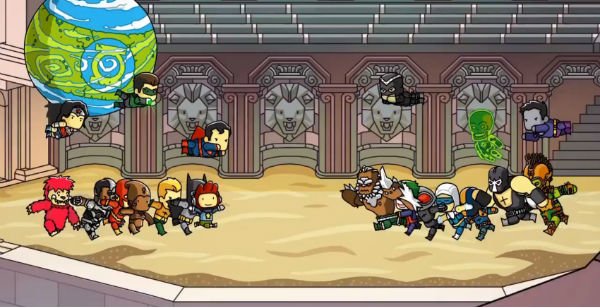 As we mentioned before, Scribblenauts Unmasked mashes up with the DC Universe with the Scribblenauts franchise creating a mix of quirky puzzle-solving and 2D platforming with your favorite DC lore intertwined. In the game, you play as Maxwell, the same kid with a magical notebook that you’ve known since the beginning. Max still has his notebook and you can still use your notebook to create objects in the game. Simply type the object you want to use and it will appear in front of Max. However, in this game, the dictionary of available words includes everything in the DC Universe for you to use and play with. This includes all the DC characters, all their alternate costumes and all their gadgets. Whether you wanted to bring in Superman, Superman from the Red Sun series, or a batarang; this game has it ready for you to use. The object of the game is to help all the DC superheroes with their problems which can range from creating a specific item, to capturing super-villains. Along the way you have to collect stars to power your globe so you can get your way back to your own universe. While this sounds like an easy task, it will require a bit of creativity and problem-solving skills to deal with. While you don’t need to know all about the DC Universe to understand the plot or enjoy the game, knowing your trivia on the subject will greatly enhance your experience.

The game is set up with several superhero-specific worlds for you to explore and work in. In the beginning, you have access to Metropolis, Gotham and OA but others can be unlocked later in the game. In each world, you will have story missions which usually require several puzzles to be solved to complete and several one-off puzzles that can be completed by just creating one item. By completing the one-off puzzles, you earn reputation points and increase your standing in the city and allow you to unlock new worlds. This type of puzzle is found everywhere in the game and they respawn once you leave and come back to that world. You’ll have a hard time finding the end to these puzzles which is always a good thing. Then there are the story missions which are always more involved but they always seem to demonstrate a great understanding of the DC Universe. DC Comic fans will thoroughly enjoy the references and missions, while the casual fan will enjoy the challenge and the new story elements introduced. It really is a win-win situation for comic fans and gamers alike. 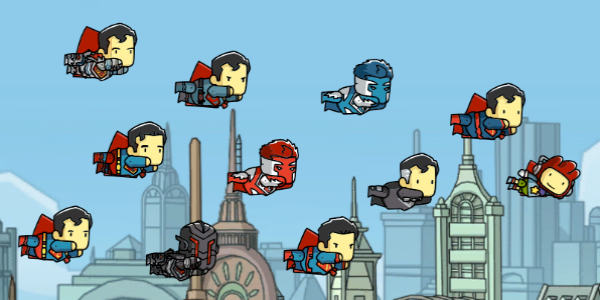 While most of the puzzles were fairly straightforward in their design, there were several that required a rather strange solution to do properly. Things that would make sense, are inexplicably not allowed causing some frustration in the process. For example, there were several instances where creatures were summoned to attack me. I created a superhero to help me out, however once the hero was spawned, he just stood there and watch the creature attack me relentlessly. I would have assumed that since I was helping the superheroes, that they would feel compelled to save me from dying, but more often than not that wasn’t the case. There were also certain objects that didn’t work the way they were intended like things that made you invisible or bomb technicians. There were a few instances where I called in several bomb techs to disarm Mandello’s explosive devices only to have Mandello kill all my techs and set off the bombs even after they were deactivated.

However frustrating the logic can be at times, the saving grace of the series is flexibility built into the franchise and all the ways you can complete each mission. You can call in Superman to wipe out the bad guys or you can summon weapons for you to use, both yield the same victorious result. In this game your imagination is the only limitation and having a game that actually makes you think is something that is quickly becoming extinct in the gaming world.

Overall, Scribblenauts Unmasked is a great game. While the series doesn’t really change much since the last game in the series, it does take a proven formula and it makes it fresh with the addition of the DC Universe. This game does play into the comic fan’s territory, but with little ingenuity you can get by. If you are looking for a game that challenges you to think outside the box while still maintaining its fun factor, you need to get your hands on Scribblenauts Unmasked. Not only will it remind you of all the great DC characters you know and love, you get to experience the fun that is inherent in all Scribblenauts games. Therefore, we highly recommend this title for anyone looking for their next gaming experience.

This review is based on a review code for the PC version of Scribblenauts Unmasked developed by 5th Cell, published by WB Games