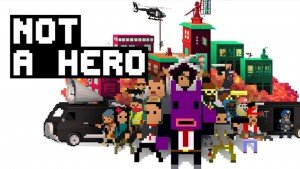 This game is Not A Hero…
or is it?

Not A Hero seems to have been inspired by some of the 2D greats like Super Meat Boy and Worms, though I’d say it’s is best described as Hotline Miami meets OlliOlli, which is perhaps no big surprise as the game’s developers (Roll7) are the guys behind the OlliOlli series and its publisher, Devolver Digital, boasts Hotline Miami as one of its previous hits.

This game is a fast, frenetic and frisky foray into a twisted world of election campaigning, bonsai tree collecting and panda-saving.

You’ll play as one of a handful of bizarre characters, each with their own attributes which we’ll look at later, who are helping “BunnyLord” (a giant, purple, time-travelling rabbit with mayoral aspirations) in his mission to be elected as mayor and save the world from alien invasion and total destruction.

Don’t worry – It’ll all make sense when you play it.
Actually, no it won’t, but that’s not a bad thing.

BunnyLord’s campaign plan is simple: Rid the streets of crime. He believes this will win him enough votes to become mayor. The trouble is, people have tried ridding the streets of crime before, but it never works. BunnyLord’s idea is different, though. If you eradicate the criminals, you eradicate the crime. With that in mind, he recruits a ragtag bunch of misfits to hit Britain’s pixellated streets and terminate with extreme prejudice.

Each playable character has a different skill to encourage different play styles. In a nice design decision, the choice of whom to use each time is left up to you. To begin with, you’ve just one character to play as Steve – A pistol-wielding cockney with an amusing potty-mouth and the ability to trip up any enemy he slides past. If you trip them, they’ll fall to the ground for a few moments and while they are down there, you can execute them for an easy kill. As you progress you unlock a further 8 characters including Mike, an alcoholic, shotgun-swinging, Northerner and the rambunctious, Welsh, party-girl, Samantha who, unlike other characters, can run and shoot at the same time. 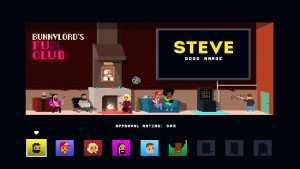 Each level contains hidden pick-ups and power-ups which either bolster your arsenal or upgrade your weapon temporarily. These range from hand-grenades to cat-bombs and from flame-throwers to lasers. Each one on offer has some major advantages. Lasers, for instance, will instantly evaporate any enemies, so taking on large groups of them becomes much easier, or the cat-bomb will “Meow” its way to an enemy before ending their day in a shower of flaming whiskers and kitty-kibble.

There are no points awarded for how you kill people, nor for how many people you kill; the game instead offers you 1 central objective, along with 3 optional ones on each level. Complete the main objective to move on, or complete all four in one run to ace the level.

“The trick to mastering the game is to complete all the objectives in one go.”

These optional objectives vary by level. I won’t spoil the story by telling you the specific ones, but the others are a mixture of things like “Kill Everyone”, “Save All The Hostages” or complete the level in less than however many seconds or with fewer than a certain number of shots fired or hits taken. The trick to mastering the game is to complete all the objectives in one go. This is especially tricky on the timed levels, as the precious seconds don’t seem long enough to get to the end in one piece, let alone collect 3 milkshakes, perform half-a-dozen executions and rescue the up-turned turtle, for example.

As you can probably tell, Not A Hero is more than a little odd, but it works. The off-beat, somewhat British humour and frequent foul-language actually make for some pretty hilarious situations. Even the briefings for each level are created from a mish-mash of pre-prepared phrases which are fused together on the fly, meaning every level’s introduction and final debrief are utterly ridiculous and often highly amusing. 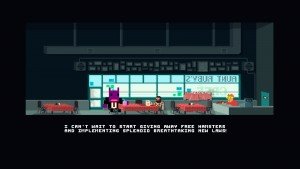 “As you can probably tell, Not A Hero is more than a little odd…The off-beat humour actually makes for some pretty hilarious situations.”

Ideas like the random phrases are what keep Not A Hero fresh. It’s as much a puzzler as it is a shooter which reminded me, like I mentioned earlier, of Hotline Miami, but that’s not where the similarities end. If you die, you simply hit the touch-pad and instantly restart the level. The main difference being that Hotline‘s frequent checkpoints meant frustration was avoided as you simply reset to the beginning of a certain area which kept your enthusiasm and momentum going. In Not A Hero a restart sends you right back to the start of the level, which is extremely annoying if you’ve completed all the objectives and are heading for extraction, as an enemy who was lurking in the shadows shot-gun blasts you through an 8th storey window, you break your legs from the resulting fall and fail the mission. After a few attempts, the first half of the level will be almost second nature and having to keep going over old ground becomes a bit of a chore and is the game’s main detractor. I couldn’t help but feel as though the forced restarts were there to make up for an overall lack of content. Especially towards the end, levels will take countless attempts to finish, which feels like a grind once you’ve memorised the first half of the stage but are forced to replay it over and over like a nightmarish Groundhog Day. That’s without acing the level and literally just getting to the end.

“After a few attempts, the first half of the level will be almost second nature and having to
keep going over old ground becomes a bit of a chore and is the game’s main detractor.”

Most of the times I became frustrated were when I faced any form of ninja. On later levels, they’ll duck to dodge your bullets, so you have to empty a clip into them and slide past to avoid their katana, before turning back to empty a second clip, usually whilst other enemies are shooting at you. One particular time, I’d wanted to leap over them, turn on a dime and then shoot them to death – I knew it was possible, I’d done it before – but for some reason, this time, a nudge of the stick after landing the jump to turn and face them, sent me walking into the spiky end of their swords to my instant-death on more than one occasion.

Despite this mishap and a few other blips, the generally slick and precise handling let me complete certain sections like a true bad-ass; I jump down from the floor above, land on and knock-out an enemy, shoot his buddy at close range for an instant kill, execute the guy on the floor, slide through a doorway to KO another one, drop a grenade, duck into cover, shoot the reinforcements, ignite an explosive barrel, use the explosion to boost-jump through the window and across to the next building, arm a bomb, run for cover as the bomb explodes, killing a guy with a heavy machine gun before I jump into the chopper and fly off, ending the mission! Phew! 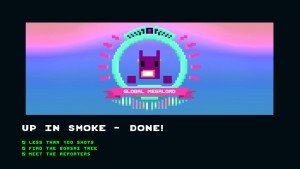 Once you become more adept with the various mechanics and quirks of the game, you can play every level like that and that’s how you’ll need to play to achieve the top rank of Global Megalord and truly save the world. Similar to how Hitman or (again) Hotline Miami should be played, you learn the level as you go, which lets you figure out the perfect sequence of moves, so you might mess up for 5 attempts, but that 6th time will look so silky smooth you’ll feel like the greatest Not A Hero player ever.

“…you might mess up for 5 attempts, but that 6th time will look so silky smooth you’ll feel like
the greatest Not A Hero player ever”

The menus and character/level selection screens are quick, simple and responsive which allows you to play quickly and they don’t slow the game down as you finish one swift and speedy section and move on to another. The visuals are basic to fit with the pixellated style (which works well) and the clarity is generally good, although later levels have so many enemies piling on-screen and into the same room, that it becomes difficult to see where your character is, which often results in yet another frustrating death.

The music (mostly 80’s Techno) is well-suited which, if not amazing, suits the game and is inoffensive enough, while sound effects and voices are satisfying.

At the current PSN selling price of $12.99/£9.99, it‘s worth waiting for a price-point that is maybe 20% lower. As I’ve said before, this game is not perfect and is frequently and fiercely frustrating – In fact, it’s one of the most irritating games I’ve played – Though at its heart, the gameplay is good fun, especially for the first two-thirds of the game and you get a variety of ways to play using the 9 different characters. If you blast through the main missions and only complete the odd side-quest, you’ll see about 4 hours of it, or if you like to 100% your games, it’s closer to 6 or 7. There’s no Platinum trophy on offer here, mind you, and only a sprinkling of Gold, Silver or Bronze ones to collect, so the replay value (especially for trophy-hunters) is limited.

“No amount of written words can explain Not A Hero, it must be played to be understood.”

No amount of written words can explain Not A Hero, it must be played to be understood. Once you get the controls down pat, you’ll rocket through the supremely stylized, pretty & pixellated stages like an 8-Bit 80’s action hero, which is lots of fun though the lack of depth wears thin towards the end and the extreme difficulty spike in the final third feels cheap. Despite its flaws, it’s still enjoyable which is what really counts. Roll7 now have a couple of quality games under their collective belts, so they may be a developer to watch out for in future and I expect we’ll be seeing a sequel sooner rather than later.

This review was based on a review copy of the PS4 version of Not A Hero developed by Roll7 and published by Devolver Digital. Also available for PC, Not A Hero has an XBox One TBC release date of 2016.

Peculiar Pixels | Not A Hero Review
As ways to spend your time go, I can imagine worse than an afternoon or two playing Not A Hero. The story may be no great shakes, but when you can blow people up with an exploding cat, I don't think story is at the front of your mind. It's let down a little by its relatively short duration, sporadic difficulty spikes and a general lack of variety in the missions. The moments when everything clicks and you tackle a stage perfectly aren't quite enough to nullify these problems, but nevertheless, there is plenty of fun to be had.
Overall Score7
Positives
Negatives
2016-02-23
7Overall Score
Reader Rating: (0 Votes)
0.0