Fishing generally is a love/hate hobby. Some people find it relaxing to spend time in silence waiting for a fish to grab onto some bait, while others see it as a dull, pointless experience. Carps & Dragons for the 3DS (originally released as Fish’em All on WiiWare in 2009) looks to make fishing more exciting, but ultimately fails to accomplish appealing to either side of the fishing spectrum.

In Carps & Dragons, you play as one of two fishing hillbillies, named Jack and Walter. Nothing is ever explained as to why these hillbillies are netting fish, and more importantly – why are there dragons around? It seems completely out of left field. The only interaction with dragons are when they attempt to stop you from catching fish by launching fireballs at your character. It seems a rather odd fit for a fishing-oriented game, and its unexplained nature left me wondering why it was included in the first place.

The gameplay is simple: you jump around on a 2D plane, using your net to catch as many fish as possible. Catching fish builds up three empty fish medals, which your goal is to fill as many medals as possible within the allotted time. While at first the gameplay was entertaining, its inability to change the formula to keep the game fresh and exciting made Carps & Dragons grow very tiresome, very quickly.

Carps & Dragons offers three game modes: arcade, where you try and catch as many fish as possible in the allotted time while avoiding obstacles; challenge, which offers some differing scenarios to complete; and fishtris, a interesting take on Tetris. The latter mode, fishtris, is the most entertaining mode since it makes strategy a much more important dynamic than just swinging your net around and getting as many fish as possible. Catching the same colored fish in a row is the only direct way to gain points, and you have a limited amount of space in your storage before you lose. While it can still grow tiresome, it’s still a lot of fun to pick up for short sessions. 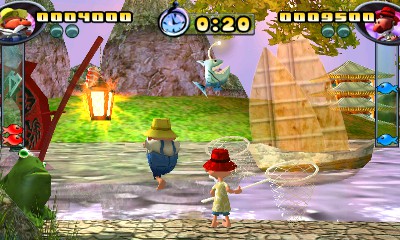 The multiplayer in Carps & Dragons can actually be an enjoyable experience. Jumping around catching fish with a friend can add some fun to the game, but even with a friend, the game still becomes dull after prolonged play.

While Carps & Dragons may not be the most endearing title, it still can be a fun title in short bursts. Generally poor visuals make the experience rather boring, something the game’s repetitive gameplay couldn’t help, either. If you’re looking for a cheap game to play while on the go, some fun can be had with Carps & Dragons, but there are much better titles to spend your time with on the 3DS.

This review is based on a review copy for the game Carps & Dragons, developed and distributed by Abylight.

Did you like this? Share it:
Fish Out of Water | Carps & Dragons Review
Overall Score5
Positives
Negatives
5Overall Score
Reader Rating: (0 Votes)
0.0