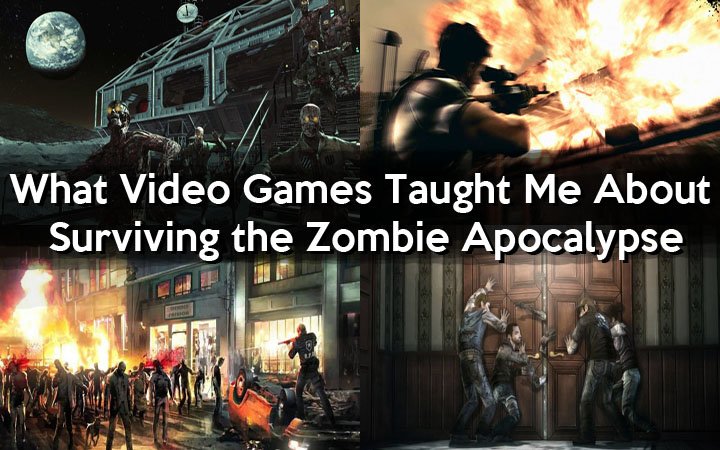 Zombies are literally everywhere, from video games to television to the movies. Even the Bible itself talks about the dead rising from their graves. With all the hype surrounding the zombie-phenomena, it seems like it is almost likely that zombies are coming to town. Always being prepared is something that is certainly important, and surprisingly enough, there is a lot that video games can teach us. What exactly is there to learn from a game? Well, each franchise has something different and unique to teach us, so let’s delve deeper and get into some specifics of what each franchise can teach us about surviving a zombie apocalypse.

Don’t let this be you.

Resident Evil features a cast of characters that always finds themselves in the middle of a zombie-infested city. This also happens to coincide with one of the most important zombie survival rules: stay out of the city. Everyone knows that over half the population lives in big cities. This is also where the zombie infection is most likely to spread first and where you are going to find the most zombies during an apocalyptic scenario. If you notice from Resident Evil 6, Neo-Umbrella didn’t drop the zombie gas on a farming community; they chose a major city. Do us, your survival group, and everyone else a favor; you aren’t Leon Kennedy, so when you hear word of zombies running around in the city, you run away from it.

So you are taking the trip of a lifetime and you find yourself on a trip to the moon. You are teleported to a moon base when, all of a sudden, all of the astronauts working on the base turn into zombies. Sure, it’s a crazy scenario, but it isn’t without a lesson. We all like to think that when you go on vacation, you’ll be able to buy or find everything you need. Chances are that this line of thinking is going to put you in jeopardy should zombies suddenly appear. Now, let’s get this straight; we aren’t suggesting you bring weapons when you go on a holiday. However, we feel that keeping your physical fitness levels high, and even a martial arts class or two, will serve you pretty well whether or not you have a weapon. Also letting friends and family know where you are, having a designated meeting place in case of emergency, and keeping a small stash of food and water will prevent you from waiting in line at the local store and becoming zombie bait.

Keeping yourself and your survival group safe is top priority for any group leader. That is why when you find a suitable location to settle down in, you fortify your defenses as soon as possible. That means making sure that whatever is lurking outside can’t find its way inside. Make sure all doors and windows are properly secured and locked. There should be no give to anything that you are relying on. Then, place heavy objects in front of doors and windows as a fail safe. Blocking windows with heavy items also keeps you out of sight, which is only a good thing. Just like in Plants vs Zombies, if any of your defenses are breached, it could mean certain doom. Secure the perimeter as quickly as possible and repair the defenses. Learn from your mistakes and make it twice as hard to break. This will ensure that you can sleep safely at night; a solid plant-based defense is a zombie’s worst nightmare.

I told you to shut up.

Back in World War 2, the popular saying of the time was “loose lips sink ships”. Now, that doesn’t directly apply to this situation, but in this case, loose lips are going to attract every zombie within earshot and make you the next soup-du-jour. Communication is key, especially when zombies are on the loose, but for God’s sake, do it quietly. Stealth is one of your biggest advantages against the undead, and frankly, screaming out that you are scared is just going to make you look stupid. Be smart and communicate silently. Ever wonder why Everett made it as long as he did? He was quiet. Take his advise and do the same!

Spiked bat? Sounds good to me.

Yes, guns are extremely effective at knocking out the undead; however, there are several disadvantages to using firearms for long term protection. First, they are quite loud, and that violates the lesson learned from The Walking Dead. Second, and most importantly, ammunition is limited. Even if you manage to save a million rounds of ammo, that is going to run out eventually. If a situation arises and you have to leave in a hurry, you won’t be able to carry everything from place to place. That is why you need a solid melee weapon. Try to stick with something metal, and stay away from baseball bats. Sure, they are good initially, but if a thrown baseball can break the bat in half, a zombie’s head will do the same. Knives and swords are easy to sharpen and repair, which makes them solid primary weapons. Take a lesson from the survivors from Banoi and make hand-to-hand combat a priority. Most of the first game was spent bashing zombies, and in a real zombie apocalypse, you’ll have access to much of the same weaponry as the Dead Island crew did.

Being resourceful could mean the difference between eating for a month or eating for a week. It could also mean being able to hold off a horde or being eaten for lunch. That is why it is important to use your surroundings to your advantage. Why waste a bullet or expend the energy to hack a limb when you can just run away? Why not pull down a shelving unit on a small group of zombies or set off a car alarm to distract the horde while you slip away? Be like Chris Redfield and shoot a generator to make it overload. Okay, maybe that won’t do the trick, but you get the idea. Work smarter, not harder.