With all of the announcements, statements, and retractions coming out of the big three in the afterglow of E3, everyone seems to be overlooking a rather big piece of gaming news: the release of the Ouya. The fledgling console started as a Kickstarter campaign, marketing itself as a revolutionary, indie-centric experience and was ultimately overfunded to a record $8.5 million. With its humble roots, open development platform, and $99 price tag, the Ouya quickly came to be known as the little console that could. Now that it’s out on store shelves, the question is: can it? 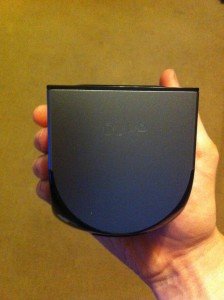 It’s clear that a lot of design work went into the Ouya’s looks. Little more than a fist-sized aluminum and plastic cube, it emits an air of sophistication and the futuristic, and will certainly be a beautiful addition to your entertainment system, no matter the style. At the same time, the Ouya doesn’t beg the attention of everyone who enters the living room. It knows it’s a sharp piece of technology and seems content to sit in obscurity behind the TV, if that’s where you put it. Unfortunately, you probably will want to stash it away in some long-forgotten hiding place, because good looks are about where the console’s high points run out. As the old adage goes, “It’s what’s on the inside that matters.”

The Ouya sports an nVIDIA Tegra 3 processor, 1GB of RAM, and an 8GB hard drive. For those of you who aren’t up on your technical jargon, what this means is that if you have a smartphone that was released in the last two or three years, you’ve likely already got a more powerful gaming machine in your pocket. What’s baffling about this is the fact that the Ouya folks had more than enough support to implement a more powerful processor and an increased memory capacity, yet chose not to. It’s nice that they kept the price tag under $100 to serve the crowd that can’t afford the AAA gaming experience, but there has to be a middle ground

between the $499 supercomputer and technology that is already outdated.

The controller isn’t much better than the console itself.  It’s modeled off the Xbox 360 controller and looks good, if a little obtuse, but does not function anywhere near as well. The heft feels just a little too cheap, like a higher-end Madcatz peripheral, while the triggers squeak with every press and the directional pad feels awkward enough to avoid entirely. The controller’s biggest fault, however, isn’t the way it feels or the noises it makes; it’s the lag. You can be confident that the on-screen action will always be a quarter-second or so behind whatever you’re doing with your thumbs.  Depending on the title, the delay can become anything from a minor nuisance to a game breaker. Either way, it’s an issue that should have been worked out in development. But enough about hardware. What actually happens when you plug the system in?

The Ouya’s user interface works well for the most part, though it can feel a bit clunky at times.After performing the initial setup and updates, the home page is attractive in its simplicity.  Here you have your standard “Play”, “Discover”, and “System management” menus, as well as an option for developers called “Make”. The first three work about as well as can be expected, but they won’t be winning any design awards. Things can seem a little cluttered at times, especially if you want to explore beyond the store’s suggested titles, but you probably won’t get the impression that you’ve gotten lost. 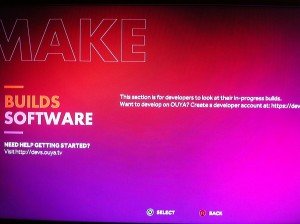 A tad confusing, though, is that fourth UI option, “Make”, which allows developers to access their builds and other resources from the console itself. It’s a useful tool, without a doubt, but it has no business being on the home screen.It almost implies that the Ouya folks expect most of their customers to be developers. Sure, the console prides itself on an open and transparent platform, but it isn’t so open that just anyone can jump on and create a game from scratch without leaving their couch. This is an option, then, that will fall completely by the wayside for most people. Or at least it would, if not for the fact that it’s where the web browser is discreetly tucked away, almost as if it thinks it’s too good for the rest of your applications.

Speaking of applications, what can you expect from the games you’ll actually be playing on the Ouya? Not much, unfortunately.

With its focus on independent selections, the system hopes to attract a large family of developers who don’t have the assets to find a home with the big names, and so far, it has succeeded spectacularly. The Ouya launched with a library of well over 100 titles, the largest of any dedicated console to date. Unfortunately, the name of the game appears to be shovelware. The vast majority of titles have already been released on mobile devices, and the few exclusives are, for the most part, objectively terrible.

There are, of course, exceptions to the rule. TowerFall is an Ouya exclusive gem, and a handful of ports such as Rush Bros. are

really enjoyable. But these are merely needles in a haystack, and sadly don’t reflect the quality of the library as a whole.  Ironically, the most successful titles in the store are ports of games that have already received wide acclaim on other platforms, including the likes of Final Fantasy III and Ravensword. The one area in which the console’s games really shine is local party play. There’s nothing quite like having all your friends over for some beer and video games, and because the Ouya isn’t a particularly powerful machine, it looks like the games created with this in mind will be the ones that ultimately succeed.

Far and away the Ouya’s most interesting feature, however, is its embracing of emulators. There are a plethora of emulators, from the Atari 2600 to the original Playstation and everything in between, readily available in the marketplace. A few of them, like EMUya, allow you to download games within the application for a nominal fee, all of which goes to their original developers. The vast majority, however, require you to download the games to a flash drive and plug it into the system, though even this takes only a few minutes. 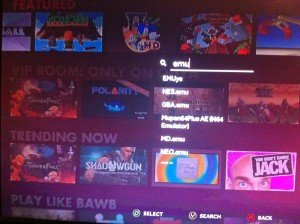 On one hand, having access to thousands of games that would be otherwise unavailable makes emulators the Ouya’s biggest selling point.  On the other, this feature is sure to raise some eyebrows in the legal realm. Of course the Ouya folks don’t promote videogame piracy, but they make it so easy that they may just as well be doing exactly that. At best, the emulators can be a great boon to the gaming community that support the hard work of the people who make the whole operation possible. At worst, they can be the makings of a litigious circus that the Ouya almost certainly cannot afford.

Reading this review, you probably think that the Ouya has already sealed its fate as a one-off gimmick that will be remembered as another Virtual Boy. That very well may be the case, but it doesn’t have to be. The console has a lot of potential that it simply hasn’t capitalized on yet.

As a video game system, the Ouya will be defined solely by the games it brings to the table. Though it’s in direct opposition to the console’s indie mission, quality control is a must. That’s not to say that every title should have to go through a rigorous series of tests to gain approval, but without taking steps to ensure that the available selections are at least fun to play, the system’s creators are setting themselves up for failure.

The hardware also needs to be redesigned. While it gets the job done, it doesn’t wow. The controllers will benefit from cutting down on the noticeable lag, and the console’s guts already need a major upgrade.

Some will say that the Ouya aims to be an affordable alternative to the big three, that it doesn’t need to compete with any other

platforms, so it doesn’t actually need to undergo any more development. That may be true for the moment, but come the release of the GameStick in August, there will be competition. Google is also in the process of developing an Android-based console, and if the Ouya doesn’t have a massive head start by the time it hits store shelves, it’ll be game over. Google and GameStick have both certainly been keeping tabs on what the Ouya has been doing wrong, and you better believe they’ll use those weaknesses to their advantage.

So should you buy an Ouya? Right now, it looks like the answer is no. You should, however, keep an eye on it. It has all the makings of a great system; it’s just a matter of putting all the pieces together. The folks behind the console have definitely been watching the critical reception of their work, and you can bet that sooner or later they’ll take the advice to heart. The Ouya will eventually be worth buying, you just have to be ready to snatch it up when that time comes.