A lot of people were disappointed in Diablo 3 and its end game progression system. It’s been nearly a year since its release, and unlike its predecessor Diablo 2, not many people are still playing it. In fact, it’s rather likely that more people play 2 than 3, even though the former is around 13 years old. Thankfully, Grinding Gear Games comes to save the day with free-to-play action-RPG dungeon crawler Path of Exile. Sometimes there just aren’t enough adjectives for video game genres.

Grinding Gear Games consists of a small group of ARPG fans who got tired of the stagnant market and decided to make their own game. PoE spent 3 years in secluded development before being announced in 2010. A few months later, the project entered into its first phase of closed beta. Since then, the game has been iterated, balanced, tested, and finally opened to the public for play. Even in its infant stages, PoE has a large, dedicated fan base investing thousands of hours a week.

Path of Exile is set in a dark, hyper-violent fantasy world where survival is nearly impossible. Your character finds themselves washed up on the shores of Wraeclast, a remote continent reserved for criminals and outcasts. In order to survive, you must kill, or be killed by, the harsh environment and its native inhabitants. The game’s quests are fully voiced and guide you through a scripted adventure as you trek across the vast and dangerous landscape. All this is done with exceptional quality that enhances the atmosphere.

The game plays much as you would expect from the genre. The camera offers a fixed isometric view, along with a functional, if not completely unspectacular, mini-map  You move your characterby clicking the ground, sending them in a direct line to your mouse cursor. The auto-pathing is a bit wonky—if not entirely non-existent—and rarely ever does it independently resolve an obstacle. There are times where this can be advantageous, yet it could use a bit of improvement. Abilities work in much the same way, with projectiles flying towards your mouse cursor. A lot of ranged attacks can be dodged depending on their speed, which makes combat feel less laborious and more enjoyable. You’re going to need a modicum of twitch skill and reflexes in later areas where encounters are extremely volatile. 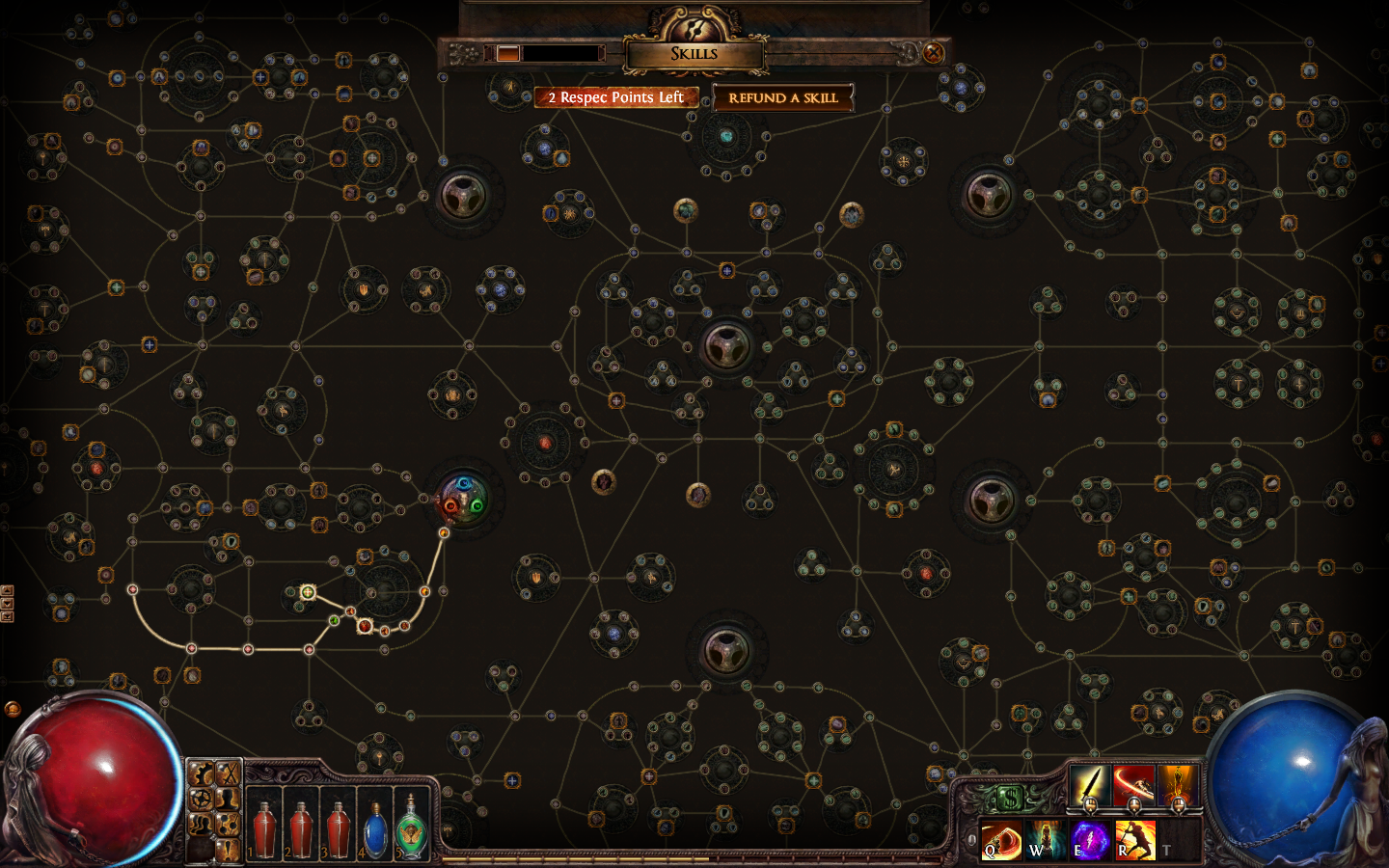 The big feature that separates PoE from other ARPGs is its competitive leveling leagues and PvP systems. The game currently features standard and hardcore leagues. Standard is the basic gamewith respawns, while hardcore gives you one life to live. Each league has its own ladder system, which ranks players based on level and time spent. In the future, Grinding Gear Games intends to create leagues with specific goals that unlock account wide rewards to the victor. There’s also a PvP league in the works in which each area of the game is shared by all players, and upon death you drop all your equipped and inventoried possessions.

Another seemingly unique feature is the class and skill gem system. Each of the six classes use two of the three major stat pools. For instance, the Shadow class splits between dexterity and intellect, while the Templar uses strength and intellect. This all culminates in the passive skill web, the size and scope of which can’t even fit on a single screen in-game. Each level awards a point that you can allocate in this tree, passively buffing your character and allowing you to further customize your play style.

Speaking of play style, PoE offers a unique system in which Gems provide you your abilities, and they level up with your character as long as you have them equipped. Each Gem is socketed into a corresponding color slot in your equipment. Some sockets are linked, meaning the Gems in these slots can benefit each other. Some are support only, meaning they do nothing more than augment the ability Gem they’re linked with. All Gems can be equipped by all classes, so long as they meet the stat requirements. Gems are acquired from quests, random drops, and through player trading. Just one more time, say it with me one more time, with feeling…Gem.

There are lots of ways to mod out gear in order to have the proper sockets and links you need. Instead of the economy of the game being currency based, each time you sell to a vendor, you’re awarded components to create gear mod items. These items range from a mod that changes a socket’s color to a mod that upgrades an ordinary item to a magical one. Without a currency, you’ll find most people using these mods as bartering tokens, along with Gems and high-end gear. 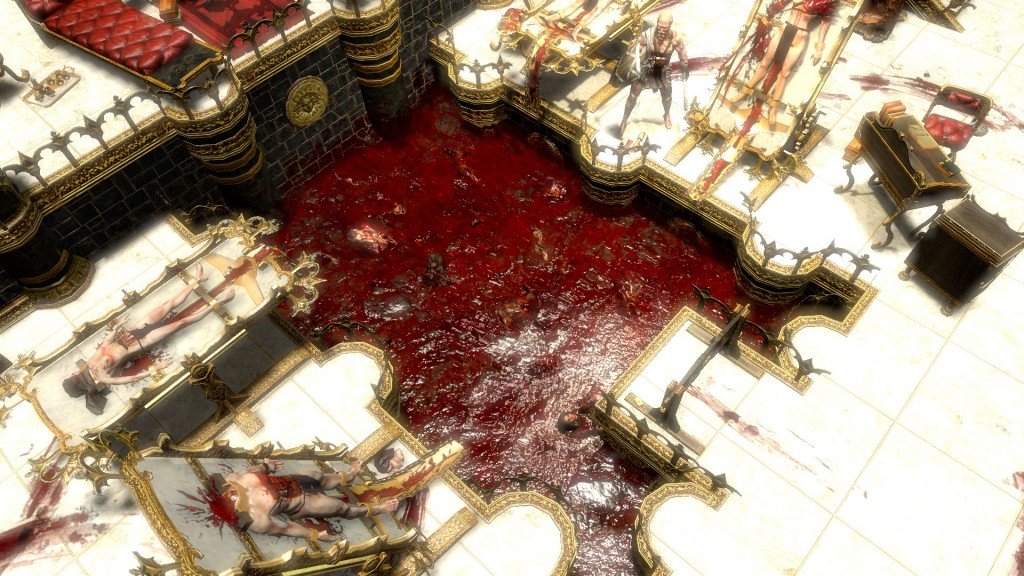 Unlike most of its contemporaries, Path of Exile has a dark, brutal, and foreboding art style reminiscent of Diablo and Diablo 2. Most of the environments are dark and dank, with very few bright areas. Grinding Gear Games definitely wanted to take a much grittier look compared to Diablo 3 and the Torchlight series. PoE‘s atmosphere is definitively grim and dire, which may be what hardcore fans of the genre are looking for.

There are still some things left a mystery when it comes to the game’s micro-transaction model. There isn’t a lot available in the store at the moment, and who knows what could show up in the future. Right now, though, Path of Exile might be the last great bastion for ARPG players. It has the widest array of features on the market today, and if you’re looking for a good dungeon crawler, there’s no real reason not to give it a shot. You have nothing to lose, other than maybe your mind.

This review is based on a retail copy of the PC version of Path of Exile developed by Grinding Gear Games.