Ys: The Oath in Felghana might look like a JRPG, but at a nice, low price point it’s actually one of the best purchases a budget-minded hack-and-slash fan could probably make. It’s a translation of a port of a remake of a remake of the third entry in the Ys series, an action RPG series that never quite hit it off in the States the way Final Fantasy or Dragon Quest did. 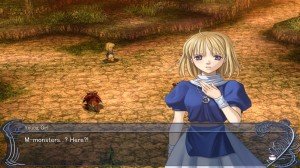 Ys III: Wanderers from Ys was often considered the black sheep or Zelda II of the series, but it was all over every 32-bit console you remember and many you probably don’t. It’s got a lot of traditional JRPG elements, particularly in terms of graphics and storyline, but there are a lot of atypical elements in here as well, like the battle system.

Ys: The Oath in Felghana is the English version of a previously Japanese-only PC and PSP remake of Ys III. Though Ys III was a cult-classic sidescrolling RPG back in the days of the SNES and the Genesis, the remake almost completely ditches everything but the basic storyline and world. The difference is night and day; while Ys III was a good but slightly sluggish Castlevania-style title, Ys: The Oath in Felghana is a snappy top-down hack-and-slash game based around speed and style. Overall, it’s an incredible improvement.

Ys: The Oath in Felghana picks up after the events of Ys I and II, but there’s little connection and nearly everything is laid out for you at the start of the game. You are Adol Christin, a red-haired knight travelling with his best pal Dogi to Felghana, Dogi’s homeland. But, surprise surprise, monsters have begun to appear in the wilderness for the first time in hundreds of years, and the town itself is being harassed by a corrupt duke from a giant empire. Since Adol is nothing if not a good sport, he decides to help the town with all of its problems, embarking on an adventure full of dungeons, monsters and mystical power.

The neat thing about Ys: The Oath in Felghana is that it tries to play around with the massively overdone tropes of the traditional JRPG. On one hand you have plenty of JRPG stereotypes, like the silent and noble protagonist, the doe-eyed damsel 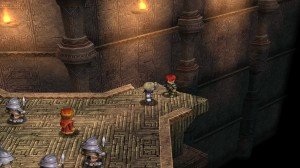 in distress who can only open up to the hero, the corrupt and repressive overlord, rumblings of a dark evil sealed away for centuries, and probably half a dozen others. But the game also does quite a few things differently. First of all, the entire adventure is set in Felghana and the surrounding countryside, and you never visit more than half a dozen locations. Unlike adventures where the entire flipping world is at stake and the towns are just shops and inns between random encounters, Ys: The Oath in Felghana makes every single character unique. They’ve all got character portraits, backstories and personality quirks, and they all slowly change and react to you and the world as the adventure continues. It’s rare to see any RPG avoid the trap of including random, generic NPCs, and it gives the game a storyline that is smaller and more intimate in scope.

Another great subversion of traditional JRPG elements is the plot itself. Sure, you’ll be sent after the four mighty ancient MacGuffin artifacts, but the game isn’t structured around it. Unlike a series such as Zelda, there isn’t one dungeon per artifact, and plenty of dungeons give you reasons to explore them beyond simply asking you to get the plot artifact from the boss. There are plenty of twists and turns in the narrative over the course of the game, some we guessed well ahead of time while others took us by surprise. The mix of the familiar and the surprising helped to keep us engaged, and even when it became clear how the game was going to finish, by the final dungeon we still felt completely wrapped up in seeing it through to the end.

The story is great, but does the gameplay hold up as well? We’re happy to say that it certainly does. Adol’s dungeon-crawling adventures 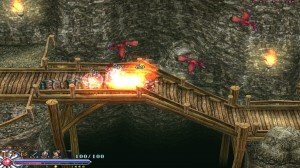 involve fighting hordes of enemies from room to room, with the occasional puzzle or platforming segment in between. Combat is quite fast and has an upbeat tempo; Adol has just one basic attack but it can be chained together in many ways. For example, holding the attack key will launch the enemy into the air; jumping and tapping the attack key will allow Adol to hover above the ground and repeatedly attack his target in mid-air; and holding it down will send him to the ground to crit and stun anyone beneath him. Adol also sports a couple of magic-granting pieces of jewellery that let him launch fireballs or other such magical attacks which can be seamlessly worked into combos for more experience and boost – a special meter that ups his attack speed. The combat is very easy to pick up, but the wide variety of enemies and environments ensures that you need to adopt many different strategies to avoid damage and efficiently fight off the monsters. It’s very quick and very reflexive, and manages to feel more fast-paced than many other hack-and-slash titles. Higher difficulties tend to dimish this feeling as the enemies gain more and more health, but Adol’s overall mobility remain a nice break from the traditional isometric Diablo-style action RPG.

The game also removes much of the complexity of item management. There are only a handful of consumables in the game, neither of which can heal you during a battle, and just six sets of gear. Each set is upgradeble in the town forge, but they follow a linear progression and there’s no reason to keep an older gear set over a new one. It’s a bit too simplisitic for an RPG, and the game missed a real opportunity to 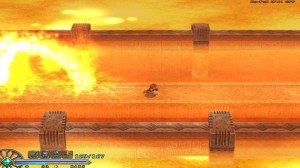 allow you to pick and choose your set based on your playstyle. Instead of just increasing defence, perks like faster magic regeneration or slower but more damaging attacks could have added some much-needed variety. Instead, the variety comes from a slew of ability-granting items that add things like dashing, double-jumps, and the ability to survive lava. This adds a bit of a Zelda or Metroidvania feel to the title, encouraging backtracking to reach new treasures, which is assisted by the excellent teleportation system that keeps travelling the countryside from being a chore, like it is in many JRPGs.

In terms of presentation, the artwork is crisp and well-designed. The characters themselves can look a little fuzzy and out of place due to being sprite-based 3D models, but the environments are stunning and varied. Aside from the aforementioned sprites, the character portraits themselves are highly detailed and the game often uses great-looking, large-scale character art to underscore particularly important scenes and characters. As for the soundtrack, it mostly consists of almost orchestral power metal. That may seem like it would be hilariously out of place, but it works almost perfectly in riling you up for the hacking and slashing.

The game itself is fairly short for an RPG, ranging between five and ten hours depending on your difficulty setting, skill, and commitment to the handful of optional side quests. However, the game features newly added Steam achievements, six difficulties – of which, three need to be unlocked in sequence – and a boss rush mode. 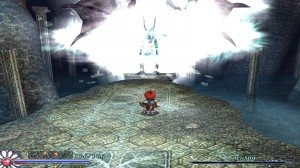 While it’s nice to encourage replayability, the lack of variety and character choice will probably hinder your will to play through the game three times to unlock Inferno mode and then once more to unlock Boss Rush. If you really like the combat you might be inspired to play through it a few times, but it’s a bit of an overly steep and time-consuming curve to unlock the goodies, and the story isn’t as much fun on a second time through, so we can’t imagine the charm holding up for a fourth run.

If you like the sensibilties and styles of JRPGs but you want something faster-paced and more hands-on, Ys: The Oath in Felghana is a fantastic choice. It’s fast, looks great, and the enhanced features of the remake clean things up into a great experience. It seems that Steam is the perfect platform for niche games with cult appeal like this to find a wider audience, so we hope XSEED will keep it up with more releases of Ys and other cult classics.

This review is based on a review copy of the Steam version of Ys: The Oath in Felghana, provided by XSEED Games.