If we told you Trine was a side-scrolling puzzle platformer, you’d probably think, ‘Wow, another one’.  It feels like there is a new side-scrolling downloadable game every week, but rest assured, Trine is able to stand out as one of the best on the market today.

Trine was developed by Finnish company Frozenbyte, known for their earlier work Shadow Grounds. This time they take you to a fantasy realm where with the death of the king, an army of undead have risen to conquer the lands.  Three unlikely heroes team up to fight this evil: a quiet Thief, a cowardly and womanizing Wizard, and a fat and dim-witted Knight.  There is a charming aspect to the three characters and you’ll quickly find yourself becoming attached to at least one of them.  The voice work is good and their simplistic banter is entertaining as you pass through the levels. 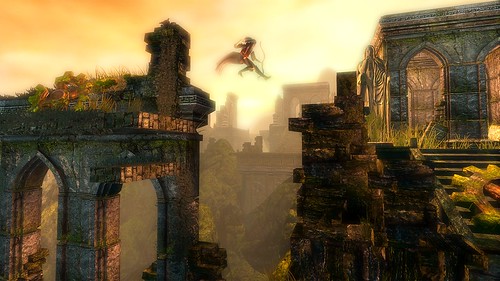 Each character has their own abilities that must be utilized to succeed.  The Thief can fire arrows and has a grappling hook to breeze through most situations.  The Wizard can materialize blocks and planks out of thin air, as well as move objects with his magic.  The Knight is the fighter who will take on most of the undead you come up against, but he can also throw objects, which is more helpful than you originally think.  There are even experience points to gain and new abilities to unlock, which adds to the overall gameplay experience.

Yes, the gameplay is technically a side-scrolling puzzle platformer, but Trine is so much more than that.  The beauty of this game comes in the physics engine used from Nvidia, called PhysX.  Everything moves with an amazing feel of gravity and weight, and throughout the game you’ll have to factor real-world physics into the equation as you pass through the levels.  Even stacking blocks to reach a high ledge has to be done right, otherwise the blocks will tip over.  You need to achieve the correct balance for any planks you put down over gaps or they may slide away due to gravity.  It’s amazing how well this system works, and you will quickly use it to your advantage to get past those tricky areas. 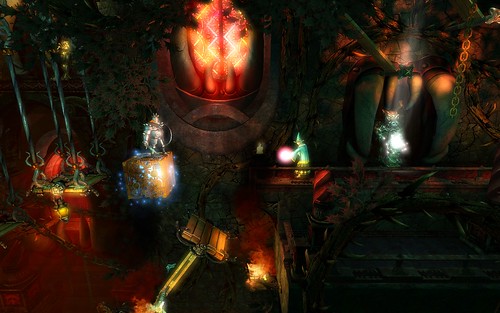 You can play this game alone or with up to two friends, and we really, really recommend you do the latter, as we don’t think we’ve ever had as much fun with any other co-op game.  Playing Trine with friends is an absolute riot.  When playing alone we never got stuck – we would simply switch character and move on.  But when playing with friends, where you can’t switch characters, we got stuck about two minutes into the first level.  It was just a high ledge: the Thief casually rapelled up with her grappling hook, but the Wizard and Knight can’t do that.  It’s very simple problems like this that end up being the hardest, and often you’ll be yelling at the Knight since he’s too cumbersome to overcome the most simplistic of obstacles without help. But it’s this teamwork that makes the game.

The next amazing thing about this game is how there are multiple solutions for each problem.  Our team of three players reached a large gap that would take multiple blocks and planks to cross, along with some very skilled jumping.  Instead, we had the Thief and Wizard hop up on a block, then the Knight picked up the block and threw it across the gap.  It worked perfectly.  How did the Knight get across? He stood on a block which the Wizard levitated across. Is this the proper way to play or is this cheating?  We have no idea, but that’s the beauty of the game – you can play it how you want. The gameplay is enough of a reason to get this game, but the absolutely beautiful set designs are an incredible bonus.  Trine is a work of art.  The medieval, fairytale, fantasy feel comes alive so much in the environments that we would often stop to admire them, as the amazing color schemes and deep backgrounds are marvelous.  The majestic forests seem to radiate magic, and the dark forests are as scary as they are dangerous.  Throw in the simple but perfect music and you have one of the most stunning downloadable games ever seen.

It is not without its flaws, however.  Any level where there is too much fire, the game’s frame rate can’t handle it and you get that offline lag feeling.  As stated before, playing alone really isn’t the way to go with this game, although there is only local co-op.  That means you can’t play online with friends, and we find it strange they didn’t incorporate this into the game.  The screen focuses on one character, often making it difficult for the other two players to see where they are.  Also, there is little replay value in a puzzle game.

Even with its flaws, Trine is one of the best side-scrolling games on PSN to date.  It’s almost impossible to describe how breathtaking the backdrops are, and the simple but loveable characters are endearing. Then add in the remarkable physics and you have an amazing game on your hands.  The fifteen levels will take about 5-6 hours but there are collectables and trophies, so completionists will love this game as well.  Our only suggestion is to grab two friends to play with, as it’s what makes the game – we promise that it will be one of the most memorable experiences you’ll have in a while.

Final Verdict: Definitely pick this up, as the game is well worth the $10 price.  The game is beautiful to look at, unique in style, and most importantly, fun to play.  We give it an eight out of ten.

This review is based on a retail copy of the PlayStation 3 version of Trine by Frozenbyte.