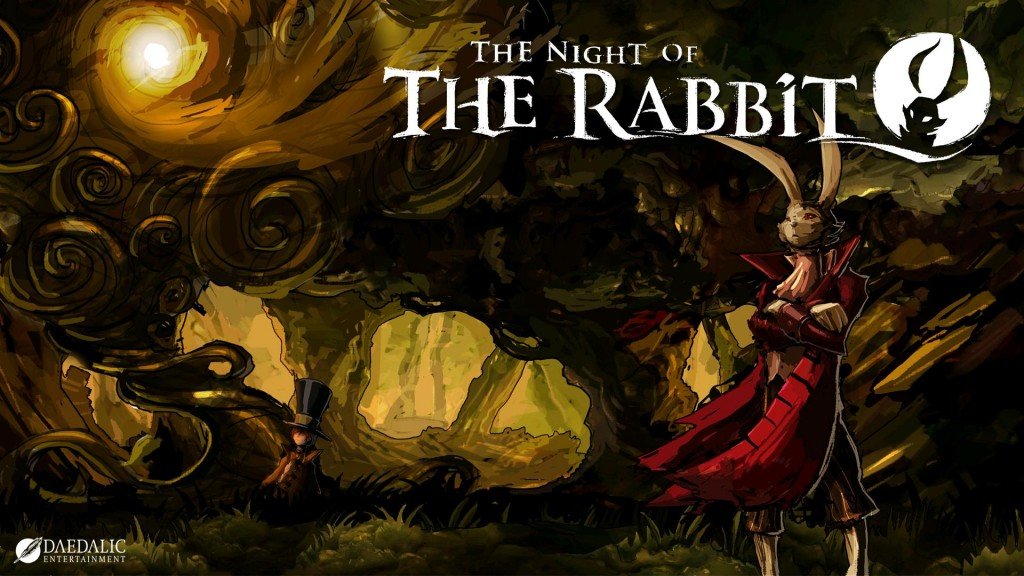 Maybe it’s because I haven’t played a point-and-click puzzle/adventure game since childhood. Maybe that’s why The Night of the Rabbit’s child-like tone is putting me in the right frame of mind, bringing back memories of clicking away at cartoony graphics on my parents’ Windows 95 PC with a giant CRT monitor. I’m trying to put a finger on exactly why, but somehow I’m really getting sucked into this game.

Let me back up. If this sounds like I’m gushing, then let me categorically state that this sort of game is not for everyone, and that’s okay. But if you have fond memories of the old LucasArts stalwarts like Maniac Mansion, Monkey Island, and Day of the Tentacle – especially if you’ve played nothing of the sort since the 1990s – then here is a spiritual descendant of theirs that’s worth a look.

The player follows the adventure of 12-year-old Jeremiah Hazelnut – I challenge anyone to come up with a more British children’s book name – who lives in bright, fun, forestry, pastoral paradise at the edge of gray, boring modern town. He wants nothing more than to seize the day for his last 48 hours of summer vacation, and considers himself an aspiring magician who appreciates the trickery of illusion, but also the childlike idea that there might be mysterious forces behind what meets the eye. It would seem his dreams come true when a letter flies out of nowhere into his mailbox with instructions for some sort of magic ritual.

Game mechanics are as simple as they come. Click around on a picture to find stuff to interact with, pick up, combine, or talk to. The challenges in the game are puzzles, but not really the Professor Layton type – you’re usually just figuring out what item(s) in your inventory can resolve some problem you’re faced with. If that sounds simple; well… it can be tear-your-hair-out challenging and you will definitely have to fight temptation just to look up the solution in a guide. 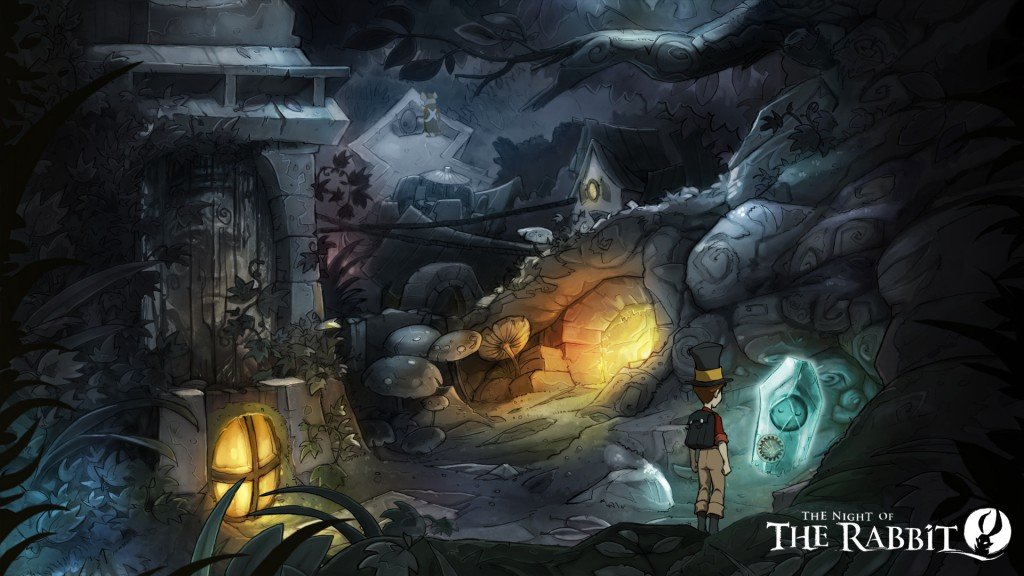 There is always some manner of logic to the right solution, but sometimes I found myself just trying to use every item in my bag on every clickable object. Getting stuck is just part of the game in these sorts of games. The exhaustive try-everything-with-everything approach isn’t really feasible, since you’ll be carrying up to a couple dozen items and there’s stuff around everywhere, but usually I was able to narrow it down somehow. Other times, I really did just luck into the solution at random and was presented with a “That makes sense, but I never would have guessed that” moment of revelation. I don’t want to spoiler challenges by citing examples, because I really do get a sense of fist-pumping satisfaction when I figure out something difficult.

With their static camera angle, 2D graphics, slow pace, and little violence or action, there’s demand on a point-and-click adventure to nonetheless look good visually; the player is going to spend a lot of time staring at the environments on the screen, so the environments better look good. I’m happy to report that the lusciously rich, cartoony artwork makes up for meager animation. I’m not really decided on whether or not I should be critical of the animation. This isn’t Halo. It’s not the kind of game that demands superb, fluid rendering of detailed 3D objects in motion. Obviously the developers’ efforts are spent elsewhere. And the art is gorgeously imaginative and rendered like a picture book. The bright, round windows, plump chairs and teapots, anthropomorphic animal characters, gadgets that never quite manage perfect circles or right angles – everything looks like the work of Roald Dahl by way of Miyazaki Hayao, with an accent of quirky Harry Potter magic. There’s even a little bit of an acknowledging wink and nod to the latter in the form of an in-game book title. 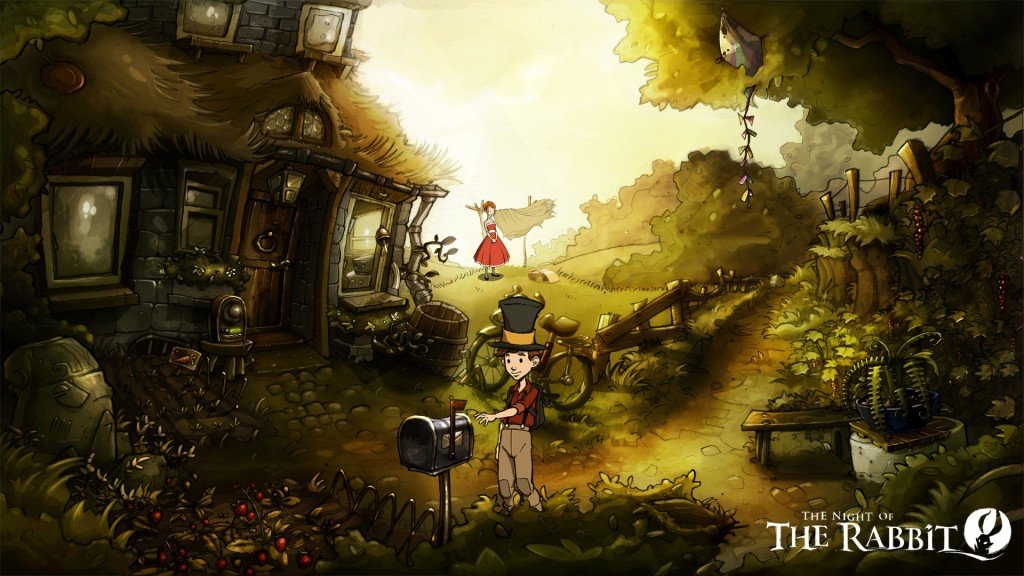 The storyline takes a bit of time to ramp up, but there were sections in which I definitely felt compelled to solve a puzzle as much for plot resolution as winning a game. Dialogue is usually voice-acted well, and sometimes the thinking-out-loud observations of the protagonist have a distinct Threepwoodian tone, a touch that reaches some nostalgic pleasure center in my brain. They also throw in occasional self-deprecating gags about the silliness of forcing game mechanics on a situations in which the logical protest is “That kid is half your size! Just shove him out of your way!” However, sometimes conversations that fell a bit flat on humor would drag on to let’s-get-on-with-it lengths, and sometimes the voicework didn’t seem to match the activity. If Jerry’s chasing someone he wants to apprehend and says “Stop!” I want him to speak up a bit.

Otherwise, I have to praise the attention to detail here. Jerry moseys about at an unhurried pace, but you can double-click an exit area to just move to the next scene. This shortcut is especially appreciated when you’re backtracking or trying to re-examine previously covered territory. Now, one of the most frustrating ways to get stuck in a point-and-click adventure is to miss something very small that you were supposed to notice. The Night of the Rabbit includes a sort of magic eye that highlights everything that you can interact with. It is debatable as to whether or not that’s cheating. However, if you consider that some scenes have so many highlighted objects that I still missed stuff at first glance, it may not be cheating after all. 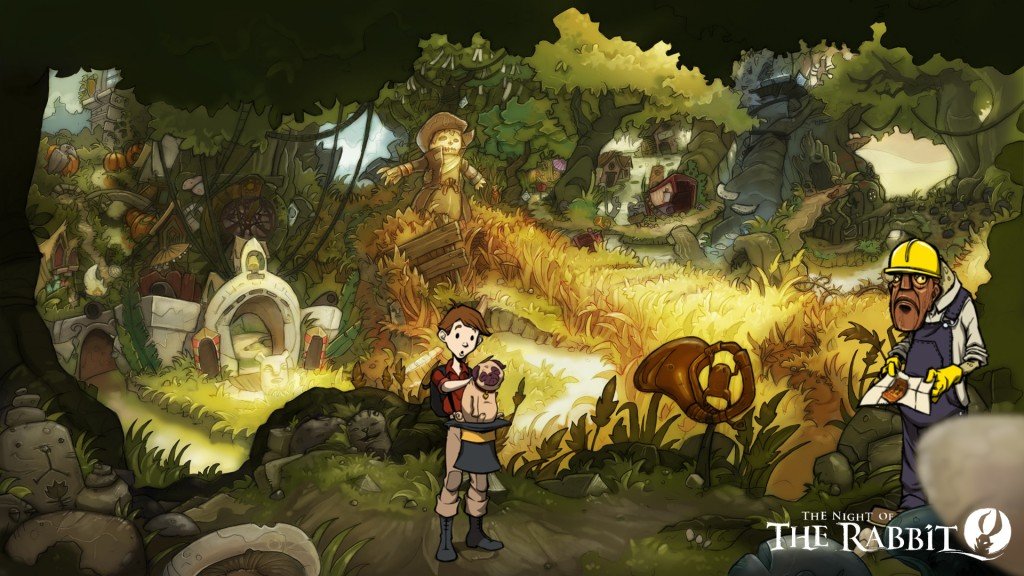 I don’t think it shortcuts the game much at all, especially since most of the challenges were pretty tough for me anyway. I guess the game isn’t super long, and if you’re a whiz (or know all the answers already), you could burn through it in maybe 3 or 4 hours. Man, it took me much, much longer, though. I didn’t leave the game feeling very smart at all, but I did get the sort of rush of satisfaction when the puzzle pieces click into place. There’s also some worthwhile scavenger hunt challenges that, while aren’t essential to the game, provide a modicum of replay value after you’ve completed your first run of the story.

I also want to highlight the soundtrack. I was hooked from the opening menu. The forlorn viola reminded me of the theme for Rohan in Lord of the Rings, and I immediately turned it up. Some of the darker moments in the story are well served and expanded by creepy-crawly strings or some kind of minimal-melody undertone. I think it’s hard for this sort of game to be super immersive the way something like an FPS can be, but the soundtrack goes a long way toward that end.

If you loved the point-and-click adventures of yesteryear, then The Night of the Rabbit has something for you, but it also has something for whoever loved animated children’s movies and stories from the 70s, 80s, and 90s. If you’re at the intersection and think you would still enjoy both now, then look no further than The Night of the Rabbit. If I had a kid, I might play this game with him or her the way I might read The Fantastic Mr. Fox or watch The Secret of NIMH.

This review is based on a Steam review code of The Night of the Rabbit, developed and published by Daedalic Entertainment.

Rating:
8.5
Strengths
+Bright, Imaginative Art
+Nostalgia Factor
Faults
-Voice matching emotion
-Adventure Trail and Error
What would you say?
Average: 0 (0 votes)
Your vote has been submitted
Did you like this? Share it: