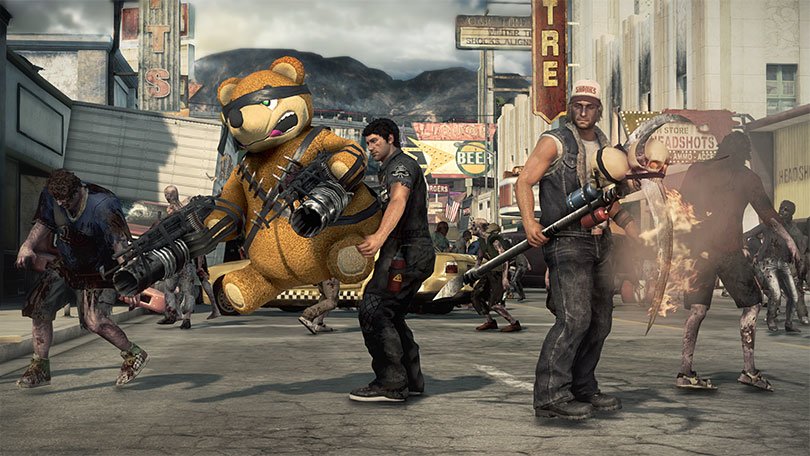 As the Xbox One and PlayStation 4 wrestle with their awkward infancy, gamers look for games that specifically showcase the newest technology, rather than merely apply a quasi-noticeable graphics upgrade to a game also out for the Xbox 360 and PlayStation 3. Xbox One owners, here is your game. It’s not perfect, but within minutes, you will see some solid evidence of what you paid for with your new console.

I find myself back in the same position I’ve been in since I started seeing gameplay video of the XB1 and PS4: the graphics in Dead Rising 3 are without a doubt some of the best I’ve ever seen in a video game, but they don’t leave the previous gen completely in the dust. Characters are rendered in impressive detail and faces are emotive and expressive, but I don’t think much more so than Halo 4, which also did a great job with those features. It’s hard for me to declare a new dawn of video game tech just by looking at graphics detail alone. 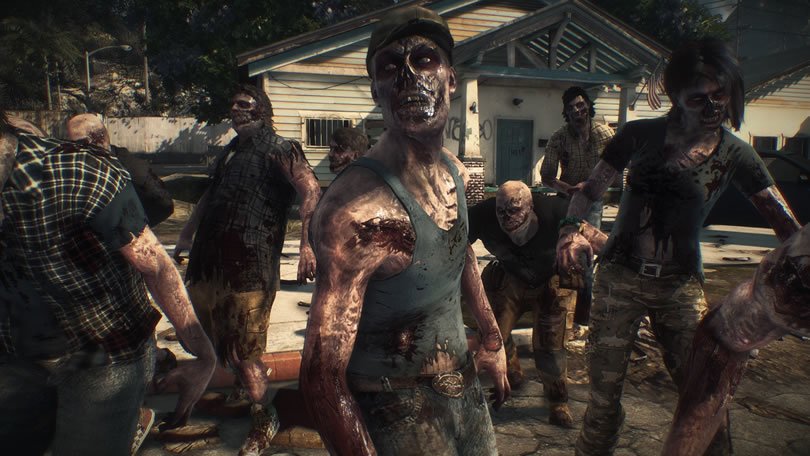 However, here’s what does blow the 360 away: the sheer number of moving bodies rendered onscreen and the draw distance at which individuals are visible, even in crowds. Man…it’s literally hundreds of zombies. Heretofore Dynasty Warriors games only wish they could have done this. When I found a high vantage point, I would sometimes find myself taking time to gaze out over the roiling undead masses the way I would stop and look out over the Gotham cityscape in Batman: Arkham City. If you’re looking for an example that demonstrates something of the latest in video game tech, the zombie hordes of Dead Rising 3 is a good one.

Handy Mechanic Nick Ramos is one of a small number of holdout survivors in a Los Angeles analogue overrun by tens of thousands of shambling, flesh-eating zombies. The authorities, embodied by the ominously named Federal Bureau of Zombie Defense and Control (the ZDC) have pulled out, warning survivors that the city will be flattened by bombs in less than a week. The objective before Nick and friends is simple: get out. The obstacles – completely walled and road-blocked perimeter and zombies in every direction – make the task a bit more complicated. I’m honestly not going to bother criticizing story much here. The story is fine, but this isn’t a game that really needs much story. They put one in because they had to, and it works. 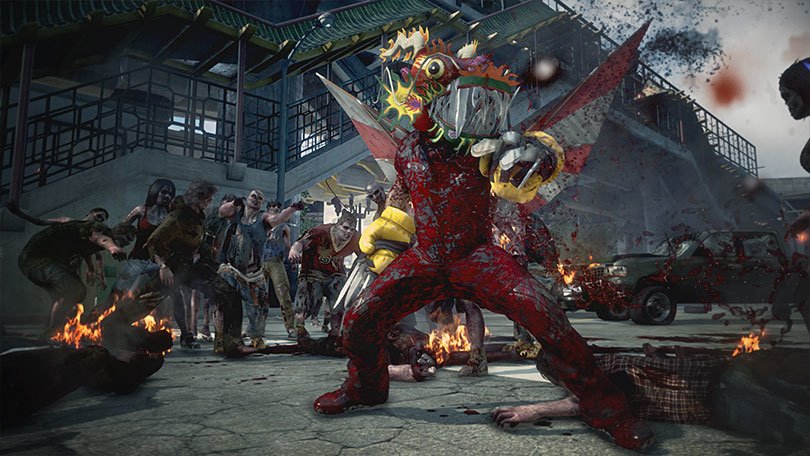 The game actually borrows a lot of pages from Arkham‘s venerable playbook. The playable space is enormous, a richly varied urban maze with side quests, collectibles, upgrades, and mini-challenges practically around every corner, down every alley, and up every playground slide. Like Arkham, the sheer density of stuff to get distracted by, multiplied by the sense of scale to the space, is daunting. I was gleefully lost in chasing down weapon plans and fellow survivors for hours without pursuing the campaign objectives at all. Make no mistake, you will need to use vehicles and travel highways in order to get around fast enough, especially when pursuing timed objectives.

Like previous Dead Rising games, the hook is that so much of the random debris that litters the environment is accessible and useful. If you’re unarmed, pick up that nearby crowbar and you’ll be able to beat your way through several dozen zombies. If you’re truly desperate, stuff like the old-fashioned brick fastball can get you out of a jam. Sometimes you’ll happen across more suitable force multipliers like swords or firearms, but the real jackpot is finding weapons that can be jerry-rigged together with devastating and often wacky results. 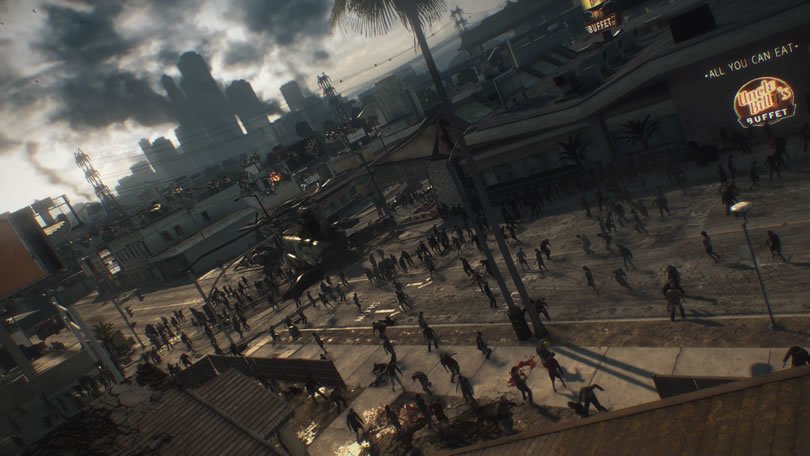 This weapon-MacGyvering is the core mechanic of the game. The limiting factor on weapons is a finite amount of use before they break down and are automatically dropped by Nick. A broadsword would seem like the perfect weapon for a zombie apocalypse, but try to hack your way through too big of a crowd, and it will break in the middle of it. Hope you got a backup plan. However, combine that sword with a gas can, and the result is a balls-to-the-wall inferno chopper of zombie annihilation, a weapon with a wider sweep, more punch, and longer durability than it had before. Now you can take on crowds of over a hundred before it breaks. Charge into action with a few combo weapons in your inventory, and an entire crowded city block can be flattened one slaughtering melee swing at a time. You’re a one-man flesh grinder, sending severed, pulverized hunks of unfortunate zombies in every direction. You’ll start to wonder if “Zombie Apocalypse” actually means an apocalypse for the zombies.

Two weapons can only be combined together if you’ve discovered the schematic for that specific combination, and there are literally hundreds of them to find. Some are even upgrades of existing combinations. Wire a car battery onto a broken street light post and you got a giant cattle prod with an area-of-effect slam. Stick a gas can on it, and the thing can switch back and forth between electric and flame attacks. One of my favorites was to run around in full football equipment, chucking Nerf screamer footballs with blades stuck in them. There are throwing weapons, slashing weapons, sweeping weapons, firearms, bombs, blunt weapons, area-of-effect weapons, traps, gun turrets…I think this game has the most variety of destructive implements I’ve ever seen. Even vehicles can be combined into rolling murder, like a motorcycle with a steamroller for a front wheel and flamethrowers, because there is no God for zombies. If that’s not enough to convince you, just wait until you hit the streets with a horrifying combination street sweeper-ice cream truck known as The Party Slapper. 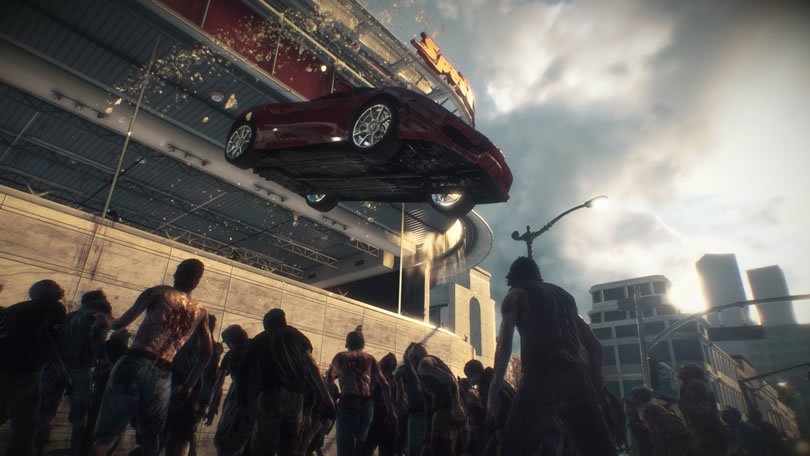 The weapon diversity actually also brings me to my biggest criticism of the game. Considering the ridiculous range of your arsenal, you aren’t really challenged to make use of specific weapons in clever ways. There are a few minor change-ups of enemy types – fireman zombies are a bit tougher and swing axes, football zombies are a bit tougher and tackle you to the ground – but you don’t see them very often and you can beat them by just hammering away a bit more than you would on regular zombies. As per usual with zombie stories, the most dangerous thing out there is hostile fellow humans. They shrug off more damage and have some ranged attacks, but even they can’t stand up to sustained flailing of your combo weapons. You don’t need to plan much for a combat scenario when you’re deciding what weapons to make or keep. In fact, the game will often leave obviously combo-able weapons or vehicles right in spots where there’s a solid chance they might come in handy.

I still had a blast with the combat, but it is almost always just a crowd control game, and a pretty easy one as long as you don’t let yourself get caught empty-handed. Much of the fun of the game is giggling “No way…” when you make something like chainsaw nunchucks, and then the ensuing glee as you wreak havoc on the nearest cluster of undead. I would have liked there to be more pressure to, for example, have to use my shockwave blaster to knock something over and then a specific piercing weapon to penetrate armor. There are a few minor glimpses of weapon-specific challenges, but well over half of those cases are boss fights and those exact weapons are usually lying at your feet.

Character customization is decently detailed, and experience points can be used to fine-tune Nick to your play style – although there just aren’t enough guns and vehicles to make those options reasonable when you’re going to need health and melee prowess much more. Cosmetically, there are scores of outfits, hairstyles, accessories, and beards to try. I went full football gear and never looked back, and cut scenes look hilarious like that. Personally, I never really care all that much about playing dress-up in video games, but it’s there if you want to.

With the Xbox One still fresh and available full-featured triple-A games still limited to very few new-gen-only options and a bunch of cross-platform fare, I say Dead Rising 3 is a must-own for fans of fast action. The generally low difficulty is forgivable (I never died in my first playthrough) with the core action so wildly fun, and gamers after a real challenge can always opt for Nightmare Mode. In fact, if they threw in a bit more challenges to your sense of engineering to go with all the build choices you get, Dead Rising 3 would be real close to a 10 out of 10 game.

Did you like this? Share it:
Fun in the Undead Sandbox | Dead Rising 3 Review
Positives
Negatives
8.5Overall Score
Reader Rating: (0 Votes)
0.0