Well… right, actually. All of those things do constitute what it is to be a gamer, but not everything it takes involves actually playing games. As gaming has grown in popularity across the globe, it has become a culture, a way of life. And just like films and music before it, gaming’s expansion has brought with it a buzzing memorabilia scene. From figures to statues, from soundtracks to art books, it’s all out there if you’re willing to dig deep into your pockets to take your love for your favorite franchises to the next level.

My name is Jamie, and I’m new here on New Gamer Nation. As a way of introducing myself to all of you lovely people, I’m going to be showing you some of my memorabilia collection, as well as giving a few opinions on my favorite gaming series along the way. So without further ado, let’s get started, shall we?

I bought these little beauties three or four years back when I was discovering the sheer awe-inspiring wonder of Square‘s masterpiece for the first time. The figures’ poses are wonderfully realized and really capture the playful sense of character and charming relationships that the game is rife with. A great way to remember what, in my mind, is the greatest RPG of all time.

The quality of the likenesses of these 5” figures really captured my eye, and the fact that the Sonic figurine is very much the Classic variant sweetened the deal even more so. Like many long-time Sonic fans out there, I much prefer his original 2D outings. Sonic may have gone a bit wayward during his transition to 3D, but without his like blazing the trail (quite literally in his case), the industry probably wouldn’t be where it is today, so we all owe a debt of gratitude to Sega‘s spiky mascot.

Although Lara has recently gone through a 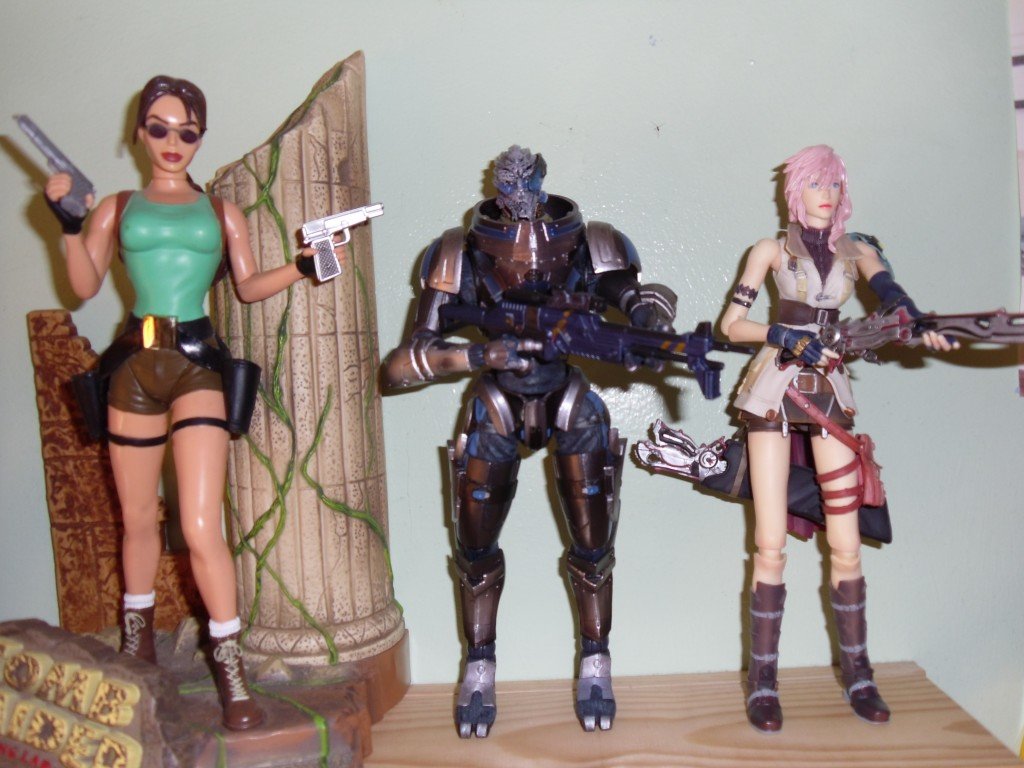 n image change to bring her more in line with the 21st century, there remains a certain wistful appeal for the traditional, impossibly curvy Ms. Croft, with her dual pistols and tiny shorts. The first Tomb Raider really helped to put PlayStation on the map, and Lara is an icon, pure and simple, so her place on my shelf was assured, especially looking as badass as she does in this particular statue.

Garrus the Turian is a Mass Effect veteran, appearing in all three games in the trilogy and never being anything less than achingly-cool whilst backing up his best bud Shepard. In a series packed full of varied characters, species, and crew members, Garrus stands head and shoulders above the rest…

“My name is Commander Shepard, and this Play Arts Kai Garrus is my favorite figure on the Citadel!”

Lightning is the edgy, pink-haired leader of the rag-tag band of misfits who star in Final Fantasy XIII. The 13th main entry in Square Enix’s long-running series is one of the more controversial, given that it’s pretty much a 50-hour corridor interspersed with some jaw-droppingly beautiful cut scenes and, of course, turn-based battles. I don’t really know why, but I absolutely adored it, to such an extent that I completed it twice; call me crazy if you must! 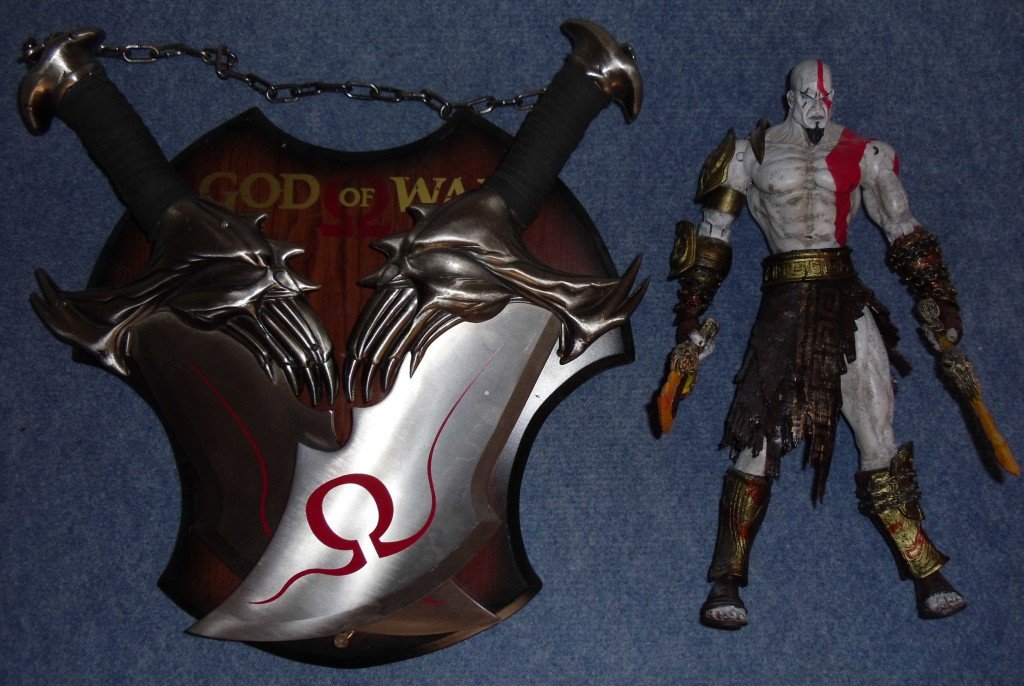 True story: I sliced my finger open on my Blades of Chaos replicas whilst trying to prove how totally blunt and harmless they were. Still, they’re one of my favorite pieces in my collection, from one of my most-beloved franchises. They’re full size, look sweet on display, and are pretty hefty to hold, as well as being the ideal way in which to represent your devotion to Kratos, the true God of War.

The likeness of the Kratos figure is uncanny, as well as the blades, and it comes with a rather delightful severed Medusa head. It talks as well, with a button on Kratos’ back triggering a few incredibly poorly impersonated phrases, which do nothing but defecate all over TC Karson’s stellar vocal work. Best to just keep that switched off then… 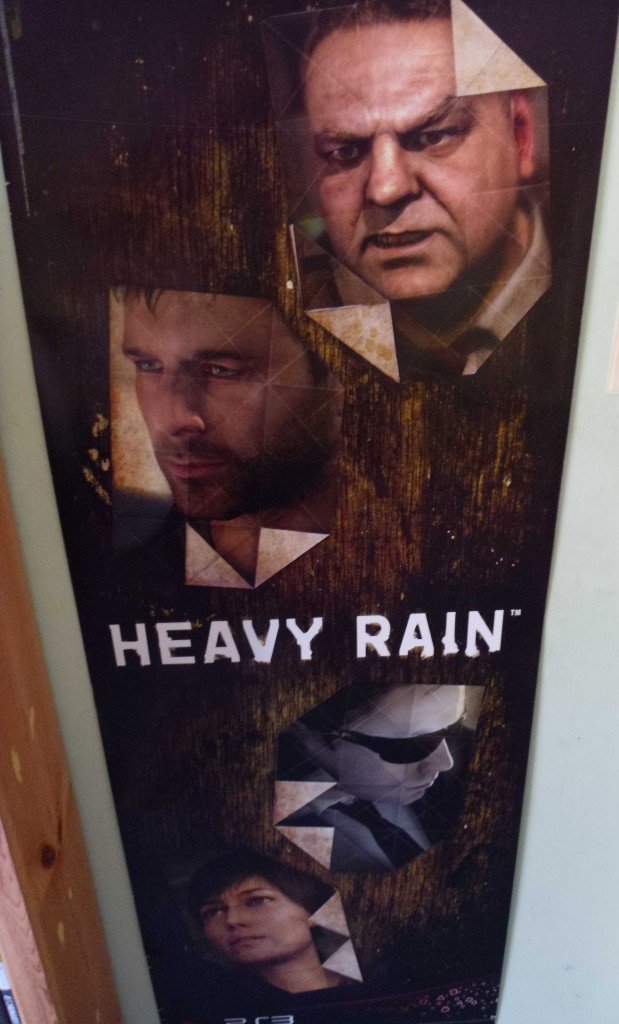 This little (well, large) beauty stands at over 5ft tall and proudly displays Heavy Rain‘s four playable characters: Scott, Ethan, Norman, and the oh-so-lovely Madison. Getting to see the events of a classic murder mystery unfold via the perspectives of four such engaging and well-rounded characters really does create quite the compelling experience. And those same four characters just happen to make for one fine looking poster. 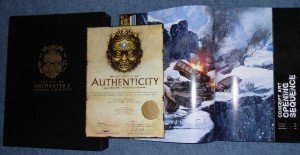 Another true story: purchasing this book got my bank account blocked. Turns out spending large amounts of money on an obscure Australian publisher’s website will get flagged up as suspicious… who knew?! This is the most I’ve ever spent on a piece of memorabilia; this edition of the art book is limited to 200 copies worldwide and includes a Certificate of Authenticity hand-signed by the likes of Naughty Dog‘s Evan Wells and Amy Hennig. The art included is simply stunning, which is hardly surprising given how sublime Uncharted 2 looks.

First up, we have a cool little “chibi” model of Agent 47, of Hitman fame. This miniature version of the figure that came with the Professional Edition of Hitman: Absolution was given out as a promotional item at an expo last year, but I, of course, got it from eBay. The Hitman series offers some wonderfully unique, cerebral gameplay, with my personal favorite still being the second entry, Silent Assassin.

This great figure of Isaac Clarke (Dead Space‘s protagonist) features a light-up visor and health indicator for extra badass-ery (totally a real word). EA’s Dead Space is an odd series; in the space of one generation, it seems to have gone from a fresh and exciting new horror IP to a shallow, sell-out of a game that favors commercial success over keeping the fans happy. It still holds a place in my heart though, even if the series has nearly stopped that particular organ from functioning on several occasions.

Ah, Sackboy, even the most stone-hearted of gamers born and bred on a diet of gruesome shooters couldn’t fail to raise a smile upon seeing Sony‘s little hessian hero, and this figure captures him at his most adorable. The LittleBigPlanet games really brought an unrivaled level of creativity and a literally endless pool of user-generated content to the table, even if it took some effort to sort the wheat from the chaff.

And finally for this picture, we have the infamous Dr. Salvador from Resident Evil 4 and Chris Redfield from RE 5. There’s little that can be said about Dr. Salvador; the first instance in which you hear his chainsaw whirring in the village in RE4… well let’s just call it an “underwear-browning” moment. RE4 is one of my top games of all time, and Salvador is a big factor in that. Unlike many, I really enjoyed RE5, primarily because it felt like an HD RE4, and the quality of the Chris figure from NECA meant that it was the ideal way for me to mark my love for the game. 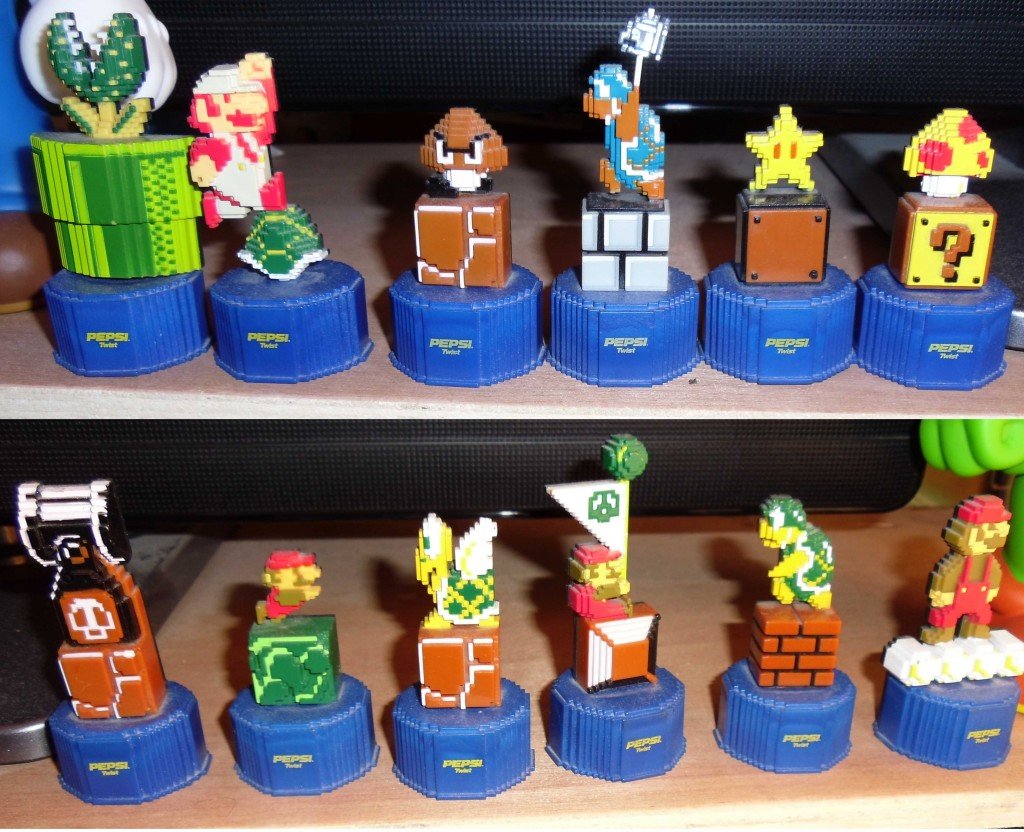 And now we have the Nintendo collection. First up, there’s these great Mario Pepsi bottle tops (an incomplete set, to my eternal shame). Coming in an old-school pixelated design, these bottle tops were only available in Japan. 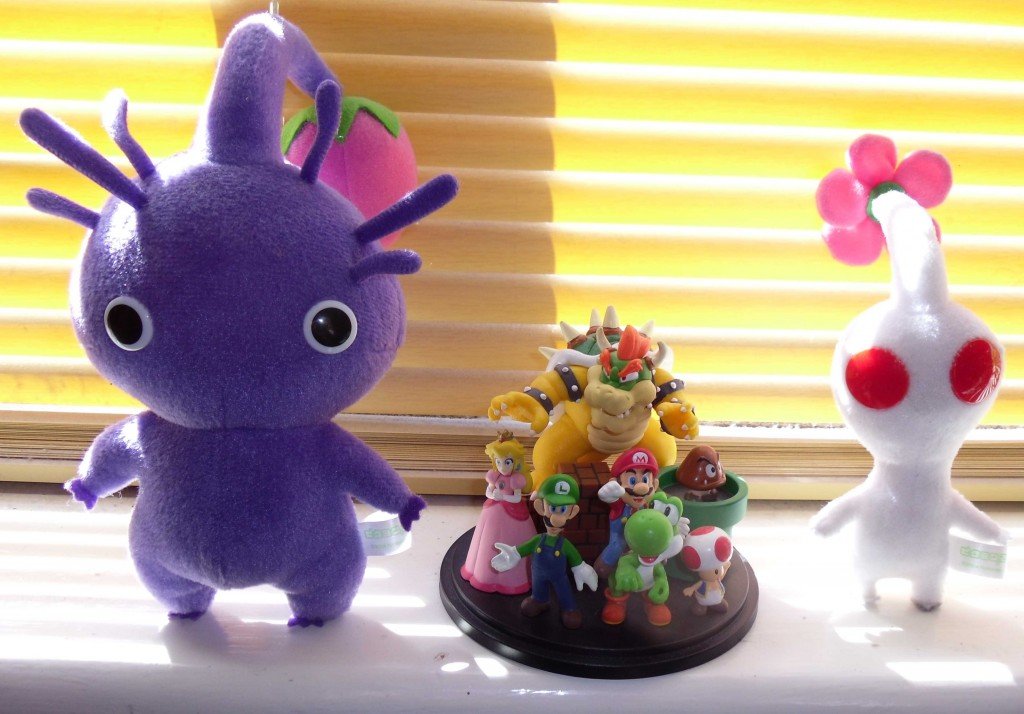 And on the subject of Japan, that is the only place where these Pikmin plushes were released. I adore the Pikmin games, with the whites and purples being my two colors of choice, primarily due to their infectious charisma and, in the case of the white Pikmin, amusingly sinister nature. The upcoming release of Pikmin 3 may well force me into finally throwing down the cash for a Wii U.

The Mario characters figure is only available through Club Nintendo and eBay. But for me, the arduous process of saving up my stars to get this little beauty was well worth it. The quality of the sculpture is very impressive indeed, with all the gang in attendance. A must for any Ninten 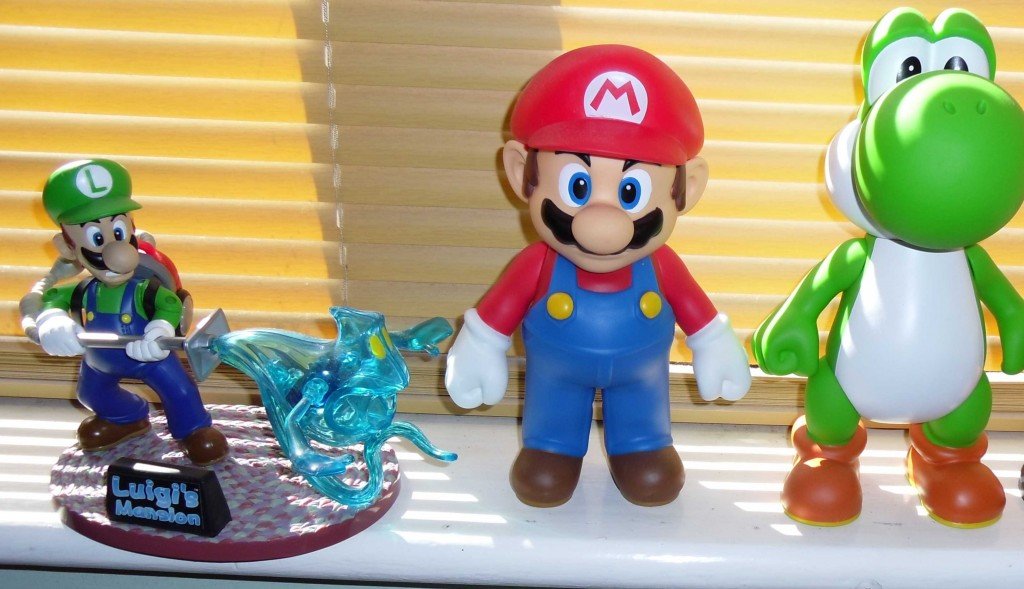 The large Mario and Yoshi figures from Banpresto offer an almost-uncanny likeness, and their bold, colorful design will brighten up any gamer’s dark, dank cave. Like many, I grew up with Mario and company; the Italian plumber has starred in countless all-time classics down the years, and personally, I think I’d go for the Galaxy games on Wii as his greatest achievements yet. Mario Galaxy 3 announcement at E3, anyone??

“Awesome”. That’s the only word suitable for describing Joyride’s Luigi’s Mansion statue. There were only 500 ever made, so it’s a tough one to get hold of, but well worth the effort. Prompted into scouring eBay for it by the recent 3DS sequel, I wasn’t disappointed, especially with such incredible attention-to-detail, right down to the visible heart inside the ghost.

Ah, and we’ve left the best until last. Metal Gear is without question my favorite series in gaming, with MGS3 being my top game of all time. With the advent of Metal Gear Solid 2, Konami commissioned a series of seven mini statues featuring key characters from the game, with another seven being released in conjunction with the arrival of the Substance re-release. I’m proud to say that I own all 14, and completing the collection was no easy task, with my bank balance taking a beating in the process. The figures undoubtedly look great, but are only available in Japan, and so, yet again, eBay is your best bet for these.

Then we have a set of four figures: Vamp, Raiden, and Old Snake from MGS4, and The Boss from MGS3. The quality and likenesses of the entire set are fantastic, making them well worth tracking down. A quick mention must be given for The Boss: for me, she is quite simply one of (if not, the) greatest characters in gaming. She is such an enigma, and you can really feel Snake’s pain at the apparent betrayal from his ex-mentor after she apparently defects to the Soviet Union at MGS3‘s outset. But learning of her sacrifice at MGS3‘s conclusion finally sheds some light on her motives; a real tear-jerking moment to be sure, and one that any self-respecting gamer simply must experience. 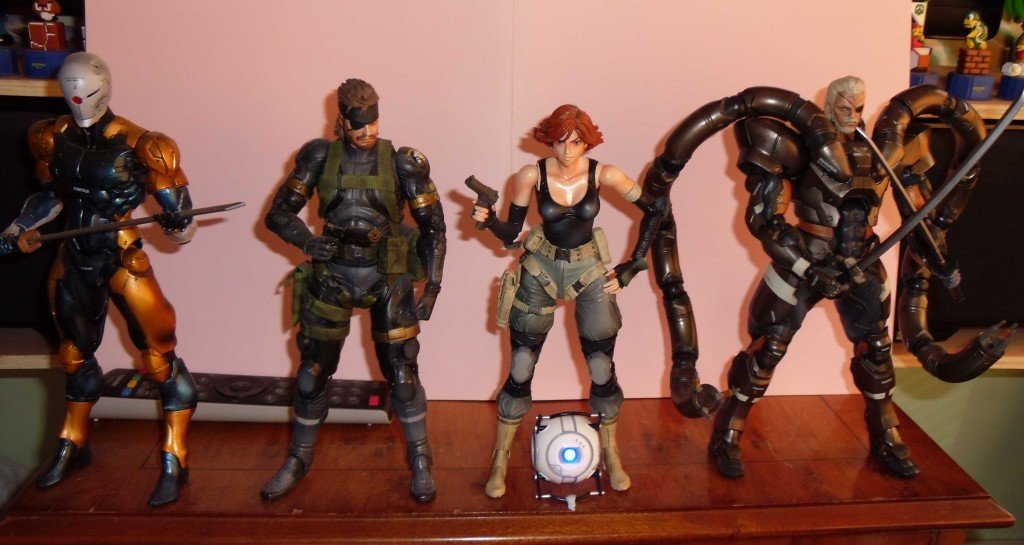 My favorite Metal Gear items are definitely the four Play Arts Kai figures, though. Their level of detail and general quality is quite literally jaw-dropping, although it has to be said that this is reflected in the price (Solidus Snake can cost over £100/$155). The four I own are Cyborg Ninja and Meryl from MGS1, Solidus (complete with awesome tentacles) from MGS2, and Big Boss / Naked Snake from Peace Walker. Simply put, if you love Metal Gear and have the cash, then don’t hesitate in picking up one of these figures, or another in the series.

Slightly incongruously, we end the grand tour of my gaming memorabilia collection with the small Wheatley keychain that features in the picture with my Metal Gear Play Arts figures. Portal 2 is a phenomenal achievement, one of developer Valve‘s best, and Wheatley (voiced by the wonderfully Bristolian Stephen Merchant) is a huge factor in the game’s quality. This great little keychain with light-up “eye” is a nice reminder of Valve‘s remarkable ability to infuse robotic machines with such engaging character and charm.

And so there we have it. You’ve now seen the vast majority of my ever-expanding gaming merchandise collection, as well as the eclectic range of games that tickle my fancy. All that is left to say is thanks for welcoming me to the New Gamer Nation family, and please populate that comments section below with any of your musings on the world of gaming memorabilia. And, of course, you can let us hear about the items that you most cherish and/or lust after… because, y’know, that’s perfectly natural… right??