After Resident Evil 4 cemented itself as one of the greatest horror games ever back in 2005, Capcom decided to double down on the more action-fueled elements that were featured in 4, and injected those directly into the veins of the boulder punching fest that was Resident Evil 5 and the off-tone Resident Evil 6. The series had lost what it was built upon: horror, helplessness, and the feeling that you’re royally screwed.

With Resident Evil 7, it’s almost entirely back. The horror is back, especially in the first hour; the helplessness is back, and you’re no longer a roided out zombie killing Brock Lesnar; and the feeling of being absolutely screwed is apparent from your first step into this tortuous game. This isn’t just another Resident Evil game – it’s an image change, a clean slate, and one that will go down as one of the boldest, successful moves for a major franchise to make ever. 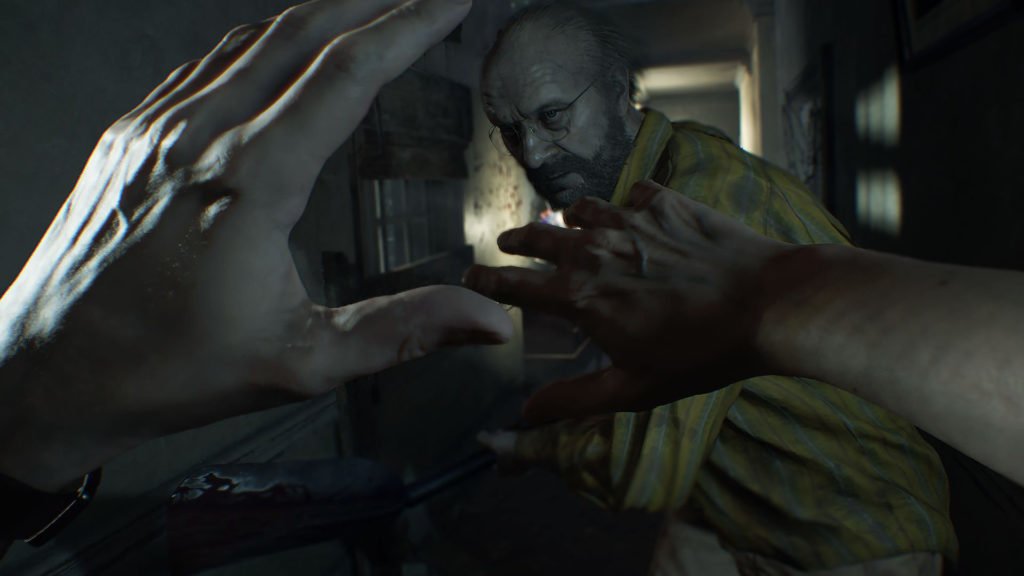 Resident Evil 7 takes away most of the international espionage and military angles from previous games and settles for a story of finding a missing loved one. You play as Ethan Winters, who just received a video message from his wife, who’s been missing and presumed dead, that she’s alive and that he should stay away. Naturally, Ethan ignores this and travels to Dulvey, Louisiana to find her. There, Ethan encounters the Baker family, who seem to enjoy decorating their home with corpses and puzzles. After a few encounters with the family and Mia, Ethan learns something much more sinister is at hand, and that something is seriously wrong with everyone in the house. Later, a woman named Zoe gets into contact with Ethan to try and help him escape and uncover the mystery surrounding the Baker family. The story doesn’t do too much to complicate itself or take itself too seriously, but its engaging enough that you’ll want to power through all the terror just to see what happens.

This time around, the camera is in first person as opposed to third person like most Resident Evil games. This, paired along with the tight corridors, powers the feeling of claustrophobia and uneasiness knowing that someone, or something, could sneak up on you. And sneak up on you they will. Various members of the Baker family will be following you around while you try and progress through the game, and they can’t be killed, only momentarily incapacitated. It provides a constant fear of the unknown, and it makes every move to solve a puzzle or unlock a new room a gambit.

You aren’t entirely helpless to defend yourself, though. While the first hour sees Ethan survive mostly by evasion and hiding, you eventually will find weapons like guns, axes and knifes to fight back the Bakers and the other enemies you’ll encounter, called the Molded. Weapons have a nice weight to them, as each shot or swing feels powerful. This is a horror game, but it still has its roots in the action-horror realm. Resident Evil 7 strikes a great balance between feeling outmatched without actually making you outmatched.

Boss battles are throughout Resident Evil 7, and they’re both some of the greatest moments in the game and the weakest. Without giving too much away, some boss fights feel inventive and are a terrifying roller coaster of emotions, while others feel like you’re pumping endless ammo into the boss without any progress. The boss fights also generally have a gimmick to them that doesn’t always pan out for the better.  There were several instances that made it seem like the mechanic to win the boss fight wasn’t really working. The boss fights have all the climactic moments you’d want, but their execution isn’t as smooth as the rest of the game.

Back from old-school Resident Evil is the inventory management system, which forces you to pick and choose what you’re carrying, and it makes you decided how you’re going to approach obstacles. Should you take more ammo in order to fend off enemies, or should you take more healing items to counteract a brutal attack? And if you take your shotgun, it’ll take up two valuable slots in your inventory, which may force you to leave useful found items behind. While you can still store your items in a box that transfers items between each save point, it’s still a tough decision to make, and one that you may regret later on. 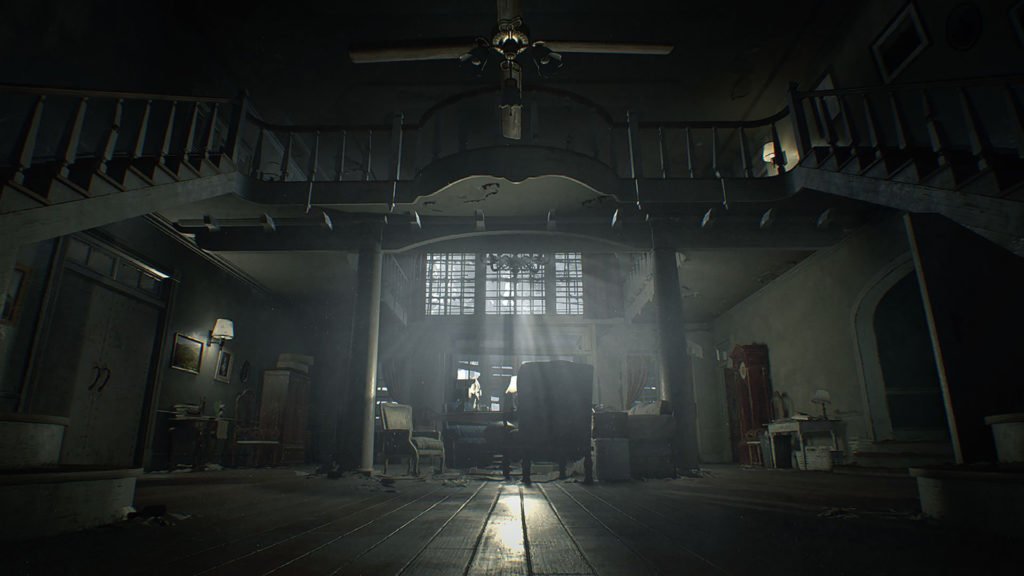 The Baker estate is absolutely terrifying.

Roaming around the Baker estate is terrifying, and the amount of detail put into every room and area is impressive. While the setting for the whole game is mostly contained into a select few areas, the detail into each is memorable and serves a specific purpose.  From rooms that look mostly normal, areas that show a glimpse into the terrible actions of the Bakers like the dissection area, and much more. Areas offer a look into the past lives of the Baker family, and those looking to expand upon the story will find notes, photos and tapes that will reveal more about characters and their motivations.

One of the best throwbacks to the original Resident Evil is the door mechanic. In the first Resident Evil, it was a short loading screen where a door would open into black nothingness. It seems simple, but it instilled so much anxiety not immediately knowing what’s on the other side of the door. In Resident Evil 7, the doors are more refined, and, hard to believe, even creepier. Doors have weight, and they open just a little bit before exposing the room on the other side. It makes every entrance into a “safe” room a triumph, and it makes every entrance into danger that much more heart-attack inducing.

Resident Evil 7’s sound design is impeccable, and it’s one of the most impressive features showcased throughout the entire game. With the constant threat of enemies lurking around, you’ll hear floorboards creak, doors screech open and sounds that you swear came from your own movement – but what if it wasn’t? Not only is the imagery nightmare fuel; the sound design will make you question your sanity. 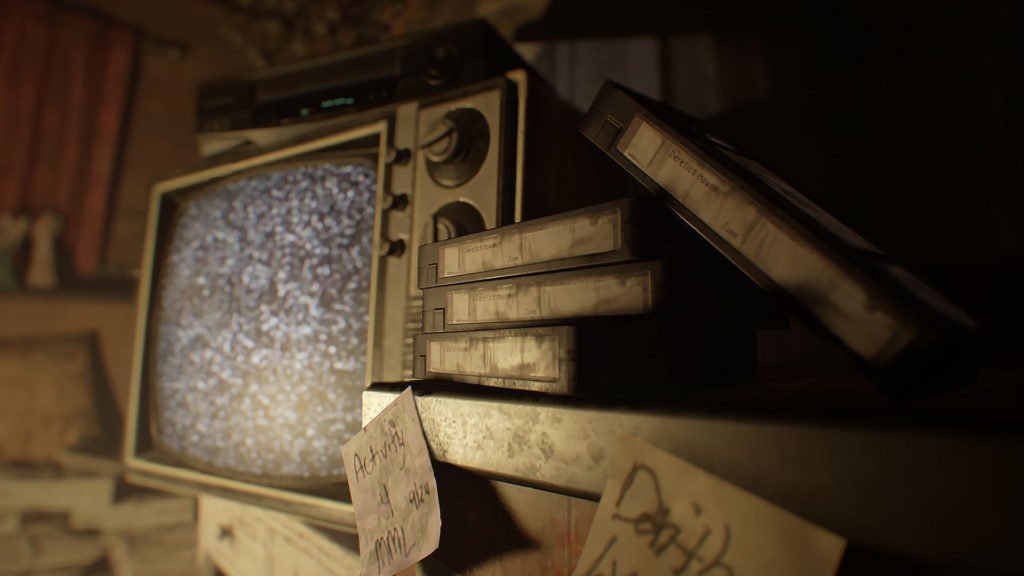 If you’re feeling especially brave, you can play the main game entirely in VR. Even in sections where you know nothing happens, VR makes it that much more intense and genuinely unnerving. Not only is the VR mode well designed with several moments grabbing the game’s claustrophobic focus and cranking it up to 11, it’s actually a bit easier to aim, because you can aim your shot by looking at whatever enemy you want to kill.

The latest entry in the Resident Evil franchise isn’t just a clean slate to build off of, it’s the king of video game horror taking its crown back after years of an unfocused tone. By taking elements from its past and updating them to fit modern game design, Resident Evil evolves without losing the best elements from previous releases. Even for those not interested in horror games, this is enough of a hybrid between action, puzzle and horror elements that it could sway thin-skinned gamers into trying it. This is a leaner, meaner Resident Evil that will chew you up, spit you out, and still have you coming back for more.

This review is based on a review copy of the PlayStation 4 version of Resident Evil 7: Biohazard, developed by Capcom. Review copy provided by Capcom.