Like Soul Sacrifice before it, PlayStation Vita’s Freedom Wars borrows heavily from the Monster Hunter series that once called PlayStation devices home. While its concept is certainly similar, Freedom Wars introduces enough of its own flavor to be impressive and fun in its own right. Small design flaws stop Freedom Wars from becoming something unforgettable, but there’s no denying the compelling universe and downright addicting gameplay.

Freedom Wars casts you as a “sinner,” a servant of a government — also known as a Panopticon in Freedom Wars — that is deemed useless to the Panopticon and is given a sentence of one million years and must complete missions in order to lower your respective sentence. Don’t think your sentence can only go down, though, because any violation of rules will add significant years to your service. From the start, you have little to no rights — you don’t even have the right to lay down and sleep, or even the right talk to members of the opposite gender. You can avoid gaining more years on your sentence by earning entitlement points from missions and spending them on rights that allow you to do otherwise illegal acts. Buying entitlements isn’t limited to simple acts, as you can also buy the right to wear certain clothes or even perform tasks without your government issued accessory, which is a cybernetic figure that’s always by your side. 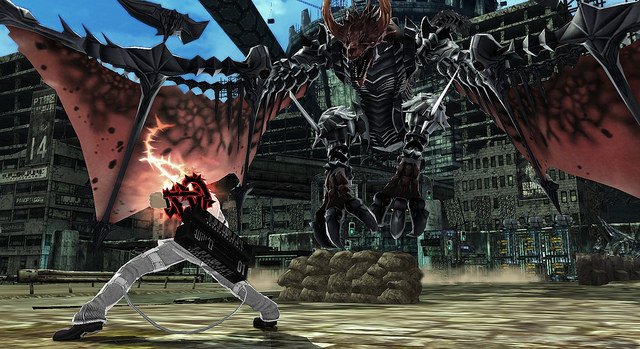 Once you actually join your fellow sinners on the battleground, that’s where the bread and butter of Freedom Wars lies. Battles contain small grunts like human soldiers and small robots, but your main adversaries will be against giant robots called abductors — and those fights are awesome. Unlike the small grunt soldiers, abductors take a lot of time to kill, and it’s deeply satisfying to take one down. You can use small melee weapons to saw through their armor and cut it off, or you can go for a ranged approach and riddle enemies with a chain gun or even a rocket launcher. Though abductors are initially simple in design, latter levels introduce more complex abductors that vary in abilities and strategies, and it really makes each battle unique even when you play on the same handful of maps.

Though combat in its simplest form may be comparable to Monster Hunter, the inclusion of tools known as “thorns” changes up the formula significantly and makes fights in Freedom Wars much more mobile and vertical than Monster Hunter. Thorns can be used to latch onto walls, attach to enemy abductors in order to attack specific areas, or even used to drag enemy abductors down to momentarily incapacitate them in order to unleash massive damage. Thorns come in three different varieties: traps, healing and shields. You can choose any of the three, and it’ll help determine what role you’ll want to play in battle. Those with trap thorns can distract abductors in order to allow someone to saw off one of their components; healing thorns give the ability to heal other units and even cast a giant healing tree that others can stand underneath in order to heal without the direct help of the healer; and shield thorn users can create blocks or absorb damage in a more tank-like role. 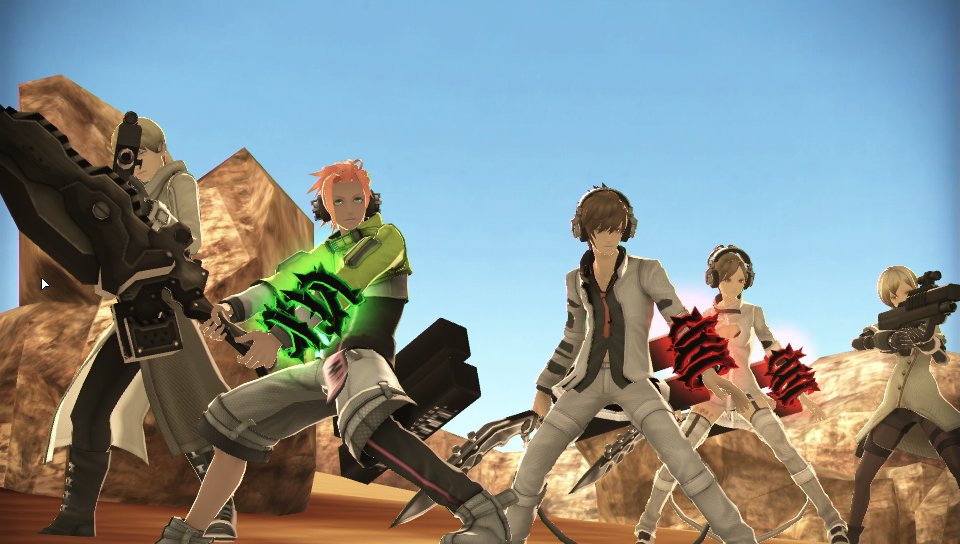 Upgrading isn’t done through new clothes or armor — both of those are purely cosmetic — but it’s done rather through new weapons and equipped augmentations you can improve your character with. You can find new weapons on the battlefield from slain enemies, but in order to get the truly powerful weapons, you’ll need to collect parts from abductors and missions in order to construct said weapons. You’ll gain the ability to run factories which you can create and upgrade weapons, munitions and augmentations from. Creating these items takes real-world time, but you’ll unlock bonuses which allow you to shed some time off the build time.

Freedom Wars allows you to attempt any of the story missions with your friends in online or ad hoc play, and I found the already enjoyable combat even more so with a buddy alongside me. Suddenly instead of relying on myself to do everything, I was hatching plans with my partners. One of us would do heavy damage with a rocket launcher or a heavy melee weapon, two of us would hop on the abductor and start sawing off parts in order to take away their weapons and defense, and another would heal everyone and attempt to drag the abductor down when they had the chance. This new found reliance on teamwork opened up Freedom Wars more than I had previously thought possible, and taking down an abductor while having a specific role in a team made every battle much more meaningful and I found greater achievement by doing so.

There are some odd design choices throughout Freedom Wars that makes navigation slightly annoying. If you choose to play story missions with friends, you’ll have to go make a separate room and play the missions without the story attached. Once you complete all the missions available at your level, you must go into single player mode and load up every single mission and watch the cutscenes and dialogue that surrounded the mission. I played almost the entirety of the story missions with a friend, so I found myself having to watch hours of cutscenes in order to unlock new missions, which made the story drag on and I lost my interest almost immediately. The story just seems to get in the way rather than making the context of a fight more exciting. I just wanted to go in and enjoy the combat, but I was forced to interact with characters that, frankly, just aren’t that interesting. Worse yet, the game doesn’t simply skip over the mission, you’ll actually have to load it up, and then when the mission starts, it’ll immediately recognize that you completed it in multiplayer and show you completed the mission.

Freedom Wars certainly has its annoyances, but the versatile combat against abductors and quest for elusive gear is more than satisfying enough to overlook the shortcomings. The story gets in the way more than it helps guide you along, but it’s easy to cut through the jungle of dialogue in order to get back to the sweet gameplay center that lies within. Although it borrows many elements from Monster Hunter, Freedom Wars has enough originality to stand on its own legs and provide a different take on the popular monster hunting genre.

This review is based on a retail copy of the PlayStation Vita game Freedom Wars by SCE Japan.