Tom Clancy’s The Division has been taking up almost all of my time. I recently wrote a review on this site but didn’t talk much about the Dark Zone. I was too much of a newbie in it to really say anything worthwhile and I wanted to really dive into the mysterious PvPvE area before giving my thoughts. There is plenty more to explore and I’m far from an expert now. What I can say is I am not stopping anytime soon.

The Dark Zone is unpredictable organized chaos that’s funneled down to the concept of obtaining loot. The chaos shines brightly when it comes to how you obtain said loot. It could be taking out the enemy A.I., or stealing it from some poor sap who left their guard down. It’s a scary dog-eat-dog world that has serious repercussions because you are playing against real people. Real people that hold grudges, act irrationally and find enjoyment in ruining your fun. It cannot be tamed and it shouldn’t be tamed. It’s the Wild West and I love it.

Throughout my journey in The Division, I would poke into the Dark Zone now and again. I wouldn’t go too far from a gate and only get some basic loot. It wasn’t until I hit level 30 and I met up with some of my friends who were already deep into the end game content. They were around a DZ rank of 50 and knew all the good looting areas. They took me along as I ran the gauntlet with them.

The Division is all fun and games until you step into the Dark Zone. Don’t get me wrong, it’s still fun, but with your loot on the line it takes a much more serious demeanor. I followed my two friends as they told me the path to take. They ran this many times before on their quest to gain the best loot. The streets were empty and the light was dim painting the clear picture of a desolate wasteland only traversed by the most dangerous people. I wasn’t worried about an ambush yet. We had nothing on us so we weren’t even a target in a rogue agent’s eye.

My friends led me down into a subway tunnel and we found the first named enemy we were looking for. The named enemies in the Dark Zone are much tougher than the main game and it took several minutes for us to take him down. We got our loot, nothing special, but still worth extracting. We kept going taking on A.I. enemies and collecting some loot. Anything we didn’t want we dropped to make sure our bag was filled with only the essentials. We didn’t want to extract twice if we didn’t have to.

Now it was time to extract. We headed towards the first zone and the exaction was already called in. We just arrived as a bunch of other players loaded up their loot. We didn’t make it before the rope was filled. This left us in a dangerous position. We had to call in another extraction and wait while half a dozen other players were standing around now loot-free eyeing us as deer at a watering hole. We called the extraction in and took cover.

Waiting for an extraction is one of the longest countdowns I’ve experienced in gaming. At any second we could be attacked. All the farming we did could be wasted. Every person that even pauses near you could be a threat. Luckily, no one went after us. The rope dropped, we extracted our loot, and could finally relax slightly. We weren’t worth killing anymore. 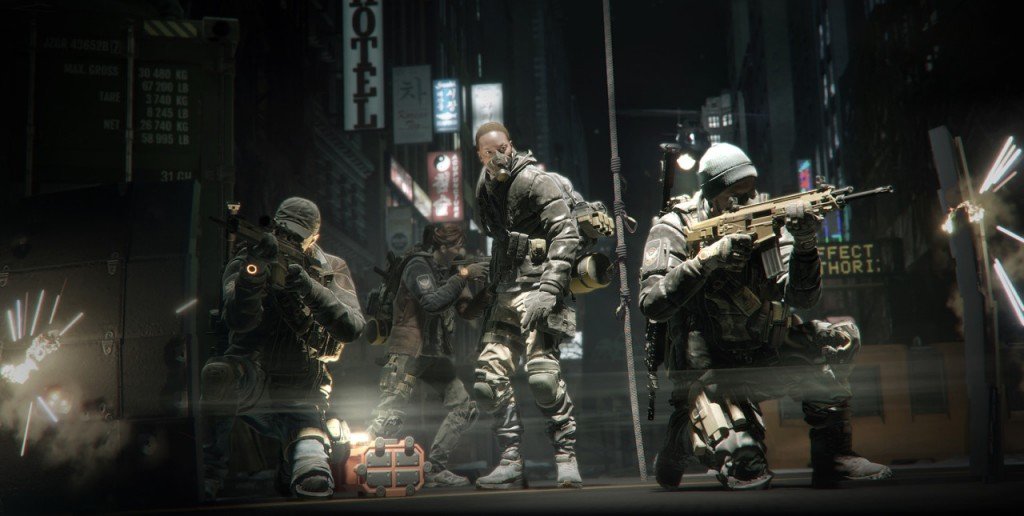 Now it was time to head back out and keep farming. The A.I. enemies are tough and not paying attention can quickly cost your life. You also need to keep an eye on the back of your head because another player could be waiting for your team to be weak before they strike.

There is never a moment in the Dark Zone where you can completely relax. One farming trip that started out as normal suddenly turned into full-blown paranoia mode as we realized someone was following us. Were they just here to help and get loot? Did they want us weak before striking? Waiting for an A.I. to kill one of us so they could scoop up our gear without going rouge? Or were they trailing us for a bigger team that would ambush us after we did all the hard work?

There was no way to know. We tried communicating with him but he gave us no answer. It was all the more ominous. We could have easily taken him out, but then we would be rogue. A target on our back while we were carrying loot. Maybe that was his plan? Be the bait, make us go rogue, then his friends come in for the reward. Could he just be messing with us? There were too many possibilities and unknowns in this encounter.

We carried on as normal but kept an eye on him. Once we were finished we decided we should sprint to a popular extraction zone. I learned those are often fairly safe. If anyone goes rogue there are a dozen other people that will immediately take them out, so it’s in your best interest to play nice. We made it there safe and sound. Extracted our loot and never saw the guy again. I never knew what his plan was.

It’s an anti-climatic end for sure, but for fifteen to thirty minutes it was constant tension. Even when nothing happens it’s still a memorable story. The interaction with other players is so unpredictable you can’t help but think of all the possible outcomes. It’s terrifying and exciting. It makes the Dark Zone the shining light in The Division. 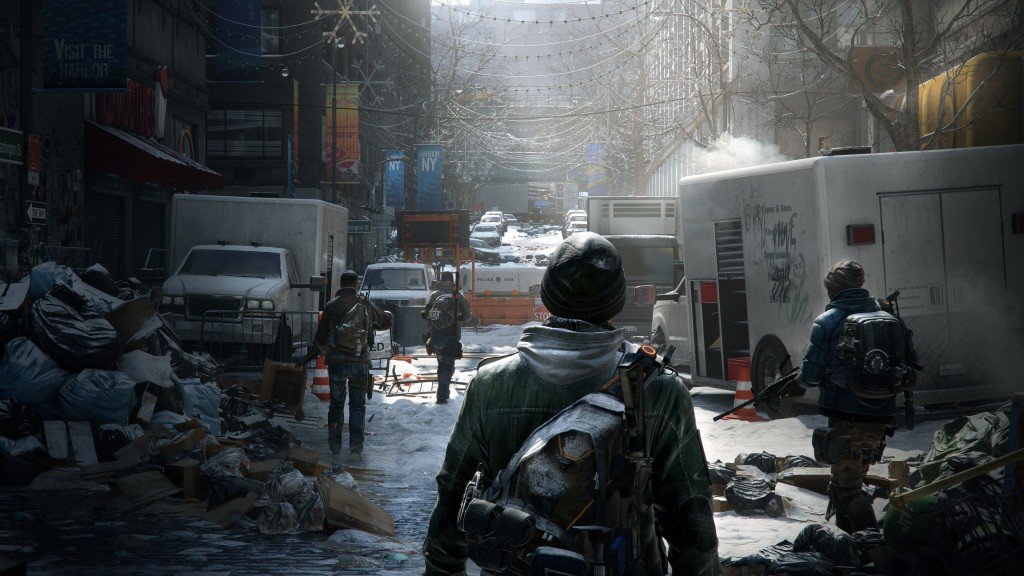 My friend died once leaving his loot on the ground. I was standing near it waiting for him to come back. Someone swooped in and scooped it up. They kept running and I had about five seconds to decide if I wanted to go rogue to get it back. If it was amazing loot I wouldn’t hesitate, but it was only decent. Was it worth it? In the end, I decided no. They were easily stronger than me anyways and there was no way I would survive being rogue. My friend wasn’t upset, he completely understood.

It doesn’t translate to text well, but those five seconds where I saw the thief running down the street made my heart beat fast and my palms sweat. I had to make a choice. A real choice that would actually affect me, my friend, and the random person. This was not a scripted event I could replay if I didn’t like my outcome. I had one shot, one chance to decide what I would do and then very much like real life I would have to live with it. That is why I love the Dark Zone. It has consequences that actually matter.

Some runs in the Dark Zone will be your everyday farming and it can feel somewhat tedious. Even then, there’s still that added tension that some rogue agent may strike at any moment. You can’t let your guide down. I told three quick stories that made me love the Dark Zone and nothing even happened in them. It was all paranoia surrounding the tense atmosphere. I haven’t mentioned the times I went rogue or hunted down a group of rogue agents. Those don’t need an explanation for why they’re fun. 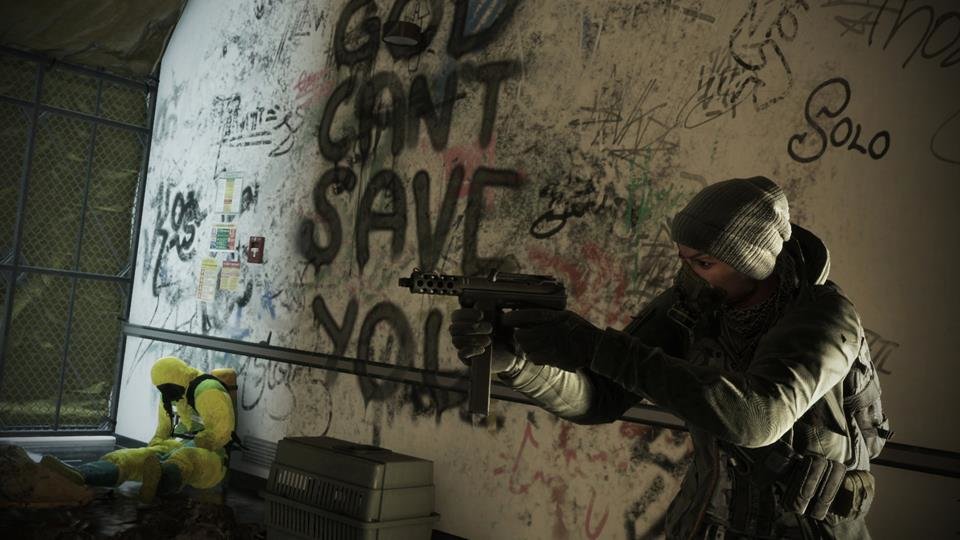 The element that the Dark Zone has nailed perfectly and makes it so addicting is how real the consequences are. It’s not a scripted event like the main game and your actions really do have consequences. You are making life and death decisions. Video games often don’t have much weight when it comes to dying aside from losing progress when you reload from your nearest checkpoint. In the Dark Zone, you could lose gear that took you hours to get, or inversely, you could steal gear from someone else hard at work. Good or bad, it’s up to you.

There is no meter telling you your karma is dipping and you won’t be rewarded with this item, ability, real ending, secret conversation, or whatever games try to hold above your head to play a certain way. It can feel like real life when you have to make decisions that will affect others and stick with you. You want to kill a person and steal their stuff? Go for it. If you manage to extract it alive that is. But just like real life that person can know your name in the game and hunt you down. Just because it may not benefit him in-game doesn’t mean it won’t satisfying him in real life.

These are not computers that you can predict. Maybe someone is just bored and wants to ‘eff some stuff up. You never know when it comes to people. That’s what makes the Dark Zone so amazing. There is great loot to find and make your character stronger, but I love it because of the other real people. The unpredictability, the irrationality, the tension, the chaos, the rush, and the fear.

Every time you enter into the Dark Zone you may not come out alive. You may be beaten and mugged. You may run for your life barely escaping. You could lose it all or take it all.  It’s fight or flight and it’s amazing. The Dark Zone is already eating any spare minute I have and I see no end in the near future.