From Grubby Hands comes an artsy-style game entitled Boy Loves Girl, a fun and addictive type of game that only costs 99¢ and is available only from the iOS App Store. 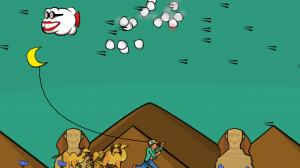 In this game, which is now available through the Game Center, your character is a young boy falling in love with a girl who he is literally chasing. Throughout the levels you encounter animals which the girl finds adorable, so you want to catch them and give them to her as a gift to win her love. These animals, including gazelles and kangaroos, are not easy to get a hold of. In turn, the game becomes more addictive as the difficulty increases. You may find that getting past the first level on the first try is not as easy as it seems.

Playing the game is rather simple. Before each level, the player will be given objectives to complete, such as gaining a certain amount of smiles or various other tasks. Basically, the boy is running with a kite that is a moon attached to a string, and the only control is sliding up and down on the screen to move the moon up and down to avoid obstacles. The obstacles the player avoids are various types of clouds – running the moon into them or anything that comes from the clouds (rain, lightning, etc.) will detach the 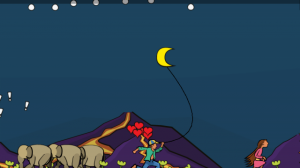 moon from the string. At the end of the level, the player will be rewarded with the specific animal the girl wants. It is quite funny to see a game based around finding love to be controlled easily, because most of us know that in real life it is the complete opposite.

As far as graphics go, the game looks good, and it is nice to see a game that is different from others. It seems like an art-inspired piece, with a subtle but crisp art style. The soundtrack only features one musical piece that plays throughout the game, but it does not get annoying because of the mellow tone. As mentioned before, the controls are very easy, but the game may suffer from an oversimplified control scheme. Use of another mechanic or just something for your other thumb to do would have added some variety to this title. 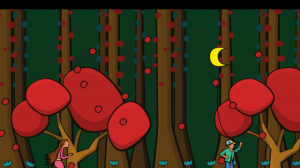 Overall, this game is underrated. It is very different from other games from a graphical perspective and is fairly simple, with only one button to worry about. All of the levels are very well designed and look great to play on. However, only one control may be a downside because after a while it becomes too repetitive. Some suggestions to improve the game could include different types of mini-games or levels to play, expanding the somewhat repetitive gameplay.

The girl that the boy is chasing is playing hard-to-get, and we assume a dinner and a movie date will not satisfy her. With over 50 levels and seven worlds, there is plenty to get through, helping the player stay in this game for a while. Paying a buck to play an original, creative game like Boy Loves Girl is definitely worth it and the game therefore gets our solid recommendation.

You can watch a video of actual gameplay below: