First thing’s first: Device 6 is a weird game. There’s no getting away from it; Swedish developers Simogo have crafted a brilliantly gripping, thought-provoking, creative, but oh-so weird interactive storybook. But that isn’t to say this mobile game isn’t worth your time or money, because it most certainly is. Gaming is overly saturated with copycat titles in this day and age, so anything that comes along and dares to be different really deserves to be treasured. Device 6 very much fits this bill, and you’re about to find out why…

Device 6 tells the tale of Anna, a woman who wakes up on an island with no recollection of how she came to be there or what her purpose is in this strange place. As she explores and solves puzzles, the mystery of exactly what is happening grows deeper and more sinister by the minute. It remains unclear throughout most of your time with the game quite what is going on; there’s some stuff about mind control and human experimentation in there, and it becomes apparent that someone is very reluctant to let Anna leave the island. There is even the suggestion that you, the player, are a part of the experiments somehow…

Device 6 isn’t necessarily a “game” in the traditional sense. When you start “playing” the first of its six chapters, you’ll think you’ve accidentally picked up your Kindle and started a new book. You see, Device 6 is a text-based adventure, but this is no ordinary piece of literature. Rather than pages, the game presents itself as one stream of text that you scroll through with your finger. In a stroke of genius, the layout of the text mirrors what Anna is doing at that moment, so if she turns a corner, then so will the writing on-screen; if she ascends some stairs, the text will take on the staggered appearance of a staircase. This might only seem to be a small touch, but it’s indicative of a piece of work that goes beyond the norm to really immerse the gamer in the overall experience. And there may be some who assume these “gimmicks” are an attempt to cover up sub-par writing, but that couldn’t be further from the truth. The quality of the prose is sublime throughout, as it expertly provides moments of tension interlaced with tongue-in-cheek humour. If ever there was an example of a game which cannot be done justice by screenshots, then Device 6 is that game

In terms of presentation, the game really is genre-leading stuff, it has a quirky style all of its own. As Anna explores her surroundings, occasional pictures will appear on the screen, which act as windows into our protagonist’s world. These images often need to be scanned and studied intently, as they invariably contain hints that will aid you in solving the game’s enigmatic puzzles, or else you’ll be required to interact directly with them to input solutions or uncover more information. And it isn’t just visually that the game innovates, it experiments with sound too. If Anna is walking down a corridor and hears a sound from a nearby room, this will fade in and out of your device’s speakers as you scroll through the text and get nearer to (or further away from) the moment when she enters the room. This really is like no storybook you’ve ever read before.

The mental challenges that Device 6 contains are an acquired taste. Unsurprisingly for such an aloof game, the puzzles can come across as overly obtuse and dumbfounding at times. They generally take the form of riddles, the answers to which are dotted around the environment you’ve just been reading about, meaning that you’ll have to scroll back through the text to look at pieces of information that were seemingly inconsequential first time around. There is an undeniable thrill to solving these puzzles and pushing the narrative forward, and for the most part, they strike the perfect notes. However the lack of clarity in a couple of the conundrums only really serves to cause frustration and momentarily remove the player from the immersive atmosphere that the game works so hard to create. 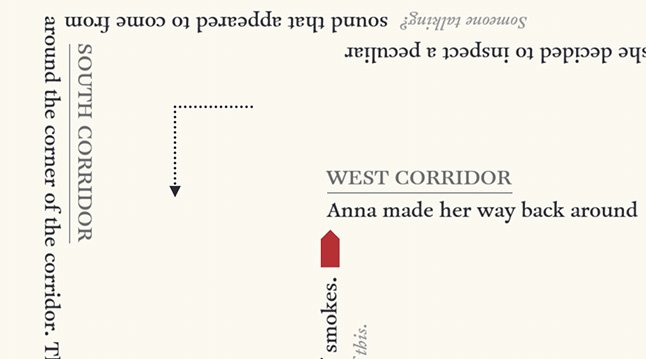 Seriously, you’ll just have to take my word for it and pick this game up

This ambiguity spreads to the overall narrative of Device 6 as well. It’s one of those elusive stories that you never quite feel you’ve got a grip of; just when you’re expecting answers and clarity, you’re hit with more questions and murkiness. That isn’t to say it’s not enjoyable though. I unintentionally finished the story in one sitting (it took around two and a half to three hours) because I was so eager to see what it had to throw up next. I walked away confused, yet oddly satisfied. Anna spends the entire game trying to fathom quite what is going on around her, yet never quite does so, and the experience is all the more engrossing because of it. Some questions are best left unanswered, and Device 6 will no doubt lead to much forum discussion as to what it is truly about.

The game also seems to be making a few comments on the gaming industry as a whole. In keeping with the modern trend for absolutely everything to be reviewed and rated by anyone and everyone, at the end of each chapter you’ll be asked a few totally meaningless questions about your opinions so far, under the paper-thin pretence of the game “tailoring the experience to your preferences”, even though it is quite clear it couldn’t care less about what you think. At the end of this process, you’ll be awarded a totally arbitrary 100 points, which is more akin to a patronizing pat on the head than a genuine reward (although these are linked to a brilliant moment at the game’s conclusion that cannot fail to raise a wry smile).

All in all, Device 6 really is an experience that anyone with even a passing interest in unique storytelling and “out-there” games owes it to themselves to check out. The impressive array of techniques that developers Simogo utilize to transform a basic textual tale in something that becomes so much more than the sum of its parts is nothing short of amazing. Yes, at times the puzzles can become frustrating because of their stubborn insistence on remaining ambiguous, but dealing with that is a small price to pay when the rest of the ride is so damn enjoyable. And so without question, Device 6 will be one of the weirder gaming experiences you’ve had in a while, but we could all do with a little weird in our lives every now and then…

This review is based upon a downloaded retail copy of Device 6 for iOS devices (iPhone, iPad and iPod Touch). Developed and distributed by Simogo.