2D platformers have been making a comeback in recent years and it hasn’t gone unnoticed. The Adventures of Pip takes a very unique concept about pixel resolution, something that is very important to video games, and introduces it into its narrative and gameplay. This makes for a cute platformer, but one that ultimately doesn’t really reach the resolution it was looking for.

The Adventures of Pip is about a kingdom divided into classes based on pixel resolution. There are some characters that are one pixel (just a block), a few pixels making a figure, and some with a higher resolution that look like they could be a character in a modern platformer. 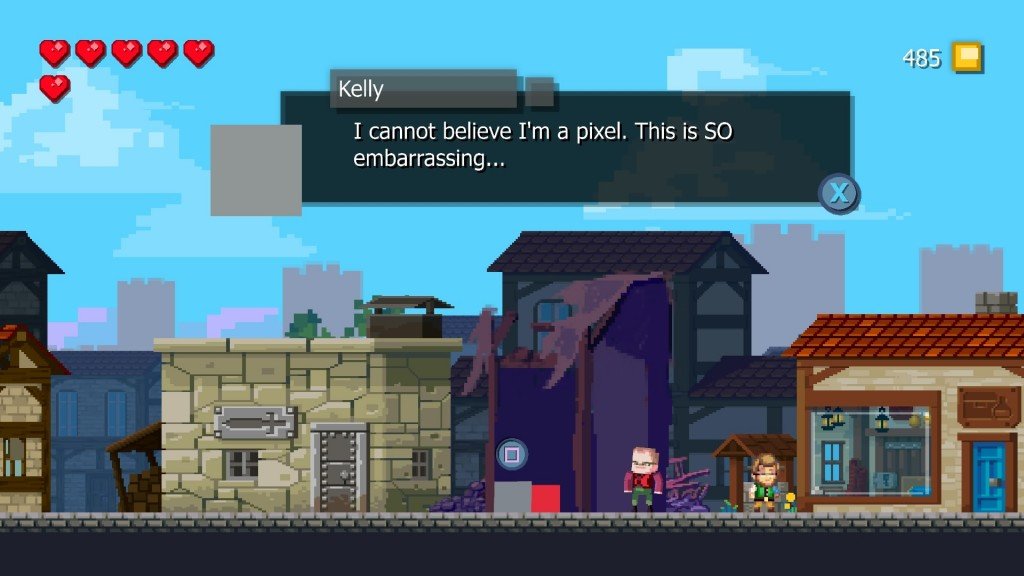 You play as a Pip, a one pixel character that is on the bottom of the social ladder. The evil Queen DeRezzia captures the young princess, who also happens to have excess to the bitstream, and can change the pixels around her. Naturally, you must rescue her. Sounds cliché enough, but there are some slight twists. The best example, you aren’t asked to rescue her. You are constantly told you aren’t good enough or what a hero looks like. Even the King – who you think is about to ask you to save his daughter – begs you to find someone else who is more capable than you.

It’s a neat touch on what’s overall still a cliché story. Adventures of Pip makes fun of itself at every turn. You can’t call a game cliché if it knows it’s cliché and makes fun of itself…right? It’s a basic story you know about rescuing a princess, but the dialog can earn a few chuckles. Someone shouting out “plot twist” when a very obvious plot twist occurs and the evil queen monologues an evil plan only to say something like “oh, that does sound really bad now that I say it” makes the game light hearted. It also points out its own jokes too often, almost afraid someone will miss it. Explaining a joke after telling it ruins the joke, and it would’ve been far better to let these little quips go without the explanation afterwards as to why it’s funny. 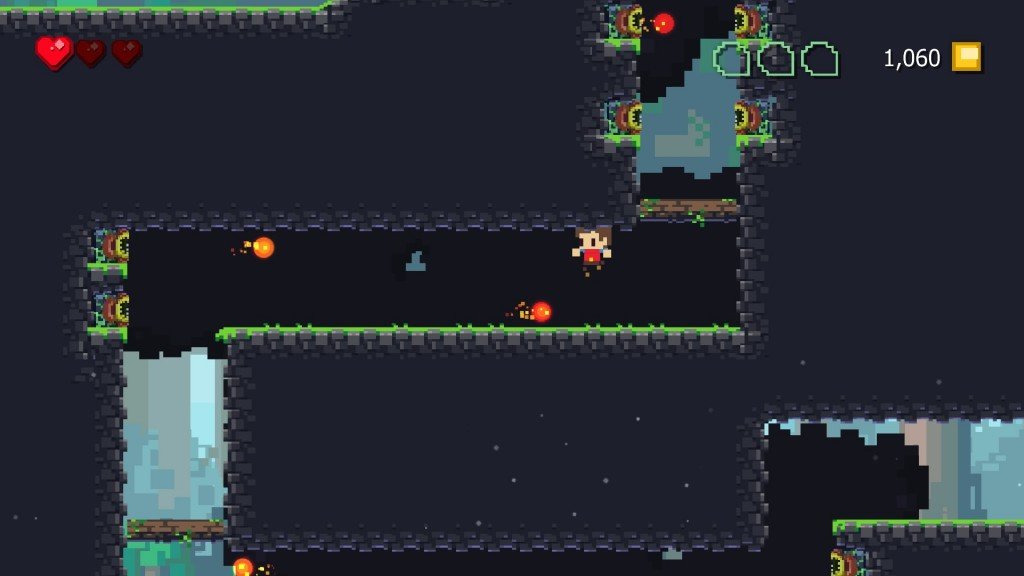 The gameplay is extremely basic when it comes to platforms and you can pick up the controls almost immediately. The one twist is you can change your pixel resolution and in those three different forms you’ll have various abilities. Being one block let’s you glide in the air longer, being a figure allows you to wall jump and move quickly, and being a fully drawn characters equips you with a sword, but you’re heavy and slow.

This makes the opening a little slow until you unlock all your forms, but then Adventures of Pip starts to move. The one catch is you can only choose when you want to decrease your resolution. You need to destroy a certain enemy to scale upwards. This can make for some interesting moments when you’re stuck in the wrong form and need to find the right enemy.

I was hoping this would allow for some agency for the player to decide what form they wanted to tackle a part of the level, but a majority of the time you are forced into the proper form. That’s not necessarily bad, but it takes away any creativity in solving puzzles. You enter a room in one form and see the enemy that will upgrade you; you immediately know you have to hit them to continue onward to pass the puzzle. 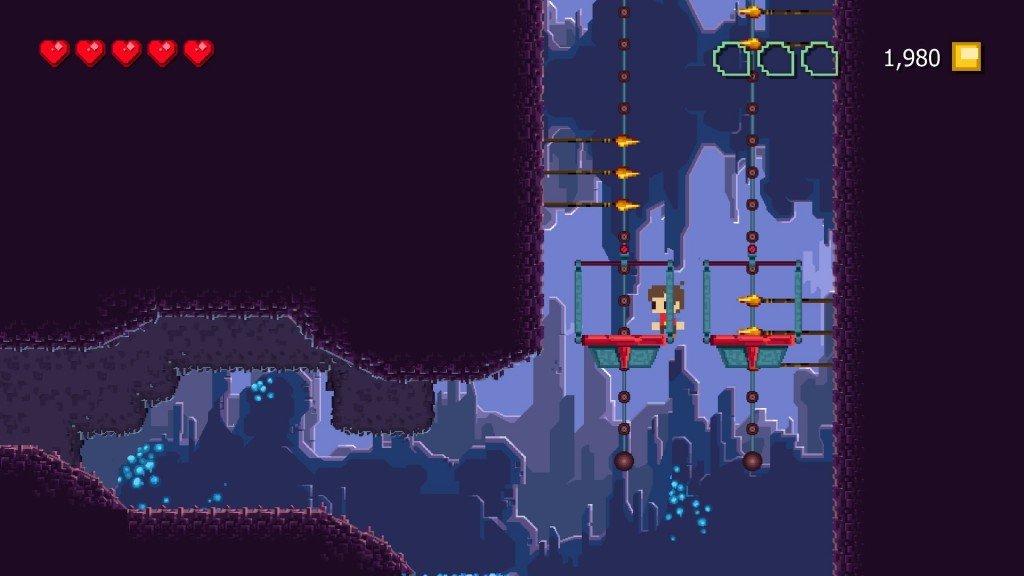 The puzzles never stumped me for more than a few seconds and the level design was fairly simplistic in terms of difficulty. Adventures of Pip is a very simple and easy platformer. There were some tougher moments, but only for a minute or two before I was able to move on. Running through the levels quickly feels as great as any platformer at least, but I never felt satisfied after getting past a certain level. The challenge just wasn’t there.

The only time Adventures of Pip really shined for me was in the last world. The challenge increased and you had to switch between forms quickly or you’d perish. It was the only time I felt accomplished after getting through a level and like the game was making me try. They aren’t the best platformer levels out there, but they showed the potential that Adventures of Pip could achieve. I only wish the entire game was like the end.

Adventures of Pip mixes up the standard platformer by adding in some basic RPG elements. Very basic. There are two stores that will open as your progress selling you some gear. You can have potions to restore your heart or an item that will decrease your damage by half. You can pay for these items by finding money in chests throughout the levels or destroying enemies. You are never forced to get a certain item and it’s all extra, but it’s a nice touch to have something else to work towards instead of the end of a level. 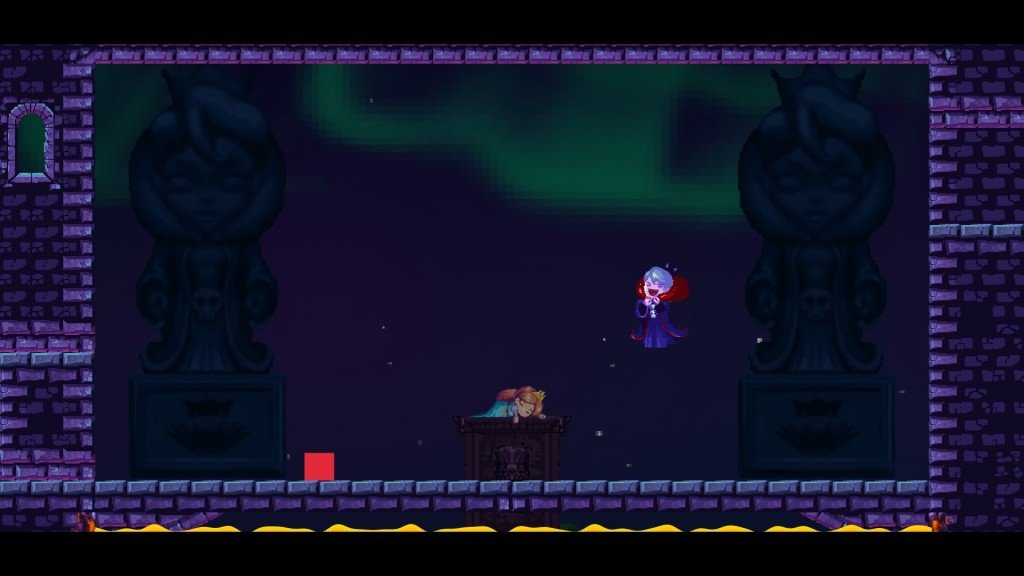 Sadly, Adventures of Pip never really entertained me. It’s not a bad game in the sense I hated playing it or thought it was poorly made. It’s clever and cute, but doesn’t do anything too special. It hits all the bullet points you need in a platformer and even adds its own originally gameplay concept to be unique, but it still felt too basic for it to stay in my mind for long. It’s an okay game that you may get some fun out of, but it isn’t anything to compete with your beloved platformers.

This review is based on a review code of the Playstation 4 version of Adventures of Pip developed and published by Tic Toc Games.

Did you like this? Share it:
A Generic and Forgetful Journey | Adventures of Pip Review
Overall Score7
Positives
Negatives
7Overall Score
Reader Rating: (0 Votes)
0.0