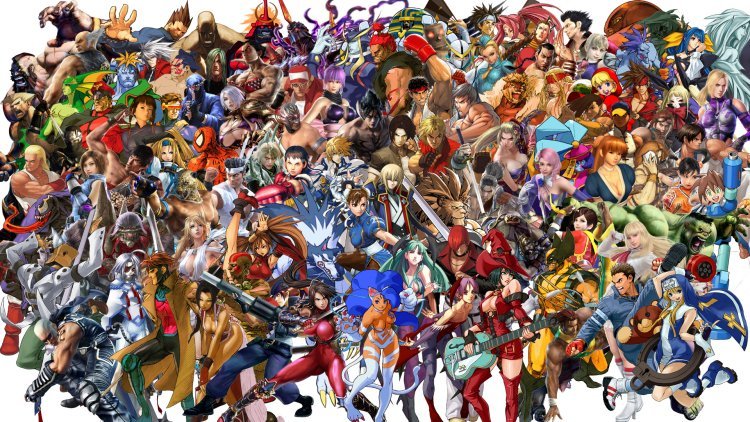 If you’re a fighting game fan, you know we have it pretty good right now. Fighters released today are innovative on their own but still borrow so much from the past. If you’re like me, then you found it extremely gratifying that Killer Instinct was a big deal on the XBOX One launch title list! Things weren’t like this, even when original XBOX came out. It’s no secret Capcom gave us the formula with Street Fighter II back in the day. High end players still bend the rules in taking every frame advantage possible and display it in videos and tournaments. It’s up to us to keep the ball moving.

But where did all this momentum build from?

And it all starts here: Every Street Fighter II (1991)

There were many 16-bit fighters, however, there was only one Street Fighter. The game was so dominant that a huge disparity was created for a long time. There were several 16-bit Street Fighter variations in the arcade cabinets (due to remakes and expansion versions), several console versions, and we can’t forget the beloved pirated Rainbow ROMs. There were some fighting games that would come close in that era, though they were few and far in between. Capcom seemingly knew what they were doing as they played the Pied Piper of the genre. Competitors like Midway and SNK, eventually caught on to what Capcom was doing and tried to eat some of that success pie. Before the days of SFII, the genre was not the one-on-one affair we are now used to, as games like Final Fight and Double Dragon had been lumped in for their hand-on-hand combat styles and action oriented stimuli, and games like Street Fighter (the original) were all but urban legend.

I could go on for days and days about how it changed gaming forever, the specific growth of the franchise, and technical expectations it put on gamers, but I’ll couch that for another day. The same couching goes for the two beautiful series’s proceeding SFII (Street Fighter Alpha & Street Fighter III) as the game grew into the great game Street Fighter IV is today. To sum it up, Street Fighter II set the stage for what every game fighting game now expects to be, but is it the most influential? I would say so.

A Fatal mistake would be to ignore the contributions of Boon and Tobias. It seemed at first, Mortal Kombat would just be a controversial flash-in-the-pan. You had real-life graphics, violent depictions of people fighting, and a sense of gore and brutality that had not yet been realized up that point. Add a touch of Street Fighter mechanics, and infuse the most gruesome ways to dispose of your opponents, via fatalities, and now you have something that really garnered some attention, while simultaneously pissing off parents. Won’t somebody think of the children! This franchise became so big it even made the big chief in the east, Capcom, submit their own fighting game to attract MK fans away in their offering of Street Fighter: The Movie. Mortal Kombat took over the world, boom, bang, the world.

However, it would not have been a commercial success without its solid follow-up to the original tournament. I’m not talking about the movie either (another thing MK battled SFII at). Mortal Kombat II enhanced an already great fighting system, added some “accidental” code, hidden content, gore, and interesting story that expands the original to another level making the sequel a neatly polished product. MKII was the game that showed people the attention to this new franchise was well deserved, and was the springboard to where the tournament was headed. The game was just overall solid as the engine was being perfected while growing the roster to bring more of their lore into reality. The new Mortal Kombat and Injustice:Gods Among Us owes every ounce of worth to the past.

Viruta Fighter’s intent was to knock you out cold or knock you out of the ring. Of course, a rundown of 3D fighting ain’t a list without Tekken and all their versions, variations, and sequels; but there is something to be said for being the first. Spacing is always the utmost importance in fighting games but being in the corner never meant an automatic loss. Virtua Fighter was the first major fighting game where your actual environment played a vital role because you could fall right out of the ring.

As more fighters were developed to use better advantage of the environmental space, the elevated tech found itself raising the stakes beyond Sega’s Virtua Fighter. Be it the plane shifting Battle Arena Toshinden, realistic swordplay of Bushido Blade, beastly ambitions of Bloody Roar, deadly stage transitions of Dead or Alive, bobbing and weaving of Ready to Rumble, or Capcom’s Rival Schools and Street Fighter EX Plus Alpha. It’s pretty amazing Sega predated so many other Z-axis based brawlers, despite the fact that fighting in a 3D ring was so inevitable. Sega also made it a credible franchise that still thrives today.

Sometimes it is easy to see the big boys operate and you can assign a region to where the target demo is. Capcom was able to be a worldwide brand, Midway was mostly a western staple, while SNK had a majority of its focus in the east (SF2 announcer: Japan!). Us stateside commoners were given access to SNK’s fruits of labor, but usually at a commodity of rarity and price or both. The Neo Geo home console wasn’t cheap, it was however the truest way to play your arcade games at home. Where is this all going? Well, SNK had a lot of fighting game titles, where the Fatal Fury and Samurai Showdown franchises were there biggest name amongst the group, but none really stood on its own as being great. That and people usually played the SNK games while waiting their turn at Street Fighter. Ha!

SNK wasn’t done yet. They essentially said, “Screw it. Let’s just make a game with everyone in it.” They did just that and we are all better for it. How awesome is that? You take character sprites from the Art of Fighting, Fatal Fury, Ikari Warriors, and more games, add new protagonist (Kyo) and deadly antagonist (Rugal), and now you got yourself a game. This feat took on the ambitious endeavor of keeping the former characters in the truest states possible when ported from previous games all the while bringing big roster battles and even DREAM battles to light. Capcom tried doing this with Capcom Fighting Evolution and found out that it just isn’t that easy to do.

There’s nothing more Uncanny than a tremendous crossover uniting separate universes. Our fascination was satisfied back in the old days of X-Men: Children Of The Atom. COTA used comic book visuals, Street Fighter moves, Darkstalker free connecting combos, and little help from a secret Akuma appearance. No true sequel was to be made, though, sprites and mechanics were to be imported to Marvel Super Heroes. The heavy hit wasn’t struck until the ante was raised tagging Capcom legends with Marvel heroes, which found its way to many incarnations.

Tagging is the key word here. The idea of X-Men vs Street Fighter was to pick two characters at a time, which you could switch mid-battle at any time, turned the feature into a phenomenon. Almost every current fighting game title has tinkered with the idea from Tekken Tag Tournament, Skullgirls, SNK Battle Coliseum, and so on. It didn’t matter which game it was, King of Fighters XI tried it and Street Fighter incorporated it in Street Fighter EX3. Even though the tag system was experimented with and included in seemingly all fighters after it; much like a multiplayer mode was tacked on to every 3rd person adventure and shooting game last year (Tomb Raider and Mass Effect 3, for reals?). This became a popular trend in the fighting genre, but nothing could equal the beast X-Men vs Street Fighter would culminate.

Where to start? First off, Marvel vs Capcom 2 had 56 playable characters. Are you freaking kidding me?!? You mean Capcom stripped every sprite based game and just slapped them all together in one title, de-dimensionalized Hayato, and added a cactus, a female pirate, a monkey, a rando X-Man lady, an unplayable alien boss thing, and called it a day? Yes. Three person teams? YES! It was the ultimate love child between Capcom and Marvel, it just felt so right and natural. Marvel vs Capcom 2 was awesome, epic, hype in theory and quickly became an instant classic.

Ironically, MvC2 stayed essentially the same game that was released initially without much in updates throughout the years of its existence. Marvel vs Capcom 2, ahem…excuse me, Mahvel vs Capcom 2 was never technically the best fighting game of its generation (I can close my eyes and hear Capcom vs SNK 2 and Street Fighter III:Third Strike muttered under people’s collective breath), it is treated as such. I am not saying this as a slight; rather it is great with forgivable flaws like a fairly unbalanced roster, abused gameplay to nearly broken levels, and famous glitches galore (goodbye, Gambit). The way Versus games were being produced, you thought the next Marvel game would wrap characters all the way around the character select globe. However, after this hurrah of releases pretty much a drought dizzied gamers faster than an instant-overhead and fighting fans were cut out. Just. Like. That.

Other fighters of Marvel vs Capcom 2’s time frame and ilk were fantastic and popular but nothing to the affect of Mahvel. Websites like Shoryuken.com and iplaywinner.com, players like Justin Wong and Yipes, and tournaments like EVO gathered all the ingredients with MvC2 being the centerpiece. It’s the most vital because it carried the fighting scene from arcades in the malls, through the dark times of no arcades, to the period of now. Capcom seized the opportunity during this hype build-up to revive their staple fighting game franchise (Street Fighter IV) bringing back classic fighting styles with a newly overhauled outlook. The fighting game scene hasn’t looked back since.

All of this resulted in a resurgence, a renaissance if you will, for a once dying breed. I am talking about the new Mortal Kombat, Injustice:GAU, KOF XIII, Soul Calibur V, Street Fighter Cross Tekken, and at least ten others since. On top of that, improved netcode for online play has done wonders in giving players the opportunity to shine the way it was for years: turning living rooms into mini-arcades again. You get the same amount of shit talking with less time waiting your turn, though, you do have to trade it in for buttholes who rage quit every once in a while (sigh, you can’t have it all, I guess). Now, we are hot on the heels of the Ultra Street Fighter IV edition to be released summer ’14.

Even Ultimate Marvel vs Capcom 3 is damn good however nothing can replace a classic nor can it fill the shoes of its legacy. Marvel vs Capcom 2 has been the most important fighting game of its short history by being the gateway to the present. It connected gamers like combos, spanning worldwide like it was first contact to people like yourself all over again. This new age of separated locales revived a decaying sect into the strong grass roots movement it is today. I’m happy to see fighting games take some of that spotlight again.

Now, if we can get a damn Mega Man game already……