Every Sunday there is a checklist for the hardcore NFL football fan.

You gotta have your NFL jersey on, a device to incessantly get updates on your fantasy team, cold drinks in the fridge, hot wings on the plate, and fresh pizza at the door. We get Monday and Thursday nights too but nothing comes close to our Sundays. Does it matter that the broadcast networks have hardwired us to the sofa like sheep for the slaughter?

Not at all. Our preprogrammed sequence of football lust is so ingrained that we will buy what seems to be the same NFL sim every year. We all know the roster changes with the number next to the iconic name, but there’s sometimes a thought that creeps up in the noggin saying, “Ummm…this isn’t worth $60.” It’s like how we expect to hear bold predictions from our favorite teams; however, not every owner can promise a Super Bowl championship. Think Rex Ryan.

On the other hand, some teams show a promising off-season offering and look to deliver strong and reward the fans for their loyalty. My dude, I hope my 49ers end the season with a ring. As for Madden 25, the 25th anniversary of the franchise’s inception, this disc belongs in the HOF discussion. It’s one of the best Madden games ever made as it feels like a culmination of what makes the series great while giving the formula the right amount of twist. It’s a must have for Madden fans and should deserve a strong consideration from the football loving public interested in gaming.

I am no stranger to the series and I will tell if this was a rehash from a previous year’s iteration. Shoot, you can argue Madden has such a track record of going Dr. Frankenstein all over its game from the way features pop-up, disappear, reappear, and then never come back again. And every year we Madden lovers are out there with our hands out waiting for our favorite features to return, and then lament the fundamental changes to an already solid game. Why change for the sake of changing?

Madden 25 masterfully adds a refined running system called the “Run Free” engine. When you have the ball, you have the control to do most anything without hitting unnecessary buttons. You hold onto the Left Trigger then hit corresponding buttons to spin, juke, jump, truck, and dive. Your Right Trigger is your trusty turbo button. And if you feel like you’re losing your balance then make sure to move the Right Stick to place your hand in the dirt and remain upright.

It does this while incorporating the familiar on-field pre and post-snap inputs/options fitting play styles like a glove. The mechanics are solid and what you should expect from a football game released by EA SPORTS. This alone is NOT the reason why this is THE ONE to own. Look to the gameplay as the meat. The tasty spiciness that keeps you interested in your food is usually best complimented by its bread. The bread of our meal is found in the different modes encompassing its rock solid gameplay.

If Madden 25 was a sandwich, it would be a New York deli style pastrami sandwich with about 12 layers of meat and bread. You know those ones you see in the window as you walk up Manhattan. It’s that foot and a half tall beast luring curious tourists, entrancing gluttons, and disgusting vegetarians alike. Get Hungry! That insatiable urge to keep playing might be why Snickers sponsors so many spots inside the menus.

I’m getting off track but this game is completely about the modes complimenting the fun on-field enjoyment. Of course, you get your standard 1 v 1 and also newer 3 v 3 matches. Madden Ultimate Team (MUT) returns making it now a regular feature. The tutorial is the best of my memory since I really started playing the franchise seriously in 2004. Madden Moments make a wonderful return. Finally, the franchise modes are of the deepest ilk available as it brings back favorite features while adding more depth and a bunch of new wrinkles. The best part is that you can take all of these modes to the online gamer-space if you so choose to use.

Instead of detailing a piece by piece featurette of each mode with deep insight and acute sensitivity of it’s options; why don’t I paraphrase it as elite. I’ll just rundown their dope qualities highlighted with a couple of quick taglines, John Madden style. BOOM!

1 v 1: The most competitive feature of any Madden game. Online or offline, you’re not going want to look at the clock on the wall because the one on the screen is that more important. BOOM!

MUT: Expanded to the point of relevance where it’s actually a blast to develop rosters and go through its game mode. Plus, it’s waaay more fun to play online. BAM!

Madden Moments: You get 5 of the biggest moments in the NFL from last season to be replayed by you. As the 2013-14 season progresses, the moments will be added to fulfill destiny or change the course of recent history. TOUGH ACTIN’ TENACTIN!

Tutorial: Some years this is an absolute joke. Other years it’s tucked away and hidden in separate modes like Training Camp or mini-games. The makers finally get it right and do a great job of teaching the nuances to accelerate the deep learning curve. BRETT FAVRE!

The Franchise Mode deserves extra attention as it is the strongest component of Madden 25. The options are so deep and particular that the possibilities are endless. You can choose to play as Player, Coach, and Owner. You can import your face to from the EA Origin website (selfie time y’all) to make the face finally match the identity. Each created persona classifies into sub-categories to give your franchise a distinct personal history, style of person, and a bunch of extras like interviews, pricing, and off-season decisions giving you the player all onus. These are some of the options that mysteriously disappeared in previous Madden’s making a triumphant comeback.

Even better you can take the action online too. Want friends and/or random players join you in a league? How about joining someone else’s league? You can give them the power of your commish-hood or make them responsible for only a fraction of the available options. The key is to progress through all facets of the season alone and with a buddy or two to truly compete or join forces to win the coveted championship ring.

The last greatest feature: Connected Franchise. This allows you run as the Player, Coach, and Owner simultaneously allowing you flip through the different personas in the same season. Do it all and really get your feel. I love how meaty the Franchise Mode is. In a bread sort of way, of course (refer to deli up).

Madden 25 entertains the remaining NFL loving senses by improving the presentation of the games by giving it a television like product. Phil Simms headlines the broadcast booth as he and Jim Nantz start like a CBS game filming them inside of the booth. You also have sideline reporter, Danielle Bellini, adding depth and texture to your ears as a third voice is a welcome addition giving a true TV experience.

Now, two extra teams are added to roster on top of the regular, and constantly updated, 32 team rosters. The first is the Canton Greatests, where as you may imagine, consists of Hall of Fame players found in the walls of Canton, Ohio. You name it and they most like have them available. Ditka. Sammy Baugh. Ditka. Franco Harris. Ditka. You have them all at your fingertips.

My favorite addition to this year’s title is the other squad, the Madden 25 team. Ahhh, it’s so perfect because it is not made of the best football players necessarily, the roster is built of the BEST Madden characters from Madden’s past. 2004 Mike Vick paired with Brian Finneran! (I know, I chuckled in excitement too) 2003 Kurt Warner! 2000 Barry Sanders! Randy Moss in any Madden! Awesome, AMIRITE!?! The roster is so big for the Madden 25 team that you can do a one-on-one Madden 25 match-up and switch around the depth chart in seemingly infinite combinations.

The only things I missed from previous Madden game’s are the Team Creation option where you make a team from scratch, and the other abandoning its connectivity to any fantasy football teams you may have. I am also not a huge fan of the MUT deceptive dependency to paying for player packs using more of your hard earned cash for the highest rated card packs. I’m sure there might be more things to mention but my 49ers are the best rated team (finally!?!) and I am willing to forgive minor transgressions.

Dag, almost forgot to mention the smooth menu HUB interface reminiscent of XBOX LIVE. I didn’t even talk about the playbook options. You can make your own playbook that you can create then post online to be used. If you’re playbook becomes the most widely used then you are eligible for prizes. I also forgot about practice mode too. The MUT Hall of Fame players you earn. The personalized touchdown celebrations. The list just piles on and on and on and on…..

Madden 25 is so jam packed that you could focus exclusively on only one of its numerous modes and still feel satisfied spending that $60. Without a doubt, this one is for the ages and should be purchased. Do not mosey past Madden 25 if you’re a football fan, and especially if you are a jaded Madden player like myself.

Meh, skip next year’s Madden instead. I know I will. 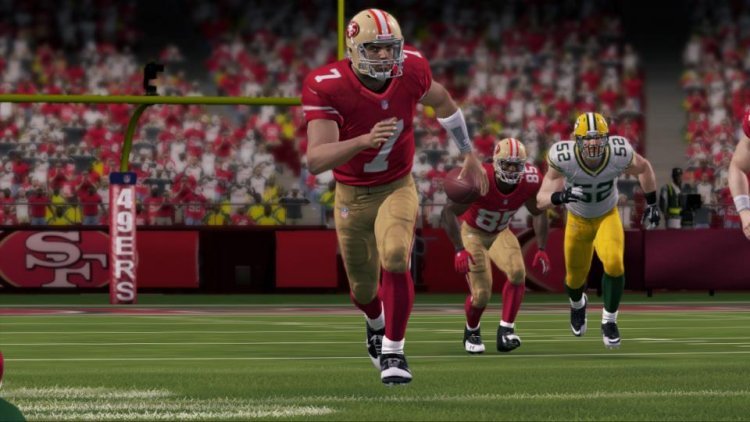 This review is based on a retail copy of the Xbox 360 version of Madden 25 developed by EA Tiburon published by EA Sports. New Gamer Nation received a review copy of this game.

Rating:
9.5
Strengths
+Extremely Deep
+Rich Gameplay Modes
Faults
-Spend Extra $$ For MUT
What would you say?
Average: 10 (1 votes)
Your vote has been submitted
Did you like this? Share it: