Shadows of the Damned follows the adventures of Garcia Hotspur, a Mexican demon-hunter whose girlfriend has been kidnapped and dragged to hell. It is up to you to find your true love while fighting everything that crosses your path. This is no easy task, seeing as there are hordes of demons just waiting to kill you in the darkness. Luckily, Garcia is armed with his own bag of tricks to deal with anything hell can throw at him.

Shadows of the Damned features an incredibly stylish and fleshed-out world. No matter what negatives this game may possess, 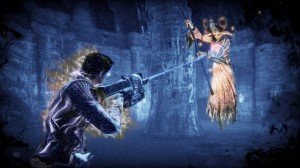 they are far outclassed by the game’s incredibly interesting and quirky world. There are plenty of details that you stumble upon that add a lot of flavor to the story. In particular, the story books found around the levels give you some backstory to the bosses you are about to fight, and are enjoyable to listen to. Sure, this is a small thing, but the way the books are narrated and the cartoon-like graphics explaining the gory details of the demon looming ahead of you compel you to venture that much further into the depths of hell. Gamers will appreciate this level of detail and storytelling. Luckily for everyone, Shadows of the Damned is a better game because of it.

The gameplay is nothing new but it is done in a way that makes playing the game fun and interesting.  You can expect the game to control like any standard, over-the-shoulder third-person shooter would. The controls are quick and responsive: you can jump and strafe with ease, and shooting feels great. There is some light puzzle-solving involved but nothing that is going to wrack your brain.

This game does manage to mix up the genre from time to time. The first and most noticeable gameplay element change is the darkness. The darkness is all around you in Shadows of the Damned, and the only way to travel safely in the dark is to have a light source nearby. If you stay in the darkness too long, your health begins to drain and will do so until you return to the 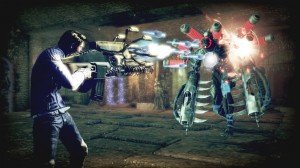 light. These light sources are mounted goat heads that sit idly on the wall. You have to shoot these heads with your secondary fire to illuminate them. From then on, you can move easily to the next light source. This element of making sure the goat heads are illuminated adds an element of panic as you try to vanquish the hordes of demons coming at you while making sure the darkness is kept at bay.

The other gameplay element really isn’t a gameplay element at all but more a supplement to the atmosphere of the game. There is a sense of humor woven throughout the game which is a stark contrast to the locatiosn you are playing in. Hell isn’t supposed to be light and funny, but somehow this game makes you feel like it is. One way this is accomplished it by Garcia’s commentary throughout the game. Often sarcastic and usually funny, importantly it helps keep the mood of the game from getting too stale or dreary. It also helps to preserve the grindhouse flavor that is so important to this game.

The sound design is excellent and it deserves accolades for that. The soundtrack ranges from guitar and metal-influenced tracks to soft and atmospheric electronica. The mix of fast and slow music creates moments of great tension, especially when the fast tracks do not always coincide with the battle sequences. Throughout the game you’ll find that 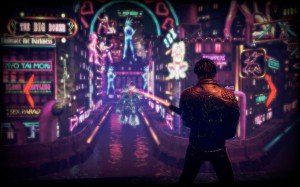 the music sets the mood for the rest of the game by itself. When you add the art direction to the mix, the game provides a beautiful and rich setting.

What makes Shadows of the Damned a great game is that you never know what is going to happen next. The game does a wonderful job of mixing up environments, puzzles and enemies to provide the gamer with a unique and fun experience. When you combine these elements with superior sound design and a dark and interesting sense of humor, you get one of the better games released this year.  You should make sure that you get your hands on a copy of this game, as if you give it a chance, you’ll be pleasantly surprised. The only drawback is the lack of a New Game+ feature, where you would take your upgraded weapons with you to a new game. This really hurts its replay value, but as far as you should be concerned that is just a small gripe against an otherwise awesome game. A highly recommended game for any gamer, especially those interested in third-person shooters.