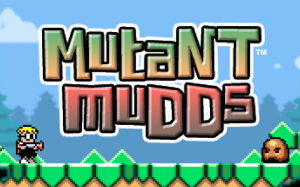 The hottest and flashiest new video game experiences have generally been the domain of the home consoles, but that didn’t stop Nintendo from creating a few standout classic platformers for their portable business. The Game Boy and Game Boy Color offered many platforming classics that could rival the console gems. Games like Kirby’s Dream Land, Super Mario Land 2: 6 Golden Coins and Wario Land 2 are still terrific today, and the introduction of the 3DS Virtual Console proves that Nintendo nostalgia doesn’t just apply to the NES and SNES. It makes sense why Renegade Kid decided to tap into this wave of 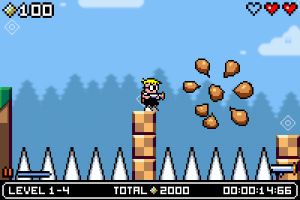 nostalgia when they prepped a new game, an indie title designed for the shiny new 3DS. The resulting game was the hardcore, colorful platformer Mutant Mudds, which was then ported to the PC for those of us yet to surf into the 3D future. But on a platform with plenty of indie platformers available, how does Mutant Mudds hold up on its new home? The answer, unfortunately, is mixed.

It helps to begin with what is easily the strongest asset to Mutant Mudds, which is the overall presentation. With a nod to those aforementioned portable classics, Mutant Mudds sticks to a pixelated, low resolution look that caters to the hardware limitations of yore. Despite these self imposed limitations, Renegade Kid creates wonderful looking sprites and a lovingly detailed palette that wouldn’t look out of place in a first-party Nintendo release. The only modernized graphic moment is the main gimmick of jumping towards and away from the screen, refocusing on a different depth of the level based on your distance. The effect is still nifty, even without the 3D illusion.  Enemies are detailed and animated, the environment is colorful and packed with variety, and it’s all complimented by a truly terrific soundtrack. It probably wouldn’t surprise you to find out that the game uses chiptunes, and the era-appropriate music really lends the game a shade of authenticity and quality that is too often ignored in retro throwbacks. And much like the classics, the story is virtually non-existent, with just a few adorably lo-fi cutscenes setting up the premise of the Mudd invasion.

The gameplay is largely authentic as well, but in an altogether more polarizing fashion. Mutant Mudds is a basic platformer through your typical sequence of grass worlds, ice worlds, and lava worlds, but it throws in a somewhat unique twist in the form of your jetpack.

As mentioned, you can pop between the main level, the background, and the foreground, while also using your limited ability to hover to navigate danger and collect all the shiny diamonds, secret doors, and the end of level MacGuffins. It mostly follows this straightforward model, but unfortunately, it often turns into a very frustrating experience. The game goes for a traditionally Nintendo difficulty curve, making many levels extraordinarily hard, but with one vital component missing. Every Mario game, from the NES to the Wii, made sure to temper potential frustration by rewarding the player, whether it was with mid-level checkpoints or a much needed mushroom after a difficult segment. Other indie platformers like N+ and Super Meat Boy made sure the levels were short enough to counter the crushing difficulty, so restarting was as painless as possible. Mutant Mudds, while certainly less challenging than those two, but still harder than any Mariotitle, makes no such attempts to meet the player halfway. What doesn’t help is the level design, which looks great thanks to the art, but physically doesn’t work so well. The levels are blandly forgettable most of the time, and the most memorable segments are generally due to frustration. Things like instant death spikes, unforgiving jumps, and tricky platforming segments covered in baddies are hard, but fit with the challenging theme. But scrappy, controller shattering mechanics include things like hidden off-screen spikes, asinine enemy placement that is typically impossible to dodge, tight corridors that require firing your jetpack with pixel perfection, and the worst platforming sin of all: ice platforms. A platform that gives you bad controls is not, and should never be, considered a fun mechanic.

Speaking of bad controls, Mutant Mudds has its fair share of faults on that front. The first problems are peripheral related, particularly if you plug in a controller. One of the gimmicks of the game is that it won’t allow you to use an analogue stick, instead forcing the use of the D-pad. This is all fine, except the only controller supported by default is the Xbox 360 controller, i.e. the worst D-pad on the market. The main 360 controller issue is that pressing left and right often trigger the up button as well, which continuously causes you to activate platforms and enter doors unintentionally. 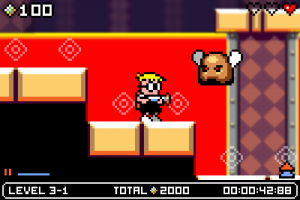 Eventually, I had to switch to the keyboard once I got a power-up that frequently and inadvertently activated by pressing up and A. Fortunately, the keyboard is a perfectly viable way to play the game, but the actual control design itself causes additional problems as the character moves so slowly compared to the rest of the game’s pace. Disappearing platforms blink in and out in a second, bomb dropping enemies explode after half a second, your jetpack fuel drains in about three seconds, yet your character is one of the slowest protagonists in modern platforming. It’s essentially the Mega Man model of game design, so fans of that series would feel at home and know what to expect. Does it make for a fun platformer? That’s mostly up to personal taste, but it’s certainly not for everyone.

Final Verdict: Mutant Mudds is certainly not a bad game. It’s charming and has a few moments of fun, and with twenty basic levels, twenty secret levels based on retro Nintendo portable consoles (including the Virtual Boy), and twenty PC exclusive “grannie” levels that kit you out with all sorts of power-ups, it’s a fair amount of content, so you certainly get your money’s worth. The main issue is that often, the game becomes far more frustrating than fun, and there are lots of other indie platformers out there that you could pick up instead. The game just never really rises above charming nostalgia tempered with general mediocrity and occasional rage. This is one for the most masochistic of retro fans.

This review is based on a review copy of the GOG PC version of Mutant Mudds provided by Renegade Kid.

Special thanks to GOG.com for providing the review copy. You can buy Mutant Mudds DRM free and with bonus goodies (including the soundtrack) at GOG.com.