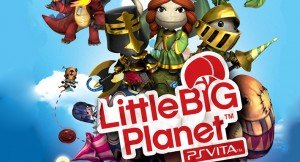 So, has Sony dragged Media Molecule‘s creation on for too long and onto the route of endless sequels and franchise stagnation? Is LBP PS Vita something best avoided? Thankfully, no, not at all. The “Play. Create. Share.” philosophy is very much alive and kicking thanks to the latest entry in the series, and in many ways, this is one of the finest games to task players with doing just that.

LBP PS Vita offers a disappointingly short campaign – it’s possible to complete it in a single sitting, if you don’t have too much else to do – but even within this section of the title, there’s a surprising array of gameplay styles within the campaign. At it’s core, LittleBigPlanet is a platformer, and there’s plenty of that genre on offer here; but there are also puzzle games involving the Vita’s touch-screen, as well 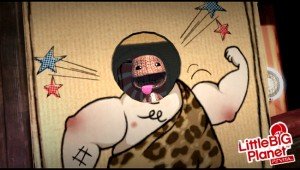 as racing levels that are a bit odd, but also highly enjoyable.

The Puppeteer (which has nothing to do with the upcoming Japan Studio title of the same name) is stealing joy from the residents of Carnivalia in LittleBigPlanet, and your Sackperson is enlisted to help thwart this nefarious scheme. The campaign takes you to six differently themed worlds and has gamers encounter a quirky cast with a humor that series veterans will be well familiar with.

As with each of the games in the series, LittleBigPlanet PS Vita has a distinct art style brought to life by the Vita‘s OLED screen, with the increased resolution comparing particularly favorably with LBP on PSP. There is, most definitely, a distinct polish to the title you’ll appreciate. Similarly, the soundtrack is an excellent addition to the game, nicely complimented by Crystal Castles’ compositions midway through.

One of the criticisms of the LittleBigPlanet games – particularly the latter ones – is that the complicated physics sometimes involved in building your own levels can be confusing and even off-putting, at least initially. Yet in order to truly appreciate LittleBigPlanet, you eventually have to tinker around and see what you can do.

As with LBP 2, this version allows you to create any type of level you might ever want to, complete with mini-games and cut scenes. 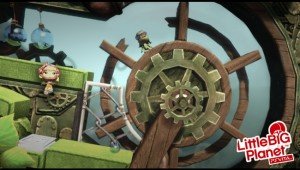 The level creation system is as easy or as complicated as you want it to be, and while it’s unwise to plunge in without having some idea of what you’re doing, it’s really never been easier to create and upload your levels for others to enjoy. Stephen Fry returns to guide you through the tutorials and really, even if you are a bit rusty, it shouldn’t take too much prodding to get you into the swing of things.

The game places a significant focus on inertia when making your own levels, meaning that it can feel somewhat unresponsive for newcomers; however, as you work your way through the tutorials and your knowledge of the tools on offer expands, you’ll quickly overcome these obstacles. Sadly, the set-up maintains some of the more frustrating moments gamers experienced with LittleBigPlanet; especially irritating are the occasional problems which emerge with the grappling hook. Even though they should, perhaps, have been dealt with by this stage of the franchise, these problems are minor, and ultimately easy enough to overlook given everything that’s going on.

What’s less easy to forgive, however, is the fact that the touch mechanism isn’t quite as responsive as you might wish. Sometimes your Sackperson will meet an untimely demise because the screen didn’t register your finger strokes. While it never quite feels that Double Eleven and Tarsier Studios have unnecessarily stuck on the Vita’s various input methods, you feel that in this regard, at least, it should be held to a higher standard.

LittleBigPlanet PS Vita is arguably the best game on the system, and is definitely worth a look, even if you picked up the recent Sound Shapes (a title that allows you to create and share levels based around music). There have been a few gems on the Vita to date, but LittleBigPlanet’s first outing on the system is the jewel in the crown.

This review is based on a retail copy of the PlayStation Vita version of LittleBigPlanet PS Vita by Double Eleven distributed by Sony Computer Entertainment.