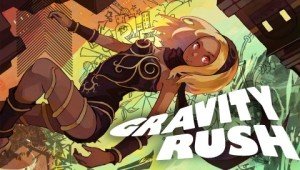 Gravity Rush, a brand-new, original game by SCE Japan for the Playstation Vita is out, and with it comes a gaming experience that utilizes the many features of the Vita. Gravity Rush puts you in the boots of a young heroine doing the best she can to save the people of the floating city of Hekseville, and throughout the course of the game, players are treated to a beautiful, open-world experience with a unique visual style. Gravity Rush has sparked the interest of a large audience since its 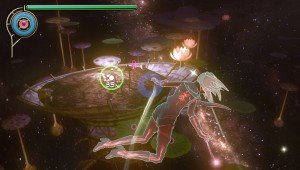 debut at E3 2011, where its sleek and interesting control mechanics were on center stage. The game quickly gained a following, but is this game the one that finally pushes people to purchase a Vita?

For the most part, it is certainly a worthy addition to any PS Vita owner’s library, though it does come with problems that prevent it from becoming the best it can be. Gravity Rush is an origin story for an interesting young character, Kat, who awakens with no memory of her life. She also finds a mysterious black cat who becomes her companion, and Kat soon realizes that she has acquired gravity-altering powers. She is initially an outcast to the people of Hekseville and is constantly being looked down upon and blamed for the recent attacks by mysterious creatures called the Nevi. She eventually becomes the savior of the city, but not before encountering her fair share of challenges and supporting characters. Initially, Kat is not very endearing, but soon you’ll come to find her a rather cute and interesting character. Through a well-told story and characterization, you’ll soon find yourself worrying about her, and it’s really interesting to see how she adapts to the world around her. The story unfolds through comic book panels with a 3D effect, and more interesting still is how you can manipulate the cut scenes by tilting the console. This works well and delivers the story in a new and interesting way. The story itself takes around 10 to 12 hours to complete depending on whether or not you complete the several side missions and challenges.

Unfortunately, the story does come to an abrupt end, but despite the ending, it still has moments that are engrossing and which somewhat make up for the shortcoming. You’ll appreciate this interesting tale, which will certainly hold your attention up until the very end.

The game is very visually appealing with its unique, anime-esque style which certainly conveys a beautiful presentation of the world and characters. The city of Hekseville is separated into three different sections or parts, and each of these offers its own individual style and feel. The town mixes elements from European architecture, steampunk machines and manga to deliver the impressive setting. The menus are seamless and easy to use, quickly allowing players to navigate them. Gravity Rush does come with a few graphical imperfections, specifically low-res textures, but it’s not enough to take away from the experience.

Perhaps the most intriguing part of Gravity Rush, especially at first glance, is the gameplay mechanics, as these take full advantage of the Vita’s gyroscope and touch functionality.

During the first 10 minutes of the game, players are introduced to these interesting controls and most will find them surprisingly easy to pick up. In fact, they are so easy that you’ll find yourself using the movement of the console itself rather than the joysticks, since the console’s gyroscope allows for better aiming. The developers over at SCE Japan have made combat simple and interactive, and controlling Kat through the use of her gravity-controlling powers is easy and very satisfying. When taking to the skies, there’s a sense of speed and agility that comes with Kat’s powers, and the game really makes you feel like you’re in control. The Nevi, the game’s primary enemies, are varied enough to give you a satisfying challenge. Their weak spots are orange glowing balls placed on their backs that require some maneuvering and timing to strike. Initially, you go up against simple grounded targets, but you will soon find yourself facing more challenging enemies that require you to shift your strategy to defeat them.

The game makes great use of these controls to make combat fun and exciting, but unfortunately, combat isn’t as good as it should be. The primary problem lies in the game’s handling of locking on to the weak points of the Nevi when going in for the attack. You will regularly find yourself flying with great speed, ready to deliver the final blow, when your character simply flies past instead, missing your desired target. It would be much easier to tolerate if it just happened once or twice, but after a large number of missed attempts, it really starts to get annoying. You’ll find there will be times that you’ll rely on your super attacks to 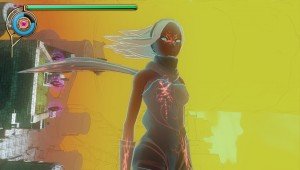 defeat a Nevi just so you can move on. Also, the game’s major bosses are too simple and easy to beat – there is far too little challenge, and the same strategies can be used against these bosses over and over again.

Scattered around the city are people to talk to, time challenges, and glowing purple gems that increase your power as you progress. The collecting of these purple gems is certainly addictive, and you may even find yourself quickly stopping yourself from fighting a boss to fly over to collect a nearby gem. Challenges are fun and well-designed, making you want to earn the reward at the end of the challenge. It’s a great way to spend time during missions, and the rewards are certainly worth the time you’ll invest in them.

So the original question remains: Is Gravity Rush the game that finally pushes you to get a Vita? Well, it is a great game, and  one that all Vita users must try. It offers a type of gameplay experience very rarely seen before, but it also has problems that stop it reaching its maximum potential. However, we feel that if you devote some time to get into the game, you’ll find a rich game-world that will grab you and provide you with an experience like no other on the Vita. Overall, we give this game our highest recommendation for the PS Vita.

This review is based on a retail copy of the Playstation Vita version of Gravity Rush by SCE Japan.