The sound that this headset produces is very good. The bass is strong in this set, but the highs are somewhat muted. This unbalanced setup doesn’t necessarily lend itself to listening to music, but for gaming, the problem is not as pronounced since most gaming effects utilize the bass heavily. You can tweak the settings to make it sound better than it did out of the box, but it still doesn’t completely solve the problem. The sound is also muddy 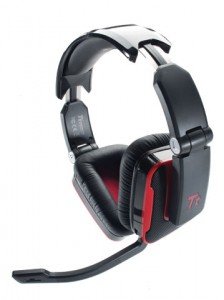 sounding if you decide to use the fake leather cushions since they absorb some of the sound. If you decide to use the cloth cushions, you will see an improvement in the quality of the sound. This places you in the unfortunate position of choosing between fashion or function. The sound is never inferior no matter what settings you use with this headset, but there are certainly areas to improve upon.

This headset is loaded with features that will make just about any PC gamer happy. There are 40mm drivers in the ear cups, just as you would expect from a headset like this. There is more than enough power here to give you the audio performance you’d expect from a quality headset. The headset is capable of producing a virtual Dolby DTS 5.1 surround sound. It sounds great, and this should more than suit most people’s needs. However, this set lacks a strong ability to play back sounds positionally, so anything more than left or right is going to be difficult. This is really unfortunate seeing as most new sets have the ability to playback sounds positionally and since it is all about the games, this feature is really utilized in gaming. The sound has the ability to be fine tuned using the software that comes with the headset. Simply choose the type of game you want to play, and the software does the rest. It is a nice feature that most headsets do not include.

Aesthetically, this headset looks and feels great. The plastic is thick, and it feels like a substantial product. There are red high-lights and the Tt logo glows on both ear cups. It is an attractive headset. However, there is just as much function built into this set. There is an inline audio controller that works great. From this controller, you can adjust the volume and mute the mic or the headset. The controller has a clip, so you can clip it to your clothing, so it will always be within reach. The headset also folds for easy storage, and it comes with a storage bag. This headset will easily fit in a desk drawer with plenty of room left over. It is one of the most compact sets we’ve had the pleasure of reviewing. Finally, the headset comes with the option of a fake leather ear cup cushion or material cushions, either of which is interchangeable. The cushions are easy to install no matter which feel you prefer.

The headset is a PC gaming headset and, therefore, requires a USB connection. The connector is gold plated which ensures a fast, solid connection. In addition to performance, it looks great. The USB plug is also over-sized which allows you to grip the end of the cord easier. It isn’t a major feature, but it is a nice little detail that makes a difference.

The mic boom is only adjustable in one direction, which is not unheard of but having a fully adjustable mic would have made a stronger impression. The boom itself is molded to the ear cup, so it folds flush against it. It is still 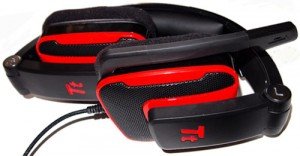 visible, but it looks better than most mics do folded. the mic itself is noise cancelled which reduces background noise. It works well, and it passed all tests we subjected it to.

Overall, this headset has plenty of mid-range options including replaceable cushions and a high-quality inline audio controller. If you are looking for a mid-range headset, the features on this headset are on-par with other sets in the price point and it performs well.

The Shock One headset retails for $109.99 which is at the low end of the mid range headset market. At this price point, a Dolby 7.1 surround feature should be expected, and since there is a discernible difference between virtual DTS 5.1 and virtual 7.1, the absence is felt. Also, the distinct lack of positional audio outside of left and right really hurts the value of this headset. With that being said, this headset does have plenty of options seen in the mid-range market. Things like the in-line audio controller, sleek design and swap-able ear cup cushions all contribute to a nice headset. However, this model does have some shortcomings, so better value may be found in other models.

This headset is extremely easy to use and very customizable. The software is easy to control, and you have plenty of options to choose from to make the set sound better than it did stock. There is only one plug, so installation 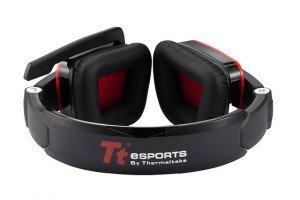 is a breeze, as well.

Comfort is a big deal when it comes to headsets. Luckily, this headset has a few options that make sure this headset stays comfortable no matter how long you are gaming. First, the ear cups have either a leather or cloth cushion so no matter what your preference, it should suit your taste. The headband is adjustable as well, but it does put a little more pressure on the ears than other models, and long term gaming isn’t necessarily where this headset shines. For short gaming sessions, you shouldn’t have a problem. The inline audio controller has the clip, as mentioned earlier, so it makes it very easy to control the audio coming out of your headset. The buttons are large, and they are very responsive, so it works well. Overall, this headset is nicely designed, easy to control and comfortable on the head.

Overall, the Thermaltake Shock One is a very capable headset. It has plenty of superior features to focus on. There are a few weak points in this otherwise flashy entry. The sound quality is solid but leaves something to be desired, and this headset was not designed for long gaming sessions. When you consider that this is a relatively new venture for Thermaltake, I would say that this was a valiant effort. It doesn’t necessarily represent the best of the best, but it does a solid job in providing gamers with a quality product. For more information on this, and other products in the line, check out www.thermaltakeusa.com.