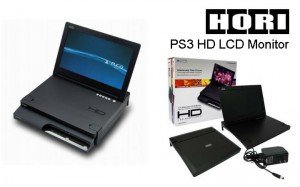 What is it?
The HORI PlayStation 3 HD LCD Monitor 3 is an 11.6″, 1366×768, portable flip-open LCD screen (like that of a laptop) which clips onto the top of your PS3-Slim, using two removable clip brackets on either side. It is powered by a single AC input (included – with US/UK adapters changeable, also included). On the rear of the HORI HD screen is affixed, a small Component output cable (capable of communicating up to 720p), which is simply plugged into the PS3 console.

The only loose cables you’ll have are twofold:
1) The PS3 power cable (you got with your console); and
2) The HORI HD screen power cable (included with HORI HD screen)
This means that, as long as you can find two empty sockets somewhere, your PS3 is portable (you’ll need to take a control pad with you!).

Across the top of the HORI HD screen are 6 buttons: Power (Off/On); Left; Right; Up; Down; Menu.
Image and audio settings can be altered using these buttons; allowing you to control levels of Backlight, Contrast, Brightness, Saturation, Gamma, Sharpness and more (for display) and Bass, Treble, and more (for sound).

How good is it?
The HORI HD screen uses a 1366×768, 11.6″ LCD screen. This means that the pixels are packed into a very small area, allowing for a crisp and sharp image. For the most part, the screen is brilliant. The contrast is ranged, the colours are vibrant and the screen does well to display the full 16:9 aspect. The HORI HD screen does a brilliant job of getting as much of a visual range as is possible from an analogue Component signal. However, there is some motion blur visible at high speeds. Any distance greater than that of the PS3 being on your lap is sub-optimal and you’ll find yourself squinting to see the screen; so use it as if it were a laptop. Also an issue is the slow adjustment of colour saturation to new colour environments and images, particularly at high speeds. There is also a slight ‘hazing’ of pixels in areas of high pixel-density, though this can be corrected by tampering with the Sharpness level of the screen.
These issues are hardly noticeable, however, and do not begin to hamper the experience offered by such a small and mighty screen.

The sound is output through a row of stereo speakers along the back of the upper surface (just behind the screen) and is surprisingly good. Although there is little bass from these speakers, the treble ranges are very precise and clear. The expectation with such small speakers is for them to sound ‘tinny’ – the HORI HD speakers do a great job of not conforming to this presumption. They pack quite a punch, and can respond very well to high volumes. Given that you’ll want to use the HORI HD with your PS3 as if it were a laptop, you may be a lot more fond of the option to use its 3.5mm outputs. Simply plug your headphones into the back (where there are two auxiliary outputs), and you have stereo gaming at considerable quality.

The tech and specs

The verdict
Keeping in consideration that the HORI HD is a small portable screen, the quality it outputs in both video and audio makes it a fantastic little piece of gear.

The HORI PlayStation 3 HD LCD Monitor 3 is exclusively for SLIM PS3 consoles, and is available at the HORI Website as well as from third party sellers.