During a strategy briefing for investors in Japan, Nintendo announced its smartphone development plans for the next several years and unveiled their first game, Miitomo. 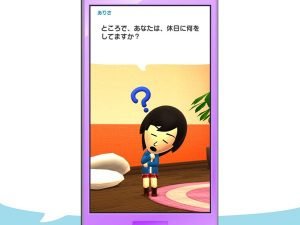 Miitomo is scheduled for release March 2016

The first of five apps Nintendo aims to have released by March 2017, Miitomo will be a free-to-play title in which players will create “Mii” avatars, as has been the custom with the last couple generations of Nintendo hardware.  The focus of the title is on social networking for “people who are hesitant to talk about themselves,” with Wiis able to communicate to other Miis absent player control.  Nintendo Chief Executive Officer Tatsumi Kimishima claims this will “reveal a side of your friends you never knew.”  This first title will be free-to-play, and will feature microtransactions; at least some future titles will require payment to download.  Miitomo is scheduled to be released in March 2016.

Miitomo will be released in correlation with Nintendo’s new membership service, “Nintendo Account,” which Nintendo claims will bridge smartphone users along with users of dedicated hardware such as Nintendo consoles and PCs.  The service will transfer game data between these platforms, a feature that Miitomo is anticipated to take advantage of.  Nintendo has entered into a partnership with DeNA, who will be handling operation and management of smart device software, with Nintendo presumably responsible for the games’ design. While Nintendo was originally scheduled to release their first smart device game in 2015, the release date of Miitomo has been pushed back to allow for “more time to fully promote and explain [the game],” according to Kimishima. 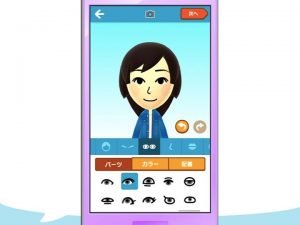 Miitomo is set to feature microtransactions

Nintendo remained quiet on NX development besides Senior Managing Director Shigeru Miyamoto stating that “we are going to be far more aggressive in using our IP, and not just stop with licensing.”  Miyamoto went on to cite Amiibos as being an intellectual property of Nintendo that they aim to have “reach more children.”

During the conference, Nintendo further stated that they would aim to target a larger female demographic this holiday season, and that more familiar Nintendo characters such as Mario will not be appearing on smart devices in the near future.

Thanks to the Nintendo’s delay of their smartphone lineup, Nintendo Co., Ltd. share prices dropped over 10%.  What do you think about the delay, Miitomo, and Nintendo’s partnership with DeNA?  Sound off in the comments.