The latest quirky Anime game release from publisher Atlus seems to have arrived with a bit of controversy preceding it. The subject in question is the removal of some of the games more sexually explicit content by Atlus in order to avoid an Adults-Only rating for the game.  In reading through a selection of related forum posts, some fans feel that game translations in general should be kept intact despite the sensitivities of Western audiences, while others take issue with Atlus for deciding to publish pornographic-lite material at all in the first place. NeoGaf has gone as far as banning discussion about the game due to the visual content. In either case, the game in question “Dungeon Travelers 2: The Royal Library & the Monster Seal” a dungeon crawler RPG from a developer (Aquaplus, Leaf) also known for making adult games , has a Mature rating and features sexual themes and partial nudity left intact, for better or worse depending on the sensitivities of the player.

Dungeon Travelers 2 continues the traditional dungeon crawler revival on PS Vita. Beneath the surface, it functions like a traditional first person dungeon crawler similar to Wizardry (PC,PS3), Etrian Odyssey (DS/3DS), Operation Abyss (PSVita) and Demon Gaze (PSVita). Dungeon crawlers typically fall into two camps—traditional (difficult) or casual (easy). Comparison can best be made with Etrian Odyssey series on DS, which is somewhat responsible for the revival. The original Etrian Odyssey, like Wizardry before it, was a very difficult game true to tradition. Once you created a custom party at the beginning of the game you were thrown out into a labyrinth where you had to survive tough enemies with limited resources and make it out alive before being allowed to save your progress, which made it pretty brutal in the beginning outings and maintained its difficulty curve during subsequent levels. One feature that made Etrian Odyssey more approachable however, was the ability to draw and save maps of the labyrinths on the lower screen of the DS which has become a prominent feature of the series to date.  Currently, some of the more recent Etrian Odyssey remakes have made the games more approachable to new players by providing a pre-created party with added narrative features, but they’re still pretty hard. Operation Abyss (PSVita) sits somewhere in-between giving you the option to create a party from scratch at the beginning of the game (traditional hard mode) or using a pre-created party that gives you the best possible combination for beating the game (easy mode) with an added emphasis on narrative. 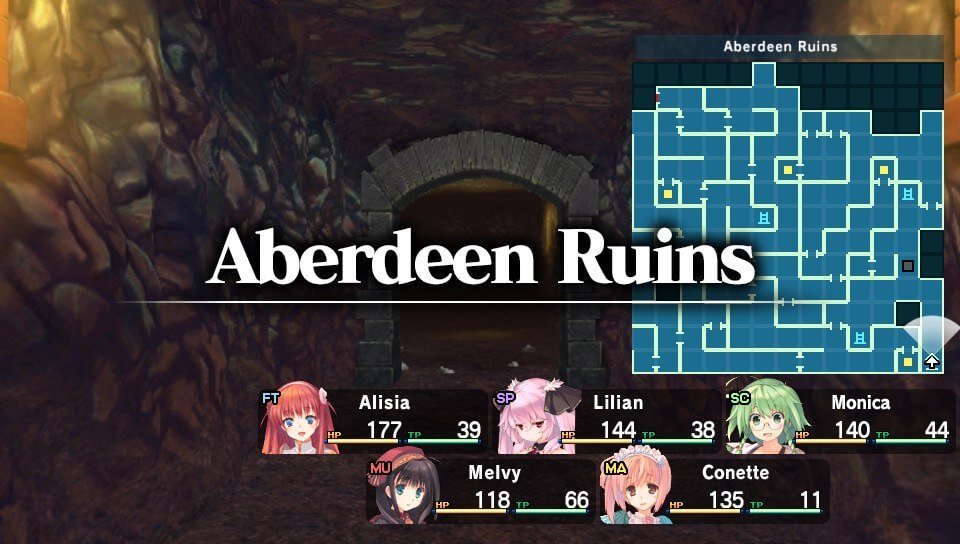 Dungeon Travelers 2 doesn’t stray far at all from the traditional gameplay formula and offers more of a streamlined, casual friendly and approachable dungeon crawler experience by giving you a pre-created character party and tries to teach you about the basics of each character role like tank, healer, and bard, etc., battle formations and tactics via in-game tutorials in order to better survive in the labyrinths. Your party members and NPCs also frequently offer advice as you explore the mazes and you can save anytime in the dungeon, which makes things easier and also respects your time. Wiping out after long exploration trips can be infuriating! Also, NPC vendors randomly appear during exploration in dungeons that offer to heal your party or sell you unique equipment in exchange for gold. To break up the long grind sessions that are staples to the genre, there are plenty of graphic novel cut scenes and dialog to experience between play sessions as well. Some of the early dungeons are pretty short and vary in settings, from forests to temples to towers, coupled with frequent dialog and narrative intermissions. The game has a nice balance of story and gameplay, at least early on.

The story takes place in the Kingdom of Romulea, a world once inhabited by monsters and spirits controlled by a Demon God. They were vanquished long ago by alchemists called Libras through the invention of books called Sealbooks which trapped the monsters and spirits with magic. Now, a new era of peace is disrupted as monsters and spirits have reappeared and it’s up to you Fried Einhand a recently trained Libra to investigate labyrinths and seal monsters away with your Sealbook and enlist the help of lady explorers (Knights, Scouts, Mages) and use their various talents to save the world once again. 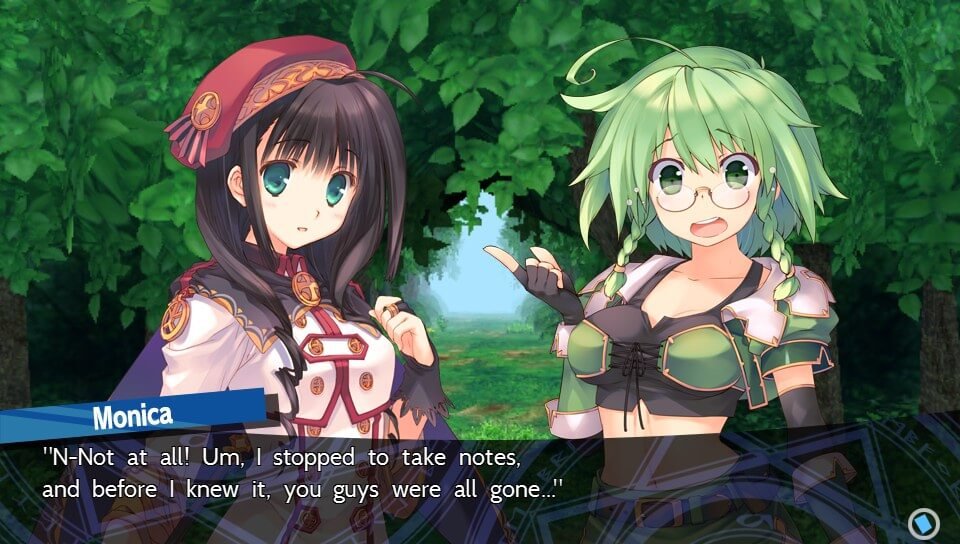 Continuing the JRPG tropes, Dungeon Travelers 2 functions as somewhat of a harem simulator but pushes the line to somewhat newer extremes. You play as a silent male protagonist and collect/control a group of ladies and build relationships with them throughout the game. The game offers opportunities to see these girls in various stages of undress and sexual poses as a reward for defeating them in battle, or when visiting with them in the story, and allows you to add them to your party like Pokémon. Some of the enemies and bosses are a mix of weird hybrid fruit creature things and some scantily dressed ladies in sexual poses.

The battle system is a traditional turn-based affair with random enemy encounters. Once a fight has been initiated, from a menu, you select melee attacks, magic attacks or strong attacks, healing, buffing or de-buffing for your party members and then wait for your enemies to attack and vice-versa. Once you’ve defeated a particular enemy enough times Fried can make a Sealbook which will list an enemy’s stats the next time you encounter them in battle, and also allows your party members to equip these books to raise individual stats like raising Attack stats or raising Defense, for example. Fried can’t equip any weapons or equipment except for special Sealbooks from defeated bosses which give the whole party a stat boost, like raising enemy encounters in dungeons to help with XP farming for example. Since the game has been streamlined, it doesn’t feature a crafting system and instead requires you to find weapons and items from enemy drops for upgrades and gold farming, which enemies drop plenty of. There is also a quest option that lets you receive extra gold and item rewards for enemy and item hunts. You can also unlock sub classes or roles for your party members after reaching certain level thresholds. 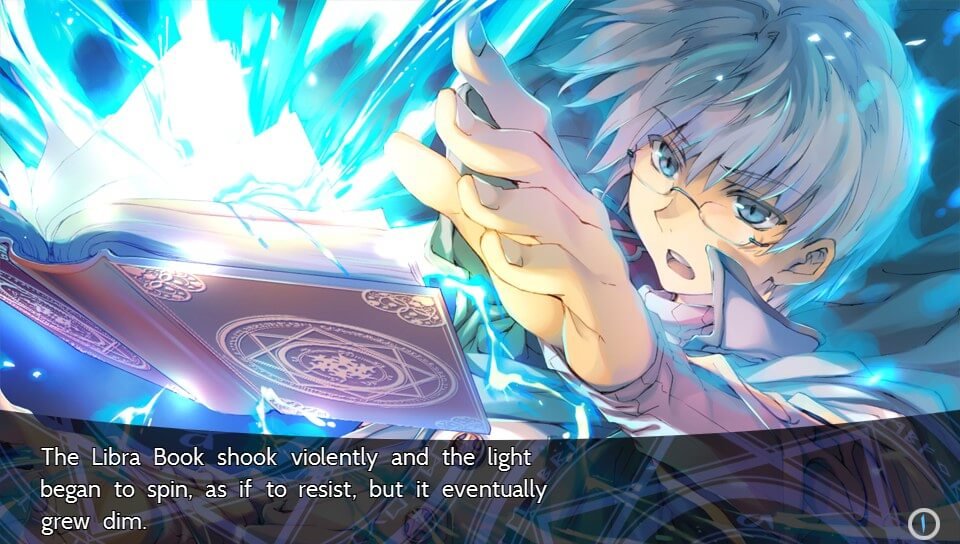 Dungeon Travelers 2 was initially intended for an adults only audience, coming from a developer that specializes in adults only games (Aquaplus, Leaf) and was censored to get a lower rating and make it more accessible (and more profitable), but despite the censorship or editing, the sexual theme is still pretty much inherent and intact and those on the fence about the censorship issue are not going to have their minds changed one bit, the games sexual theme is still very prevalent. In terms of imagery, some of the Neptunia games have featured content that is pretty much on the same level as anything in Dungeon Travelers 2 which also seems to cause a fuss sometimes, but those games aren’t intended to be for adults, and this game is. A game for those interested in the sub-genres of sub-genres of Anime offerings.

Into The Deepest Darkest Dungeons | Dungeon Travelers 2: The Royal Library & the Monster Seal Review
A game for those interested in the sub-genres of sub-genres of Anime offerings.
Overall Score7
Positives
Negatives
2015-08-17
7Overall Score
Reader Rating: (0 Votes)
0.0