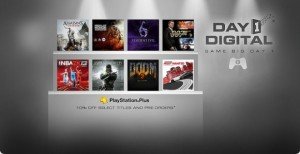 Sony recently announced a new program which will release big name games for download on the same day that they hit the store shelves. The list of games that have already been announced is impressive -

As an extra incentive, customers who have a Playstation Plus account will be able to save 10% off the normal price of NBA 2K3, Dishonored, Doom 3, and Need for Speed: Most Wanted.

This means that whilst other people are camping in the bitter-cold night, waiting for the midnight release of a highly anticipated game, you can stay in the comfort of your own home and get the game at the same time as everyone else. The only things you are missing out on are the disc and box. The only downside is that you will probably need to upgrade your PS3‘s memory, as downloading these games will take up a lot of space.

While this move may seem great for gamers, it is not quite as good for retailers. If this new program catches on, it could wipe out video game retailers, such as Gamestop, almost completely. This wouldn’t be a good thing for either the gamer, or, obviously, the retailer. Downloading a game does not allow for trade-ins or reselling, which would have a negative impact on many retailers, and quite a few gamers as well.

Everyone has reached a point where you look at some of your old games gathering dust on the shelves, untouched for years, and see a perfect opportunity to swap this game for cash, or for that brand new game that everyone is talking about. But with this new system, this wouldn’t be possible.

Also, this kind of just seems like a way to compete with the Xbox Marketplace. Microsoft has already had full games available for download for quite some time, and Sony could be using this as an attempt to call more people to their side of the console wars.

It will be interesting to see what kind of reviews this new program gets, but I personally think it will be a breakthrough for PS3 gamers. At the very least, it will be a great alternative to digging out your blankets for a midnight game release camp out.