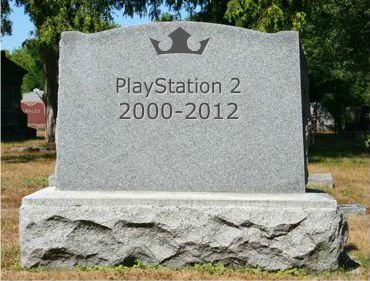 In my younger and more vulnerable years, I spent some time with a certain console. Not only was it able to exceed my expectations as to what emotions electronics could evoke, but it also became a well-worn friend, walking with me on a road that was not as welcoming as one would hope for. The games were subpar to none, creating worlds that have become as familiar to me as the one which we trod upon every day. I became a false expert on many subjects: espionage, cars, carnage, etc.

My friend was eventually usurped by a faster, prettier, less amiable console, but it remained in all of our lives like an old cur who, despite being replaced by a pretty pup, is still the family favorite. The thinly veiled friend that I speak of, of course, is the Playstation 2.

The dreams of a generation have been formed by this magnanimous machine, and many dreams were given form on this platform. However, I was recently informed that the PS2 will not be available anymore. I cannot deny that I became quite emotional upon hearing this fact. What will become of these worlds that we’ve worshipped for so long? I immediately ran to my console, rag in hand, ready to do whatever I could to make this machine run for as long as possible. To make use of an incredibly trite phrase, this is the end of an era.

While the PS2 may not be my favorite console (that hallowed honor belongs to the Super Nintendo), it was responsible for shaping my gaming habits. My deep desire to delve into the daunting worlds of various RPGs was formed upon the SNES, but solidified on the PS2. A massive amount of time went into fine-tuning my twitchy thumbs’ reaction times to hit a henchman’s head from a hundred yards. By the time I finally ambled to the PS3, I had a strong feel for what games I would continually enjoy, not to mention a skill level that was to be reckoned with. If it wasn’t for the PS2, my burgeoning obsession with the virtual worlds of games could have been joylessly squashed like an ant beneath an uncaring boot.

Now, as we prepare ourselves for the eventual release of the latest Playstation, we must bid a fond farewell to our constant companion. As each console slowly dies an ignominious death, the Playstation 2 will fall into the realm of museum pieces. We’ve begun to see some of the more popular PS2 titles become available for other consoles, but they shall never have the full library available; it’s just not fiscally viable, nor is full backwards compatibility. There will undoubtedly be specific games that you or I or somebody loves with an undying fervor, but will fade into the horizon of our memories like a ship carrying a loved one to a distant land. The video game court (which exists only in my fevered imagination) shall eventually find the PS3 guilty of murder in the 1st of the PS2, heavily abetted by the PS4. To take a line from a better writer than I shall ever be, I have only words to play with, because I no longer have the Playstation 2.