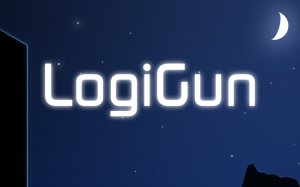 When it comes to puzzle games, developers have to walk a fine line in terms of difficulty, balance, and logic. Make your puzzles too hard, and you’ve got frustrated gamers reaching for a Youtube walkthrough; make it too easy, however, and the puzzles become an aimless distraction instead of a satisfying slice of gameplay. Introducing too many mechanics can make your game impossibly complex and difficult to handle, while sticking to just one mechanic gets terribly dull when you run out of creative applications. 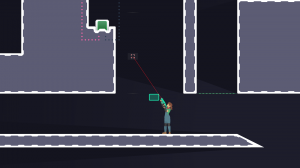 Most would agree that one of the few platformer puzzle games in recent years to achieve this balance was Portal, and this perfect balance spawned dozens of homages, inspirations, and imitators of varying quality. At first glance, you would probably lump LogiGun into that group, but the original LogiGun actually predates our favorite companion cube simulator by at least a few months. This time around, developer Alfred Lam has revamped everything in the game, including graphics, gameplay, and levels, to release this updated, commercial version. So in a way, it would be pretty unfair to compare LogiGun to Portal. But there is one comparison to Portal that Lam would no doubt be pleased to hear: LogiGun achieves the same perfectly rewarding balance of complexity and difficulty, but with entirely new mechanics and a satisfyingly steep level of difficulty.

There’s very little plot to speak of in LogiGun, and the few snatches of story are always tantalizing, but never really expanded on. You are a girl trapped in a tower full of science testing chambers, and your goal is to scale the tower and reach the source of the taunting voice that eggs you on. It’s a far too familiar set-up, but the jokes are actually quite clever, and there is a small handful of brilliant uses of fridge logic in the environment and within the dialogue. The graphics are rather simple, but still attractive, using a neat, uniform shape and color style while supporting it with smooth animations and fantastic lighting. The soundtrack is a slew of catchy and varied electronica, which is fun to listen to, but unintrusive enough to prevent you from getting annoyed during the really difficult stumpers.

A puzzle game can easily get by on scant scraps of a story if the puzzles are good, and graphics can only do so much for a game, so it’s good that the puzzle design in LogiGun is terrific. As the title implies, LogiGun is all about using a varied arsenal of guns logically. You’ve got a crossbow that doesn’t conform to petty physics like gravity, a platform generating machine, a magnetic laser, and an endlessly amusing grappling hook. Each level includes no more than one or two of the four guns and 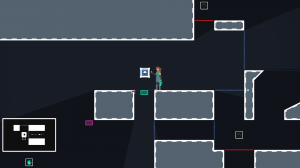 tasks you with figuring out how to fully extend your capabilities to reach the exit. There are also tons of the other usual puzzle platformer elements at work, like torches, lasers, tricky switches, bombs, and arrow bending gravity wells. It all sounds like something good, if a bit generic, but the beauty of LogiGun comes down to how well it uses the tools it has.

The game operates on a learning curve, but that curve is steep, and things are going to get very difficult very quickly. LogiGun is definitely one of the harder puzzle platformers out there, so be prepared. This is a game where you really have to think, experiment, try everything, quit for a while, play something else, come back to it, and spend another ten minutes before the inspiration will finally hit you. There’s no danger or combat, and nothing will kill you. There’s never a puzzle that relies on wonky physics or inhuman reflexes, so it’s just a matter of using your head to work out the answer. This is helped along by the game’s rule of limiting the player to just one or two of the guns per level, which tempers your mindset and helps you focus on a smaller selection of solutions. The game’s seemingly impossible tasks are tough, but they make you feel like the smartest person in the world when you finally solve them, which is a priceless feeling.

The one major complaint only affects a handful of puzzles, but it’s still a fairly frustrating issue. The camera is adjustable on the options menu, but certain puzzles force you to hit an arrow target off screen with no way of actually seeing the shot. A more dynamic camera certainly would have been appreciated.

Sometimes the puzzles do get a bit unwieldy, especially the final puzzle, which breaks the two gun limit rule and suffers a bit as a result, though it does make for a brilliantly clever solution. There’s also a lot of stuff to keep track of, particularly when it comes to the color-coded barricades which block only certain types of objects. The only other issue that cropped up was the loose physics, which probably could have been tightened up. However, the game’s total lack of timing puzzles or precision jumps means that the physics did not hamper a single puzzle. If you’re trying to rely on physics quirks to solve a puzzle, it’s guaranteed that you’re doing it wrong. Even with these quirks, LogiGun is still a very enjoyable experience.

Final Verdict: While the story is scarce and the graphics are simple, LogiGun absolutely nails the puzzle balance by providing a truly challenging, richly rewarding puzzle platformer. It’s got smart puzzles that truly make you think mixed in with lots of variety in game mechanics without becoming overly cumbersome.

You can pick up LogiGun DRM-free from the official site or on Desura, and you can also vote to bring the game to Steam on Greenlight.

This review is based on a review copy of the PC version of LogiGun provided by Alfred Lam.