The use of cell phones as a primary mobile gaming devices has drastically increased in recent years. More and more people move away from flip and text only phones to new smart phones.   New Gamer Nation has elected to cover and review cell phones as it relates to gaming only.  This not about which carrier provides the best coverage or who has the best 4g network but about what devices work best for the mobile gamer.  We will look at the internal workings or chipset of the phone, the device’s screen, the battery life, and the availability of games for the device. 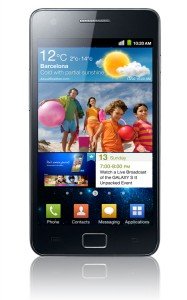 from other smart phone competitors.  However, the Samsung Galaxy S2 is not a universal device, and it does differ from carrier to carrier.  Carriers have suggested features and additions to Samsung based on what they are looking for in a device.  The individual carrier and Samsung came to an agreement on the specifications of the device to make sure it works seamlessly for the carrier’s customers. The differences, while minor, will not take away from the overall experience of owning a Galaxy S2 series phone.

The screen, quite frankly, is simply stunning.   Samsung has perfected mobile viewing by equiping their super AMOLED plus screen on the device.  It provides users with a resolution of 480×800 pixels.  Users will also notice that this device has a wide viewing angle. Therefore, wiewing angles are not an issue for the screen.  The resolution is great, and users will immediately notice the size of this screen.  The screen is an eye-popping 4.5 inches wide measured diagonally.  This giant screen makes gaming on the device, easier to see and more pleasurable to look at.  If the game requires on screen controls, there is still plenty of space for the games controls and viewing.  Even for people with large fingers will have no issues viewing their game while playing.  The screen is easily worth the price of the phone.

The phone is running, out of the box, Android 2.3.5 otherwise known as Gingerbread.  Currently, Ice Cream Sandwich is all the desert rage so the OS is a generation old.  For those non-android users, every time Google releases a new version of their OS, they name it after a desert.  The most current release is code named Ice Cream Sandwich.  At time of publishing Samsung has not released an update or timetable for an upgrade to Ice Cream Sandwich. While there are no issues with Gingerbread, users wanting the latest OS to run their games on will have to look elsewhere.

The Galaxy S2 989 is powered by a dual-core 1.5 GHz Qualcomm Snapdragon processor.  This processor effectively powers the phone and gives you plenty left over for games.  This powerful processor runs games smoothly with little to no lag, which will make any gamer happy.  Once you go dual-core processor, you will never go single-core again.

Overall the chipset is strong, but not as strong as other S2 devices.  Additionally, the lack of Ice Cream Sandwich will upset some members of the phone community, but it should not have a huge effect on the gaming community.  Actually, as noted below, the outdated OS actually improves the users experience.  This is the only area where Samsung could have done a better job.

The Android market, which has been renamed Google Play, is a robust marketplace.   There are plenty of games available for download, and there new games added everyday. While this device does not currently run Ice Cream Sandwich, mobile gamers won’t have to worry about using Gingerbread.  In fact, the lack of Ice Cream Sandwich can be seen as a benefit. Ice Cream Sandwich users will notice that some games do not work on their 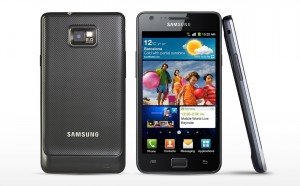 phone. A number of developers have not yet updated their applications to work seamlessly with Ice Cream Sandwich which means less playable games for the average ganer. Galaxy S2 users will not have an issue finding and playing their favorite games.

Android devices have a long history of being devices with a subpar battery life.  Now, phone developers are catering to all the battery hogs out there.  The Galaxy S2 is powered by an 1850 mAh lithium ion battery.  The specifications list the battery at seven hours of talk time.  This phone can provide the average gamer with a full day of play and talk without having to plug in the charger.  This is by far, one of the best batteries I have seen in a phone and it is perfect for any mobile gamer no matter how much you play.

Overall, Samsung has done a great job in providing the mobile gamer with a worthy gaming cellular device.  The fantasticly large screen, above-average battery life and  a powerful internal chipset combined with the expansive Google Play marketplace make this phone a must have for the mobile gamer.