In a press release earlier this morning, Nintendo’s Director and President Satoru Iwata has announced that a 9th generation console is in development, codenamed “NX.”

This comes along with other news that Nintendo and mobile developer DeNA will be partnering up to develop software for smart devices. To this end, Iwata said, “potentially, any Nintendo IP could be used in our smart device software.” He compares the move to how Nintendo embraced the emerging technology of televisions decades ago.

Iwata was quick to reassure fans that Nintendo is still developing a dedicated gaming platform– and that’s where the NX comes in. Sadly, he says that it’s too early to give any other details. He promises more information “next year.”

This graphic below sums up their approach: 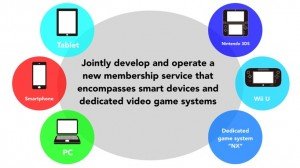 Nintendo intends to embrace the shift towards mobile gaming with apps. The key differentiator is Nintendo’s IP– which DeNA’s President Isao Moriyasu claims is “the most beloved game IP globally.”

This press release is telling us to expect a Nintendo invasion of mobile platforms, and DeNA will be in charge of bringing Nintendo IP to the front lines. The possibilities are endless, but Iwata gives us a few ideas:

…as for which Nintendo IP will be used, we do not intend to make any exceptions…even if we use the same IP on our dedicated video game systems and smart devices, we will not port the titles for the former to the latter just as they are.