Hex-based strategy RPG Blackguards 2, developed by German based Daedalic Entertainment, first piqued my interest after seeing a preview of the fantasy game in action and its dark, gloomy atmosphere and visuals immediately stood out to me. I particularly enjoy horror games and role-playing games, so a marriage of the two themes tied with turn-based action set in a dark fantasy world with magic and monsters made it hard to pass up. The bleakness of the world is befitting of the story and characters and reflected in the main protagonist and her struggle to keep her sanity while on a ruthless path of revenge after being confined and tortured for years. While the game is light on story elements, it mainly serves to break up the campaign which mostly involves overcoming a series of battle maps by use of strategic troop placement and tactics as opposed to open world exploration.

Aside from sharing the same setting and returning party members from the prequel, Blackguards 2 pretty much features a standalone story following the military conquests of a new protagonist named Cassia of Thenos, a noble woman pursuing her dream of ruling Aventuria from the Shark Throne. Unfortunately for her, she is immediately thrown into an underground labyrinth and held captive for years, kept accompanied by large spiders, the venom of which causes her grotesque facial disfigurement and starts to wear down on her sanity. Over the years, every chance to escape is met with puzzle-like dungeons filled with traps and creatures, which serve as  both game tutorial and also provides the skills necessary to eventually escape. Once out of the labyrinth Cassia sets off to recruit heroes and mercenaries to begin her revengeful conquest of Southern Aventuria one territory at a time.

While Blackguards 2 isn’t a traditional open world exploration based role-playing game, the majority of the environments are composed of pretty large battle maps that offer a lot of space to move around in to explore and plenty of objects to interact with like doors, bridges, levers, switches, and collapsible walls and features a variety of different backgrounds like towns, jungles and caves that have really great graphical, and lighting effects. When not in combat, you have access to the world map with a god view where the game stages, or levels, are represented by different labeled nodes on the map. Once you complete a stage, you can progress to the next node on the map which sometimes branch off, opening alternative routes. The larger nodes, or towns, usually represent higher difficulty, but also progress the story and offer better items for your characters like weapons and armor. Once a node has been claimed or retaken by your party you can visit the town and talk to NPCs, who offer information, weapons, items, and potions. Occasionally when crossing the map over completed nodes you will be forced to defend the territory through a sort of tower defense style game using your mercenaries.

Blackguards 2 doesn’t introduce anything new to the strategy RPG genre besides implementing interactive objects and some battles do occasionally incorporate puzzle-like elements to overcome, which can sometimes border on frustrating. Being a strategy RPG, most of the games action takes place on battle maps which you navigate by slowly taking turns crossing hex shaped tiles, like a board game. Your characters on the map choose combat options from a radial pop-up menu that appears when you right-click on a character, or you can assign common attacks to hot keys. Maps can contain different terrain featuring hazards and traps that need to be overcome by using strategic troop placements and tactics that take advantage of the environment. Sometimes you will need to defend through waves of enemies, or simply solve a puzzle by breaking crystals or opening gates, while other times you will need to reach an objective and then get all remaining survivors back to an exit. There are too many situations where endless re-spawning enemies are thrown into the mix just to make things more fun. Once you complete a stage you are rewarded with Adventure Points, which you can spend on characters skills like health, agility or powerful abilities etc. 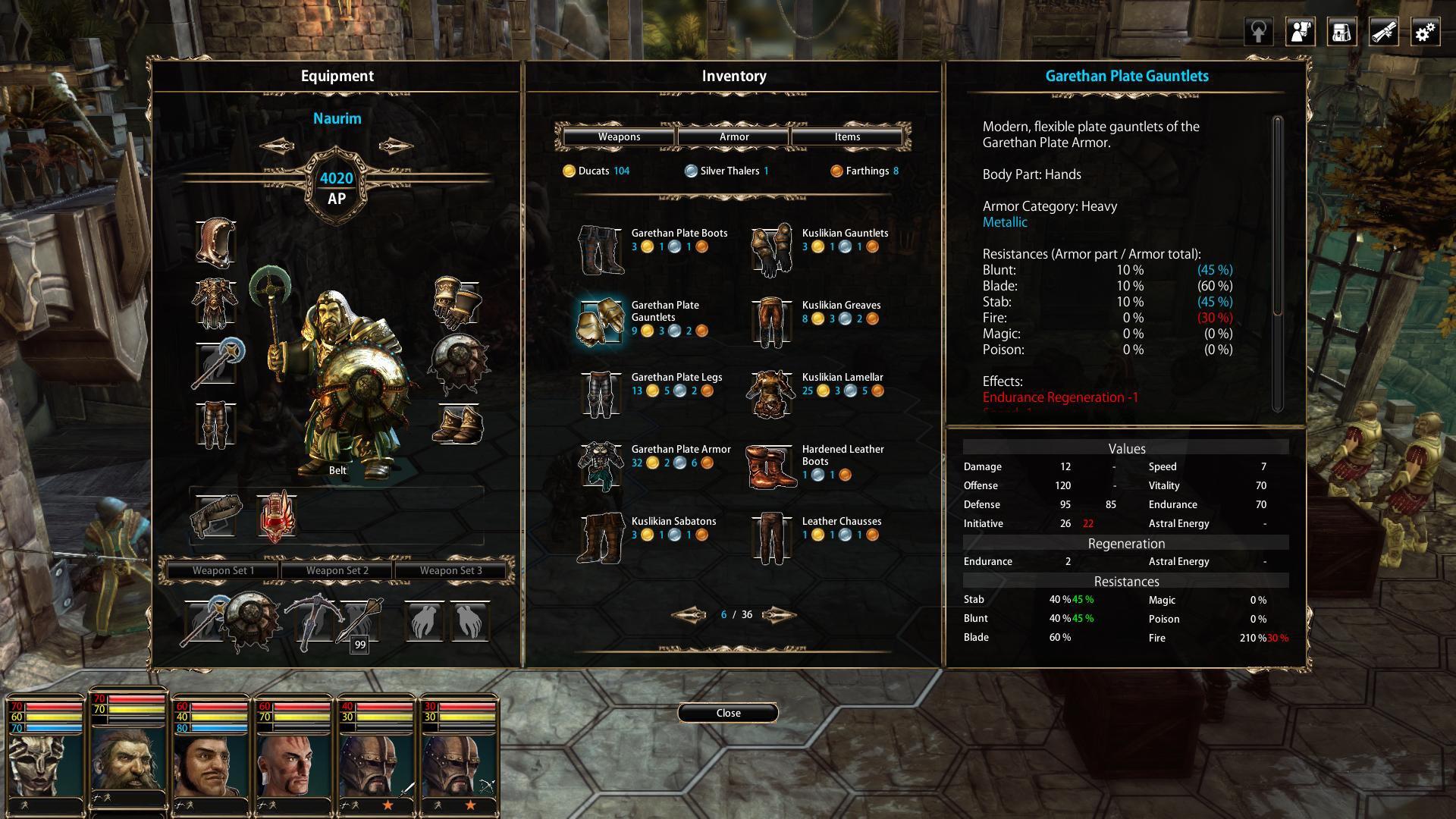 I was quite impressed with the way that the game allows you the freedom to customize your characters with any ability or role to suit your preferred game play style– but with some caveats. You cannot create a custom character from the start of the game. You start off with the main character that is a blank slate, Cassia, who you can build into any type of weapon class you choose. For example, you can make her a purely magic character, a sword and shield warrior, or a hybrid of both, like magic with swords –you’re choice! Once you get through the opening tutorial sections and recruit three more heroes, a Dwarf that specializes in axes, a Warrior that is skilled with a spear and a Mage, they will have pretty high pre-set stats for their respective weapon classes but you can freely change their weapons and abilities if you so choose. The game also allows you to use mercenaries in battle which grow more powerful as you complete stages.

Overall, I had fun with the game. I found the streamlined user interface, character progression system, and radial combat menu pretty straight forward and easy to use. The line of site feature which lets you see the distance your weapons can reach was also a very useful implementation. While I usually find strategy games to be fairly long and complicated with steep learning curves, I found this game to be pretty accessible with intuitive combat. However, I do feel like the battles went on for much longer than they should have due to the slow enemy movements which turned short battles into very long boring chess matches, especially in the beginning when you are under powered and there are tons of re-spawning enemies. There also seemed to be unbalanced difficulty, where in some cases I rarely died on a first try through a map, while other times there were puzzle elements thrown in which made things quite frustrating and in some cases there were  only vague instructions to rely on. Despite the beautiful visuals and voice acting the plodding combat sometimes made playing the 20+ hours game feel like a chore. Requires a lot of patience.