In the conversation about the greatest point ‘n’ click adventure games of all time, Revolution’s Broken Sword series often gets unfairly overlooked in favor of the classic Lucas Arts titles: Monkey Island, Grim Fandango, Day of the Tentacle and the like. But the original Broken Sword, The Shadow of the Templars, can stand up alongside the very best the genre has to offer. And after several years away from the scene, Revolution are back with a Kickstarter-funded return to the franchise’s roots.

As the name suggests, The Serpent’s Curse is the fifth entry in the Broken Sword series. It is also unashamedly a real piece of fan service. It hearkens back to those halcyon days of The Shadow of the Templars and The Smoking Mirror, which is most welcome after the missteps that were the third and fourth titles in the series, which ventured somewhat unsuccessfully into world of 3D action. The Serpent’s Curse has been crafted very much in the mold of the classic 2.5D point ‘n’ click adventure, complete with environment scanning, well-written dialogue and item-combining puzzles. 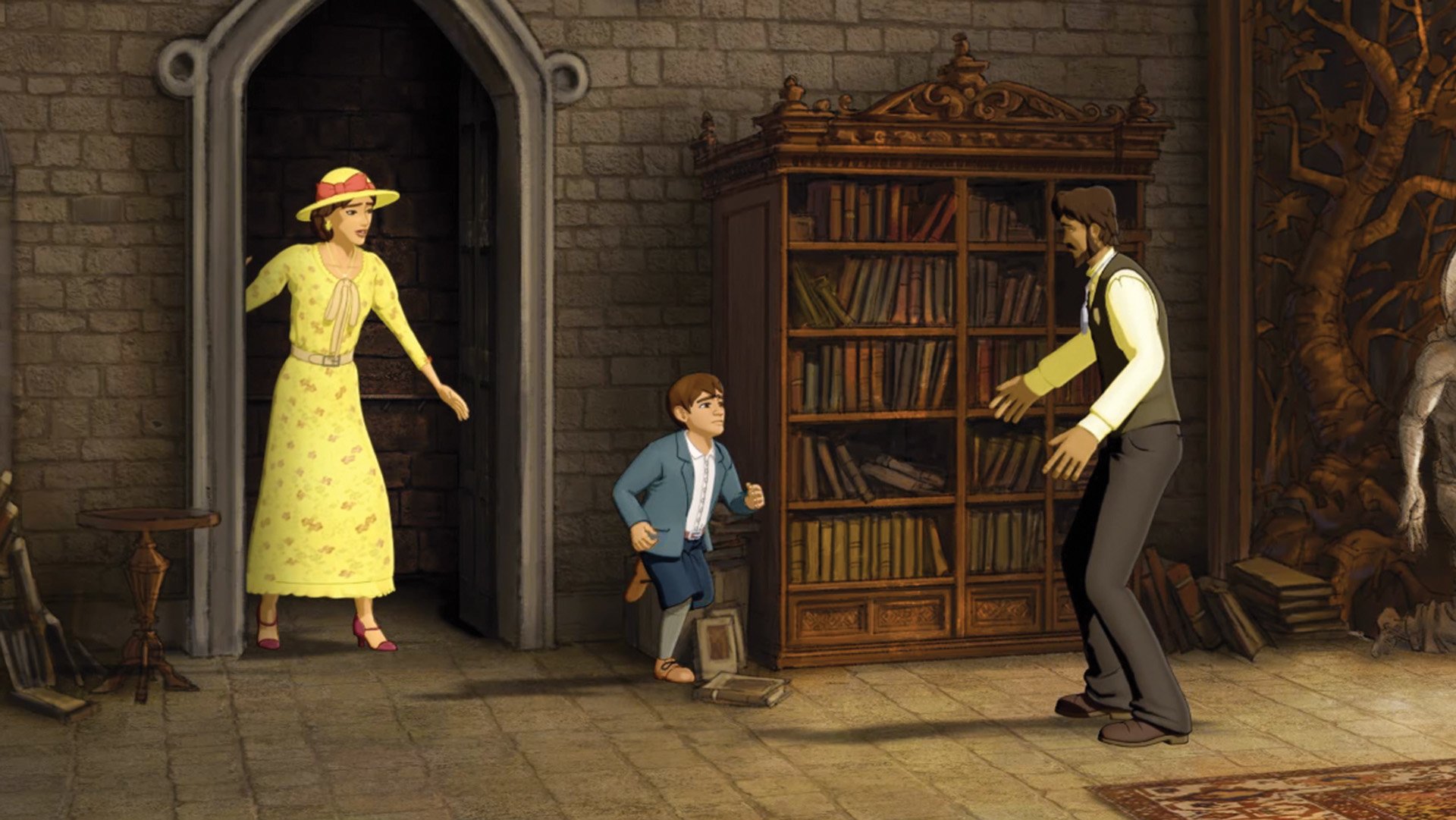 The game’s events date back to World War One Spain

The game opens with the familiar narration of series protagonist George Stobbart, the slightly pompous, but endlessly endearing, American tourist who has a penchant for stumbling upon ancient conspiracies. Our George is working in insurance; his latest project a small art exhibition in Paris. On its opening morning he meets up with another series veteran: sassy Parisian journalist and long-term love interest Nico Collard, who is there to cover the story. But as George and Nico are enjoying getting reacquainted, a gun-toting pizza delivery driver storms into the building, steals one of the paintings and shoots the gallery owner before fleeing the scene. Thus begins another classic Broken Sword adventure, as George and Nico try to uncover the shooter’s identity and why the painting was so important that it was worth killing for. 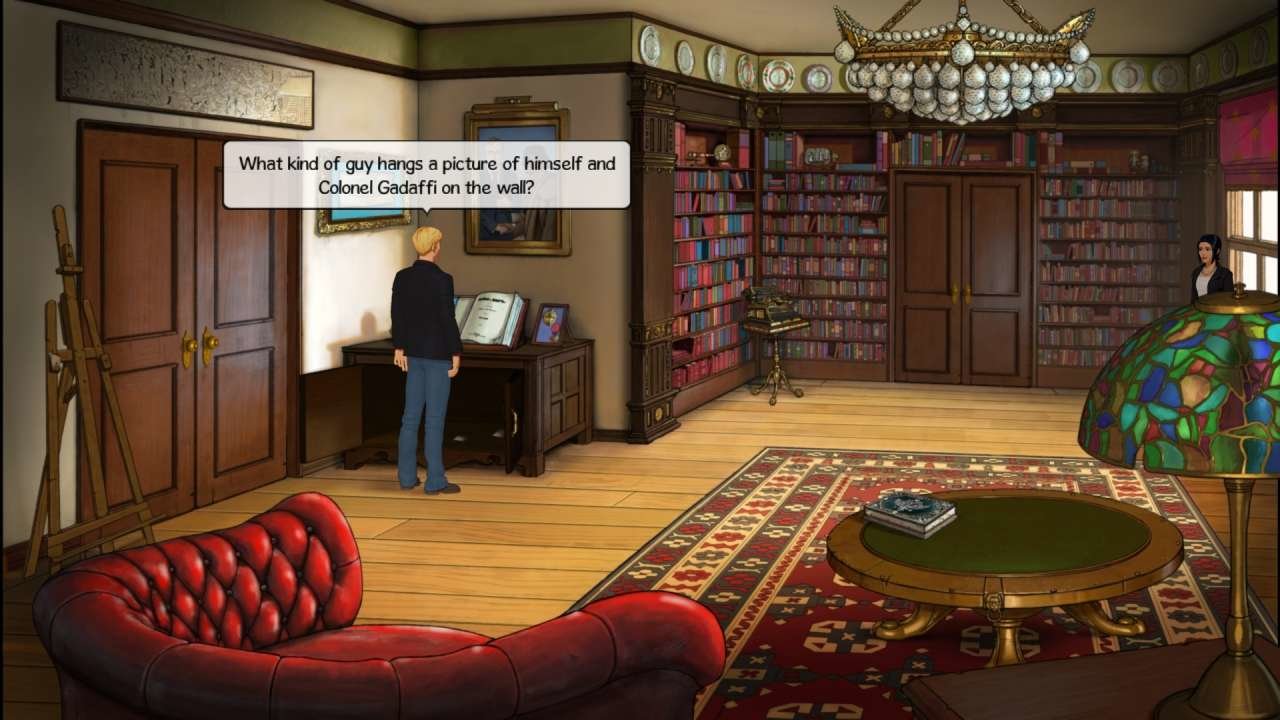 Broken Sword 5’s narrative is as compelling as ever, with plenty of twists and turns to keep you guessing. Sticking with series tradition, the story is steeped in historical and religious themes, which adds a real sense of drama and weight to proceedings. In a first for the series, The Serpent’s Curse is split into two episodes, each clocking in at roughly six to seven hours. What is really impressive though is how things seem to be wrapping up nicely at the end of the first episode, the mystery has apparently been solved and everyone can go home, until one last twist turns everything on its head and sets things up brilliantly for part two.

The characters themselves are also fantastic for the most part. George and Nico are as well-written and superbly voiced as ever (with the same voice actors reprising their roles) but even most of the lesser characters bring something to the party. From the quirky Bassam, a young student who owns a market stall opposite a shady security company that George is investigating, to Shears, an initially stereotypical English dope who turns out to be so much more, you’ll rarely not have a smile on your face when interacting with the game’s colorful cast, with mostly excellent voice helping to bring them to life even further. 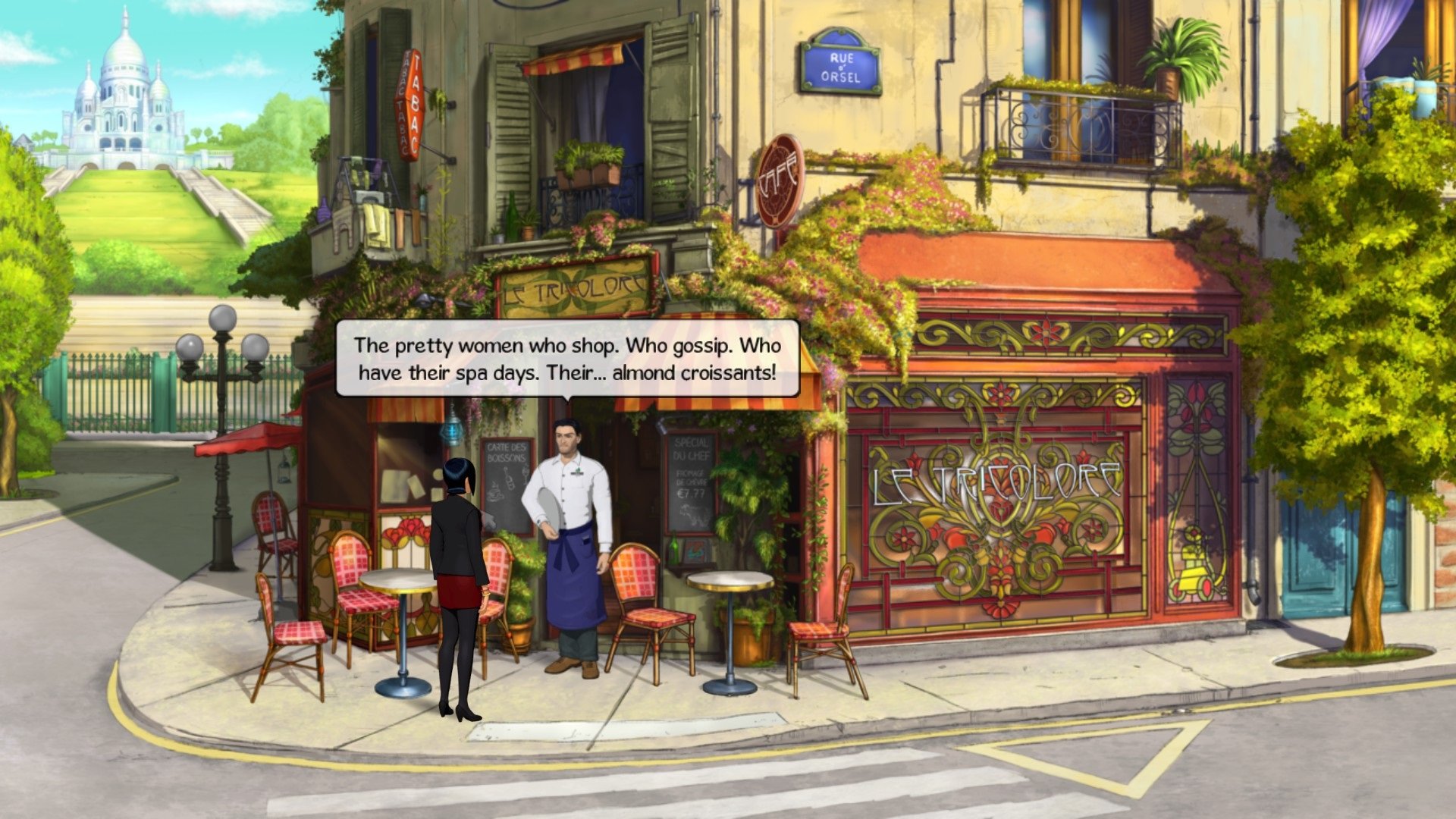 You’ll chat to some odd characters on your journey

The Serpent’s Curse does unfortunately suffer from a common problem encountered in the series. In the final third, the narrative begins to spiral out of control as it leaves reality behind and dives head-first into the land of the far-fetched and unbelievable. It’s a real shame because a story that for the most part draws gasps and keeps you consistently gripped threatens to devolve into something that will have you groaning and saying “really??” It certainly isn’t a terminal issue but is frustrating nonetheless.

Gameplay-wise, The Serpent’s Curse doesn’t stray too far from the norms of the point ‘n’ click genre. Alternating between playing as either George or Nico at certain points, most of your time will be spent speaking with various characters to advance the story, clicking on parts of the environment to examine or interact with them, and of course, completing puzzles. These conundrums have some nice variety, some are very straightforward, whilst others will really pose a challenge. Plenty of them also involve the classic point ‘n’ click trope of combining items in your inventory, which brings with it the usual boiling rage that can arise when you can’t work out what the damn game wants you to do at a certain juncture. And this does happen a few times, particularly towards the end of the second episode, which threatens to derail proceedings just as they’re hurtling towards a dramatic climax.

However, there is still something to be said for the rush you feel when you’re knee-deep in a murderous conspiracy that dates back centuries, examining a hidden chamber, finding new clues and piecing them together to slowly bring clarity to long-forgotten mysteries. These moments of discovery and revelation are unquestionably when The Serpent’s Curse is at its brilliant best. 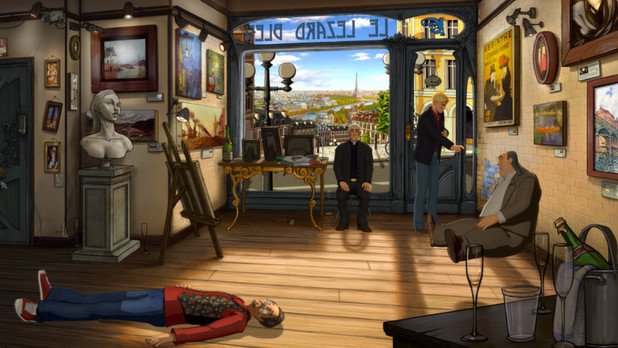 The scene of the crime

The fifth game in the long-running series has received a glossy lick of paint since its heyday, whilst still retaining its charming faux-cartoon look. It really is a very pretty game, with some wonderfully detailed and atmospheric environments helping to add to the general tone of the story. The character models are also nicely done, even if some of the animation is a little stiff at times.

The Broken Sword series has always carried a dry sense of humor close to its heart, and I’m delighted to report that it is still alive and well in The Serpent’s Curse. George is never too far away from another one-liner, even in the most precarious of situations. But the game’s sense of fun is demonstrated nowhere more so than with the cameo appearances of a few classic characters from past titles. Without wishing to spoil anything here, it goes without saying that it simply cannot fail to raise a big cheesy grin on the face of any long-time follower of the series when a much-loved old friend pops up unexpectedly. Never have I been so gleefully delighted to happen across a humble goat than in The Serpent’s Curse! And even to those who are new to the Broken Sword series, the expertly crafted script will no doubt get plenty of laughs throughout your time with the game (if this is indeed your first experience of the series, then my advice would be to step away from this marvelous review and go and play The Shadow of the Templars and The Smoking Mirror right now…I’ll wait… you back? Awesome, weren’t they?).

Broken Sword 5: The Serpent’s Curse is quite simply a love-letter to those who have supported the series and made it the success it is. It’s a classic point ‘n’ click game, warts and all. Yes the puzzle-solving can occasionally frustrate, but the excellent narrative and characters will keep you from giving up and walking away. You don’t need to have played a previous game in the series to be able to have fun with this fifth installment, but it will certainly enable you to extract maximum enjoyment from the experience, as well as revel in all the wry in-jokes. It is just a shame that by the time you reach the game’s conclusion, the story has spiraled too far into the wild and wacky, but even if the final destination isn’t quite what you’d hoped for, the journey there is still a damn fine one. It’s good to have you back George, and hey, don’t be a stranger…

This review is based upon  a downloaded retail copy of Broken Sword 5: The Serpent’s Curse for PlayStation Vita. Also available on iOS, Android, PC, Mac and Linux. Developed and published by Revolution Software.