My knee was shaking as I managed to scramble away from a savage duel that nearly cost me my life. I quickly scanned the battlefield and noticed an attacker heading right for me. I tried to regroup with my fellow knights, plowing through a small crowd of lesser soldiers I attempted to lose the attacker, but I was struck down before I could I reached them. This was only one moment in Ubisoft’s For Honor and yes my knee was shaking as I held the controller.

For Honor takes some traditional ideas that may be found in shooters and turns them all on their head. How can it feel like a shooter without guns? Well for starters the game mode “dominion” has 3 points scattered across a rather small map. The goal is to capture these areas in order to gain a boost in points. If the point is lost, then the points go directly to the other team and can cause huge swings in the battle once gained or lost. It is imperative to have control of at least 2 of the points in order to win. Once a team has reached 1,000 points the opposing force begins to “break”. Once they are breaking respawns will no longer be available. There is a chance to “rally” by gaining a capture point. A broken team can regain the ability to respawn by rallying, which adds for even more tense moments.

For Honor is a very intimate game. Each duel is as tense as the next. Once 2 human players square up they enter a duel mode by holding in the left trigger. This puts the combatants head to head and locks on to the enemy. There are then 3 choices of where to defend or attack. This is controlled by the right stick and must be held either up, left, or right. A quick flash will let you know where the opponent is striking, but it happens so fast that a minor input error can spell death. With a choice of either light or heavy attacks the combat is very dependent on timing. Heavy attacks stagger the opponent and leave them open for another strike, while quick attacks deal moderate damage that adds up. You can’t block everything as each player has access to a guard break that will open up a defense and lead to a quick strike. 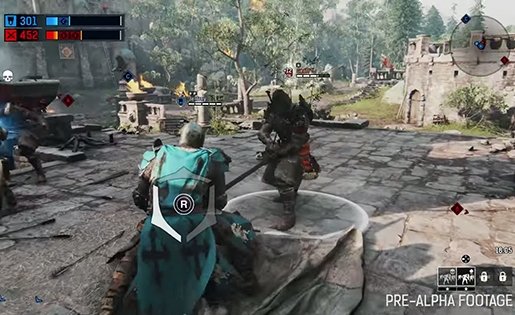 It reminds a bit of a 1 on 1 fighting game, but with so much more happening around you. There are also fodder enemies that are A.I. controlled. These little guys run around the map and engage in a gang battle right in the middle of all the action. The A.I. controlled enemies do not require the player to enter duel mode, but instead go down in 1 or 2 hits. These soldiers must be cleared out of an area before a team can claim it. While they don’t offer much of a challenge they can kill you if you are not careful and man is that embarrassing.

The real challenge of For Honor is communication. This game requires heavily on the fact that all 4 teammates are on the same page and in constant communication. If you find yourself in a 2 on 1 battle the only option is to run or try and stand your ground until some of your teammates arrive. This sets up ambush opportunities and ways of drawing in your enemies to fights they would rather avoid.

For Honor is familiar, yet introduces a bevy of different gameplay mechanics that make it unlike any other game I’ve played. With its tense 1 on 1 battles and emphasis on team play it is truly a game to keep an eye on. For Honor is set to release some time in 2016 on PC, PS4, and Xbox One, however no set date has been revealed.