Ever wanted to play the villain in a Zelda game? Are you tired of rescuing princesses, collecting 7 shards of whatever to defeat an Ultimate Big Bad Evil, or just plain-old saving the world? Lifespark Entertainment seems fed up with being the good guy all the time, too, and they’ve got an answer: Rack N Ruin.

Rack N Ruin is ex-Blizzard artist Tyler Hunter’s attempt to fuse together the most disparate of genres: adventure games and shooters. The elevator pitch is equally intriguing: A Link to the Past meets bullet hell. Indeed, Rack N Ruin wears its influences on it’s sleeves. Not in the same conspicuous, satirical way that Guacamelee did, but in the very design. A very Zelda-esque musical flourish marks completed puzzles. Dungeons are themed around an element or item that is required to make progress. Even the camera angle is the same, and the eponymous hero Rack controls much like Link did in his 16-bit days. The gameplay starts from familiar foundations, then branches out in some fun directions thanks to a strong central personality. 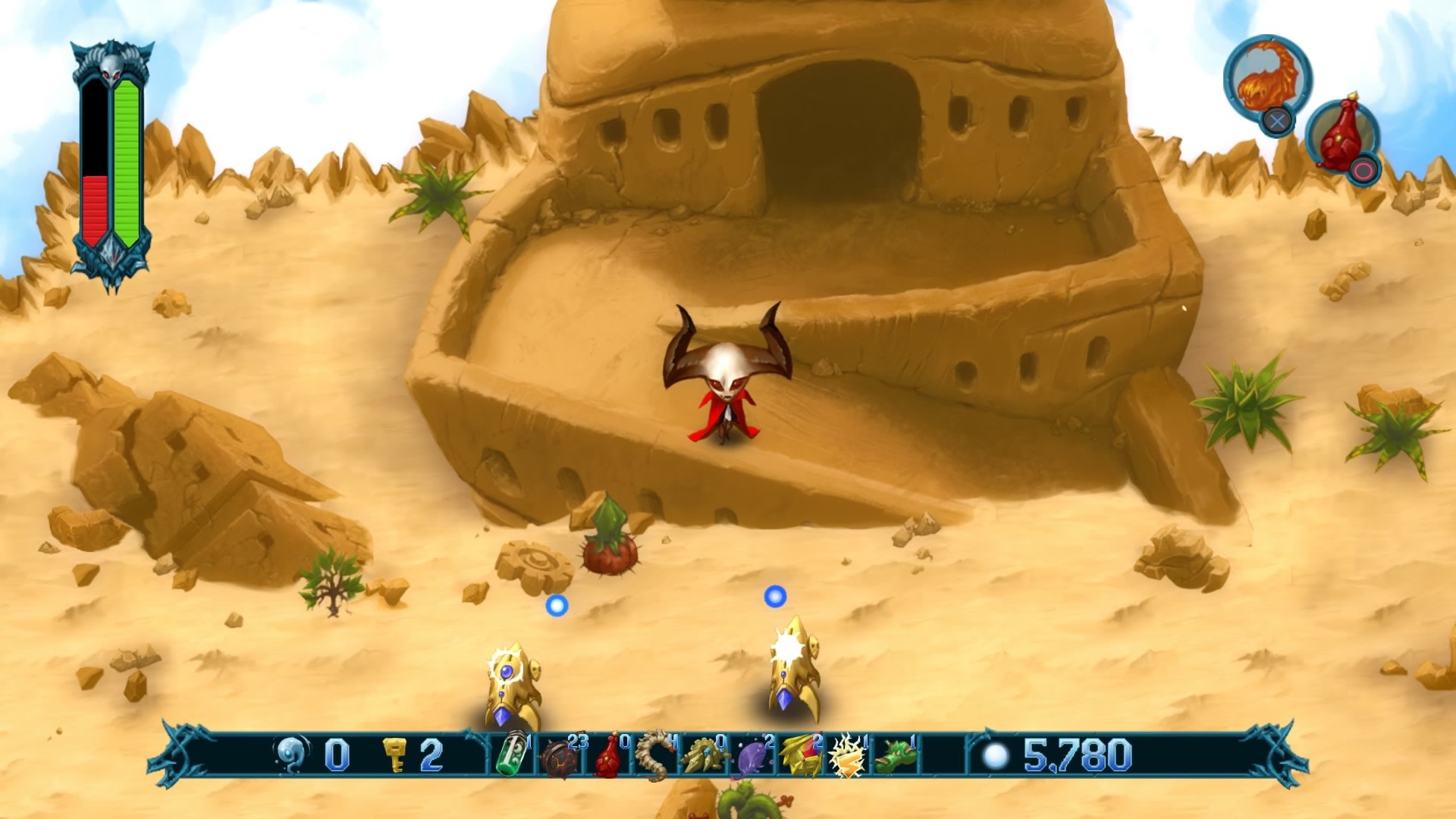 Most of Rack N Ruin’s charm comes from the sharp writing and Rack’s frequent lambasting of fantasy tropes. Rack is a tiny demon with a big mouth and an even bigger ego. He’s the top lackey for Lord Ruin, an eldritch horror looking to, naturally, enslave the entire known universe. After a string of failures, Lord Ruin sends Rack on one last mission to redeem himself: corrupt the lush, innocent world of Galia.

The gameplay is derivative, but the game oozes personality. Even the first few lines of dialogue had me chuckling, thanks to Rack– a sarcastic anti-hero without the hero. Frankly, he’s utterly despicable. For most of the game, Rack doesn’t have a good side. No “heart of gold” cliches here. He wants to corrupt Galia and kill everyone in his way. Despite Rack’s evil intentions, I couldn’t help but root for the little guy. Say what you want about his goals, but Rack has convictions and a strong personality. That’s enough to make a character compelling enough to follow. Seeing a hero’s journey from the eyes of the antagonist is a refreshing take on what could’ve been a stale fantasy romp. 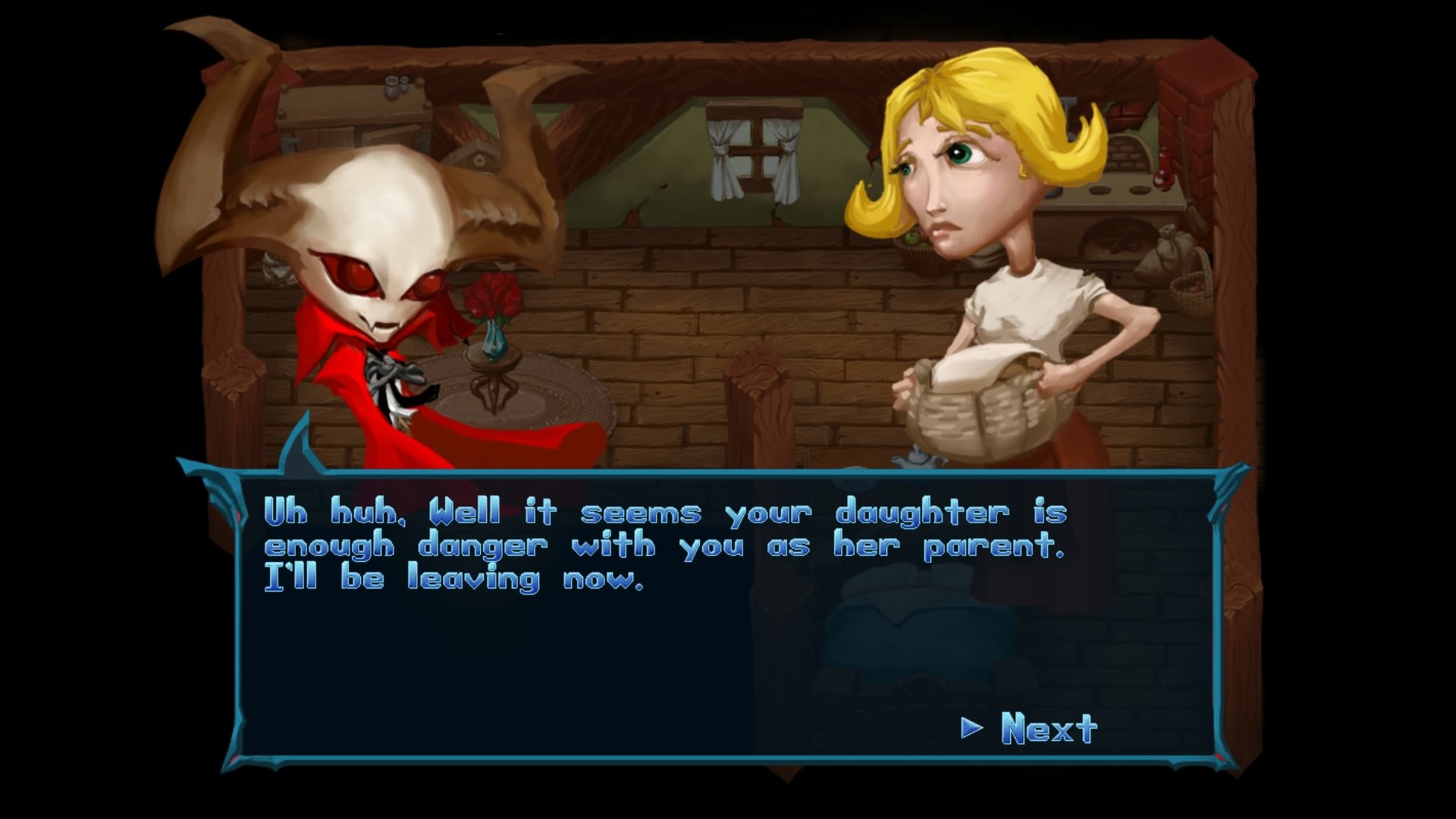 Rack N Ruin’s confident upending of fantasy cliches is bolstered by a gorgeously realized world. The hand-painted, cartoony look is smooth in motion and crammed with detail. Enemy designs could have a bit more variety, though. This game is an offender of abusing palette swaps, for sure. Environments run the gamut from enchanted forests and deserts to crystal prisons and ancient temples. All of the usual suspects are here, with alternate demonic versions that serve as progress indicators and respawn/fast travel points.

Combat is a frenetic,  chaotic affair. Hunter’s love for bullet hell is readily apparent. Even early fights have Rack outnumber three-to-one, and enemies barrage him with waves of blue and yellow bullets. Players must be quick and use each of Rack’s four core abilities in conjunction with the large number of consumable items. The sword has a wide sweep attack perfect for dealing with mobs of melee enemies. Lightning jumps from target to target at range. Consumables also interact differently with these core abilities: bombs can be turned into projectiles with a swipe of the sword, for example, while the boomerang takes on properties of the equipped element.

Rack N Ruin’s difficult spikes early and often. The second boss continually steamrolled me after a very easy introductory hour, and halted my progression for a while. The combat reaches a certain point where Rack simply isn’t nimble enough to keep up with the onscreen insanity. His animations have a lot of inertia, and he doesn’t control as precisely as he should. A dodge maneuver is conspicuously absent, and strafing is very slow when firing. There is only one item that increases movement speed, and it’s pretty much a necessity for some of the harder fights. The lock-on system won’t do you any favors, either. I lost count of how many times I died when I accidentally locked onto an interactive item in the environment and not the giant steampunk mecha trying to curb stomp me. The checkpoint system is also unnecessarily punishing and inconsistent. Sometimes, I’d die and be sent back to the entrance of the dungeon, but my progress wouldn’t be reset. Other times, I’d die and have to re-do the environmental puzzles. There were other instances where I’d respawn right outside the boss room after a failed attempt. Baffingly, there’s also no way to pull up your inventory while inside a dungeon. There’s no way to re-arrange your item bar without stepping back into the overworld.

These are all minor gripes that add up to a decent amount of frustration when they converge. This lends Rack N Ruin an artificial difficulty that just feels unfair at points. Bloodborne is punishing, but (almost) never feels unjust. Legitimately earned progress is usually never taken away– this isn’t quite the case with Rack N Ruin.

Rack N Ruin tries to be too much and never quite achieves the lofty genre-bending goals it sets out to achieve. Combat is marred by uneven checkpoints and unbalanced enemies. Dungeons are filled with secrets and fun puzzles, but they never reach the flawless level design that Nintendo is known for. There’s a lot of charisma in Rack N Ruin. There are just not enough original, well-executed ideas outside of the witty dialogue and irreverent tone.