This might be the year Injustice: Gods Among Us takes the Justice League to the Big Leagues.

Geez, fighting game players are spoiled in 2013. Currently, the fighting game community has become saturated with a slew of good choices at our fingertips. In fact, it is damn near a renaissance of joystick jousters, where it’s harder to find time to juggle all of the quality fighters instead of just juggling combos. And with EVO 2013 right around the corner, is it nigh time to throw a new bone to the well-fed dogs? Yes, Injustice: Gods Among Us is a tournament-worthy title for XBOX 360, PS3, and Wii U that fits right in and stays on par with the rest of the like, i.e. Ultimate Marvel vs Capcom 3, Tekken Tag Tournament 2, and Mortal Kombat.

Speaking of Mortal Kombat, NetherRealm Studios rebuilt the Mortal Kombat franchise from the ground up two years ago and then carved us a gem in this DC Comics inspired brawler. If this gem isn’t the Hope Diamond of fighting games, it’s definitely one to get engaged to, because Injustice: Gods Among Us rings of quality. On that note, the luscious visuals you’ll see are as pretty as a chiseled diamond on the flatscreen. It’s as if the creators of Mortal Kombat imported all of the good stuff from their fatal franchise, adding a kick-ass Super Friends spin to the repertoire.

Seriously, Injustice: Gods Among Us menu options are practically a carbon copy of what’s featured on the Mortal Kombat disc. First off, there’s the spectacular Story mode, S.T.A.R. Labs (a tower of challenges with a story), a load of Battle modes, improved Training mode, working Online mode, and Archives to spend hard-earned XP on swag, like extra costumes and more Battle modes. The only feature ignored from the newest MK is the 2-on-2 battles. Just saying, Injustice: Gods Among Us is superior to Mortal Kombat 9 in almost every way. If you are on the fence whether to purchase Injustice: Gods Among Us, then we need to find a way to tip you over to this side of the yard. 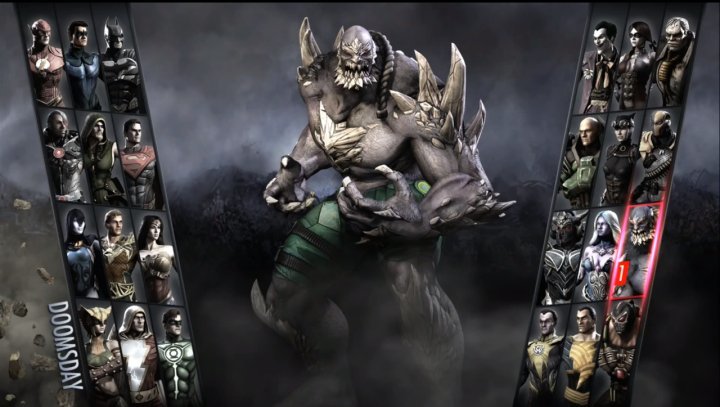 The 24 character roster is hella sweet, even though it might be a little Batman and Superman heavy. It doesn’t seem like anyone is overpowered, so the cast feels pretty balanced at this point. Every character feels independent of each other, especially with the inclusion of special powers that adds depth and strategy. For example, Superman’s power will make his attacks more powerful when activated, while the Flash’s power temporarily speeds him up (actually, the game slows down the opponent, replicating a faster Flash), allowing once impossible combos and giving a definite speed advantage for mix-ups. 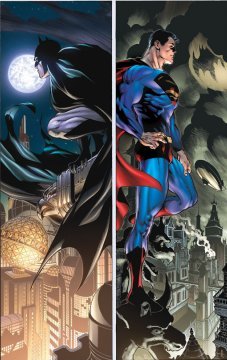 The Story mode is SOOOOO good and is worth every penny (or is that Pennyworth?). Essentially, the story takes place in an alternate universe where the Joker tricks Superman into killing Lois Lane and his son. After Batman catches the Joker, Superman transforms from Clark Kent to Dark Kent, confronting the purple-clad Joker with fists full of rage and proceeds to kill the clown; at this point, Superman goes crazy on Metropolis, and nothing’s the same again. This, of course, triggers a string of events, and somehow, the heroes of our universe have to find a way to stop Superman’s rampage. Yes, Superman is your villain. The plot is crazy entertaining and is complimented by enjoyable voice acting and a decent soundtrack.

This whole episode plays into a seamlessly interactive movie with fights and some real-time events. Without any hesitation, it’s clearly every bit as great as the Mortal Kombat story. The classic Battle mode doles out an ending for each of the characters, too. As an added bonus, when you play through the S.T.A.R. Labs mode, which hands out combative challenges like “win by using only throws”, there are extra stories that are scripted out for every character. I have only read a handful of DC Comic books; I’ve mainly watched the Batman and Superman movies/cartoons and played some related games. However, that didn’t stop me from enjoying and appreciating everything Injustice has to offer, nor did I feel left out playing all of the modes and characters. The plot’s easy to follow and is more than happy to show newbies, like me, the ins and outs of the DC universe.

Of course, all of this attention to detail and plot would be for naught if not for the fluid fighting system. You know NetherRealm Studios isn’t playing around, especially after the last time they flopped hard on the god-awful DC vs MK (different studio, but same lead in Ed Boon). Granted, Injustice: Gods Among Us borrows the Mortal Kombat engine, juggling system, and special move list, but the game stands on its own two feet and distinguishes itself along side its “kombative” counterpart. Injustice is fast-paced and favors fight stick technicians over lazy button mashers. But if Solomon Grundy or Catwoman falls in the fidgety fingers of a crazed rookie, they can easily serve up some humble pie.

What separates Injustice from other fighting games of its ilk will be found in:

The life bars are set-up in the same vein as Darkstalkers 3 and Killer Instinct, where you play with two life bars per person that carry over to the following round once someone loses the allotted vitality per bar. You will see some scaling inside combos, but it’s never too severe to detract from going for the sexy, complex stuff. The combos seem to fall pretty consistently when you’re juggling jokers.

Enhanced special moves and alpha counters are exchanged for bars within the bottom attack meter; you can also save the full meter to perform a super special attack, like Superman knocking Doomsday high into space then pounding him back into the pavement. Every character’s super special attack is unique. They’re pretty much X-Rays from MK with how you slap all the buttons like X-factor and combo pretty easily. The Clash is entirely new. It is a mid-battle meta-game which pits how much meter you want to wager for life gain, but if you don’t ante up enough meter, then you will lose vitality AND your wagered meter bars. Clash can be activated only once per person after they’ve lost the first life bar, and after much thought, it is a very welcome addition to survival and screwing over the competition.

Let’s talk about the interactive background real quick. When we all saw this element included in its formal debut last summer, some may have sarcastically thought aloud, “Great, we get to play an apocalyptic Smash Bros.” Thank God, it’s not like that at all. It only enhances the combat because the landscape doesn’t dominate the landscape of battle unless you let it. You can kind of compare it to Street Fighter X Tekken’s gems, and if you don’t like it, then tough snot, because you cannot deactivate it; however, it gives an extra lens on what it would be like to be a resourceful super hero or villain amidst a heavyweight fight to the finish. All of the stages are different and present combo-able scenarios that truly give way to some very epic outcomes. The best is when somebody gets smashed into the Scarecrow’s cell at the Arkham Asylum; he injects the poor soul with one of his psychological concoctions and then beats them mercilessly. Awesome. 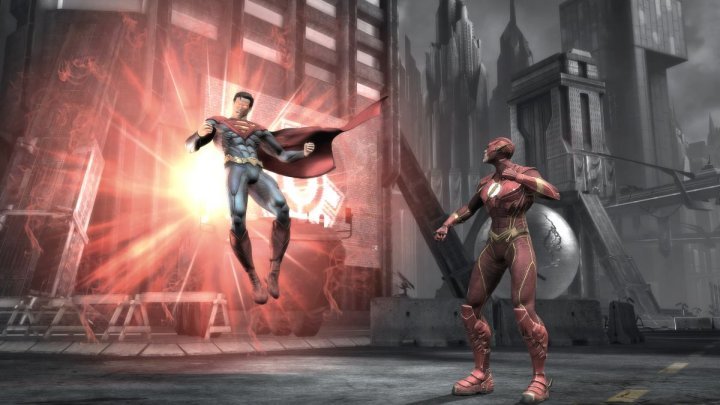 Does all this sound like a little much to digest? Well, there’s a pretty in-depth Tutorial included that I found very helpful in smoothing out the learning curve. The Training mode is what you should expect it to be, so you can practice what you want and program desired scenarios. The in-game manual is one of the best I’ve ever seen in a fighting game, mainly because it volunteers frame data information you would have to visit EventHubs.com for usually.

After you get the hang of walloping up the training dummy, you can always master S.T.A.R. Labs and play through all of the Battle modes. Oh yeah, you can take the multiplayer melee to match making online. The best part is the lack of any major connectivity issues (an upgrade from MK). If you’re feeling extra courageous, you can always wager sought after XP to spice up your one-on-ones, king of the hill, and survivor fighting matches. Expect Injustice to receive the routine DLC treatment, and you might as well consider the season pass for $15 to inherit Flashpoint costumes, 4 new characters (one being Lobo), and whatever Warner Bros wants to update online play with. Let’s just hope zero Mortal Kombat characters make the leap to this alternate realm.

The only aspect that Injustice: Gods Among Us suffers slightly from is its sloppy, six-button layout. It isn’t necessarily bad, it’s just awkward, much like Ultimate Marvel Vs Capcom 3 was when it first hit the streets because they are coincidentally similar. Injustice incorporates a light, medium, and heavy attack for direct combat, and the other three indirect combat buttons are for the special ability activation, meter burn to enhance special moves, and the last to interact with the background. It’s wonky at first, but it grows on you, much like Ultimate Marvel Vs Capcom 3, though I’m willing to bet there will be a lot of button changes if a bunch of people played in the same living room. Any other complaints about this title, like the inability to skip out of the winning character’s video, just sound petty compared to what this game offers. 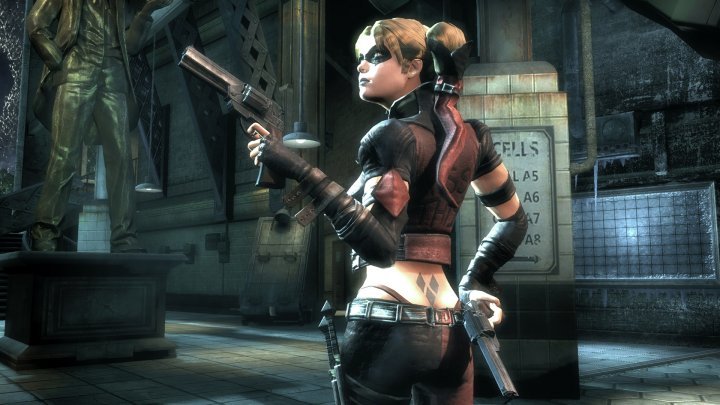 Injustice: Gods Among Us’ success will come down to preference, much like King of Fighters XIII, because you get everything you could want from a truly solid fighting game. Injustice features a cast of recognizable and compelling crusaders that have been mostly under-utilized in the video game medium. Some people, like myself, grew up with more Marvel Comic roots than a DC Comic upbringing; it’s great to get to know the other side of the family better. Injustice is extremely fun with a solid fighting system in place that’s easy to pick up, yet challenging to master. The disc boasts a beautiful single-player mode, really good Training mode, a more than competent online service, and enough incentives to keep Injustice in rotation to earn all of the cool items and to read the character bios. If you didn’t know the formula for a damn fine fighting title in the year 2013, well folks, NetherRealm Studios nailed it.

Injustice: Gods Among Us favors the resourceful and technically driven fighting game fans; hopefully, it will hold rank among the current crop of excellent competitive titles. It’s hard to say exactly how Injustice is better than the rest of the pack, but it is easy to see it clearly outshines the lot of them.

This review is based on a retail version of the XBOX 360 version published by WB Games, developed by NetherRealm Studios

Did you like this? Share it:
Did NetherRealm Do DC Comics Justice? | Injustice: Gods Among Us Review
Overall Score9
Positives
Negatives
9Overall Score
Reader Rating: (0 Votes)
0.0