Life is Strange indeed. This charming little game developed by Dontnod Entertainment takes after Telltale Games by going the episodic route. The game isn’t really a point-and-click adventure; it’s more an interactive drama. There aren’t many puzzles that need solving, and the puzzles that do exist are easily figured out. Life is Strange is narrative driven, and luckily, that’s all it really needs to stay with you as a memorable title.

Before I even get into the story, I need to describe how much I absolutely love the presentation of Life is Strange. I’m not talking about graphics alone, which look like some painter used deep brush strokes in the details. I certainly love the graphics, but the overall style fits the setting so well I can’t praise it enough. Every time you aim at an item, the game outlines it like pencil sketch from an art book. While many games are trying to be as subtle as possible with button interaction, Life is Strange does the opposite.

The character claims to see the world through a camera lens, and everyone is very artsy, so the game looks artsy. It doesn’t break the immersion, it only deepens it. It does this creatively as well. For instance, looking at a character’s selfie they took with their phone will actually look like someone painted the character instead of a camera picture. It’s a cool little twist that doesn’t do anything for the story, but gives Life is Strange that extra unique touch. It’s those kind of touches that can really set a game apart from all the others. 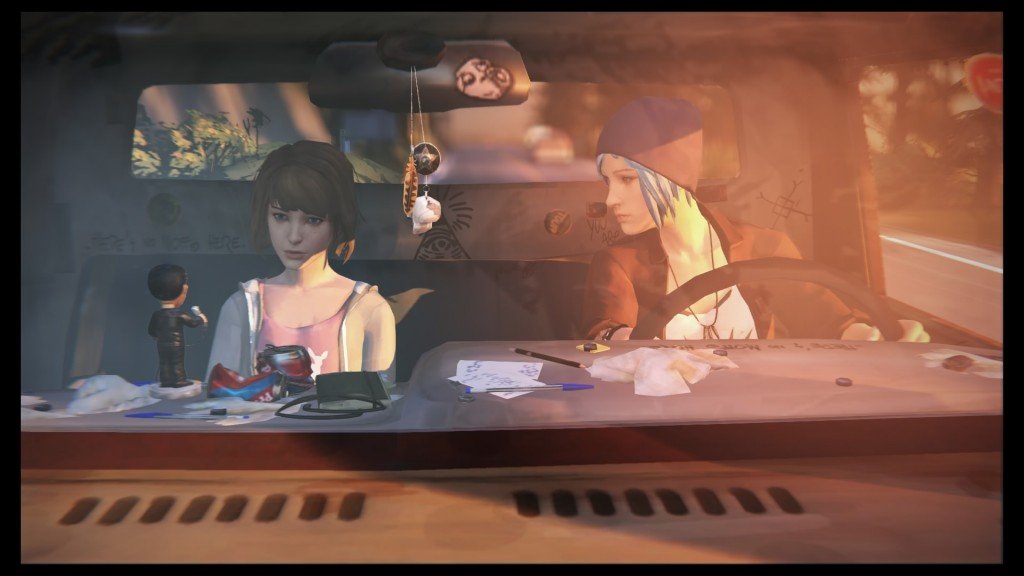 You play as Max Caulfield. An eighteen-year-old photography student that was able gain entrance into the prestigious art school Blackwell. A school that is located where she use to live five years ago before moving to Seattle. She is not the normal protagonist we are all use to.  She isn’t a super hero, beautiful model, confident leader, or even the cool kid. She’s shy, lacking confidence, unsure of almost everything, doesn’t fit in, and definitely lost in life. She’s an introvert at its core definition, and that makes me love Max immediately.

I am not pretending to be a teenage girl, but watching her deal with the high school stereotypes brought back many old memories of my own warzone in high school. What I like best is how Max is intelligent, witty, nice, and is very gifted with a camera—she just doesn’t think so. The teacher says she has a gift, but Max is too afraid to turn in assignments because she thinks she isn’t good enough.

She’s quiet and socially uncomfortable in most situations, but when she feels at ease, she laughs and jokes around. That brings out a very real feel for this protagonist. Lacking confidence when there is no reason to lack it, and being so worried about her own image she can’t always be herself. Everyone has been in situations like that before. 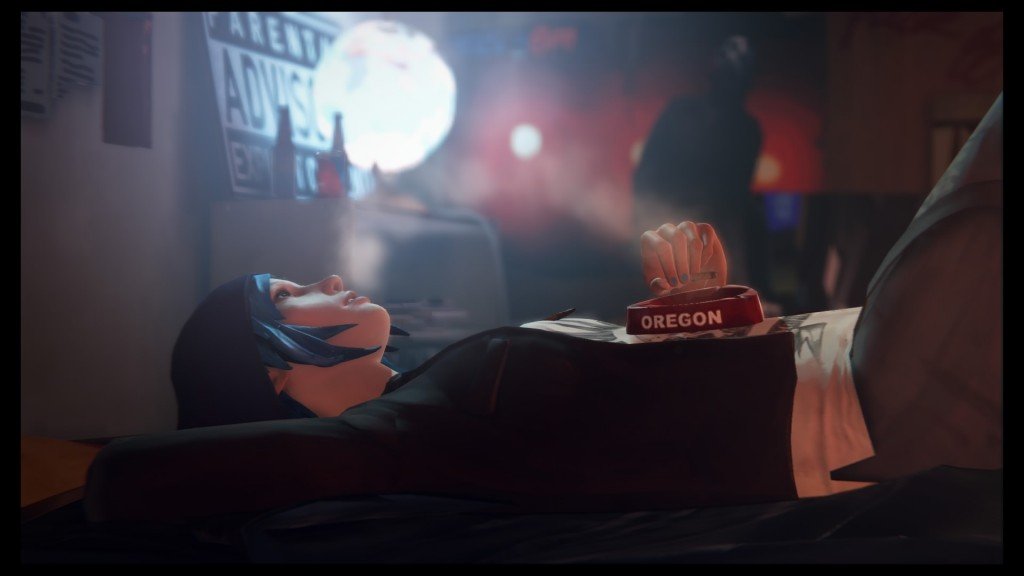 Life is Strange is a drama with a very authentic feel, and that is one of the main reasons why I like it so much. It feels like I’ve had some of the same conversations that Max has had. The teachers remind me of some of my old teachers, and I could feel Max’s anxiety about being at a new place without really knowing anyone. That’s what Dontnod was striving for and they hit the nail on the head. They created a setting that feels so realistic it will undoubtedly strike a chord with everyone inside.

It isn’t all high school drama. Early in the game, Max makes a trip to the restroom to collect herself. Suddenly a boy stumbles in and talks to himself in a very unstable manner. A girl comes in, they get in an argument, the guy pulls a gun, and the girl is killed. Not your everyday high school drama after all. Time slows down after the gunshot, and suddenly Max finds herself back in a classroom she was in only a few minutes before. She immediately comes to the conclusion that she can rewind time, keeps her nerve, tests out her theory, learns it is true, and decides she wants to save the girl. Definitely not regular drama anymore.

Life is Strange carries on from there and I won’t spoil anything. You walk around and speak with everyone to get a good sense of what the story is. The town you’re in seems very peaceful, but there is also this darker underlying element that I can’t quite figure out yet. A girl named Rachel went missing months ago without a word to anyone. Most characters apparently adored her, but none of them know what happened. It’s a very sketchy feeling you start to get. That maybe the quiet little town you’re in isn’t actually so quiet. 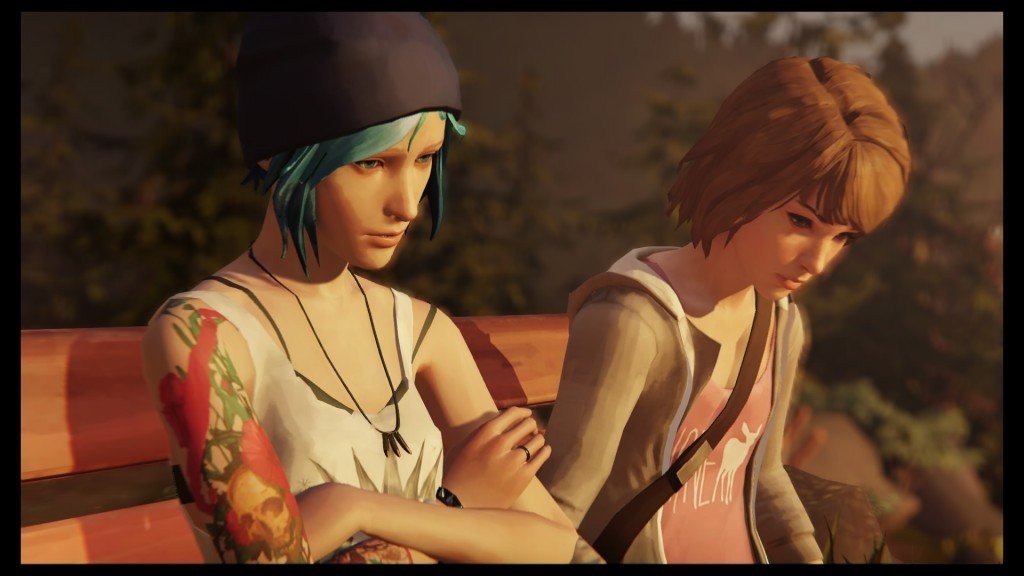 That’s for future episodes to determine, for right now, I can only say the setting feels very real when you speak with each person and hear their troubles. The banter between the two female leads is authentic and genuine. The voice acting is superb and it really makes the dialog come to life in a very natural way. You can feel the hurt between the two friends, the awkwardness, the uneasiness, and most of all, the deep connection they have.  You will even laugh at some of their witty comments. Minus the time traveling thing, Life is Strange presents a very slice-of-life atmosphere, and that realism is its strongest feature.

Let’s not forget about that little time-traveling aspect. It is the main gameplay element that sets it apart from other games in this genre. Life is Strange is very similar to Telltale games with the primary gameplay feature all about speaking with other character and choosing the proper response. Yes, there is even a warning that flashes in the top left that says your actions will have consequences. It is as unnerving as you would expect it to be.

Unlike a Telltale game; however, when you pick the wrong option in Life is Strange, you are able to rewind time, and pick a different option. You can use this for small everyday things, like learning a skateboarder’s trick so you can then say the same one to impress him. And you can also use it for far more serious actions, like not getting caught when you’re snooping around someone’s house. For instance, if you knock over a bunch of files, you can read what you need, rewind time so they are all back in place, and you still retain the knowledge you needed.

It’s a very interesting premise that took me a little bit to get my head around to solve the puzzles. Once I understood the way to work the system, everything was easy after that. There was never any difficult puzzle of any sort, but there were definitely some very difficult decisions you had to make. Some decisions are answered in this very episode, and naturally, some decisions may not matter until much later in the game. 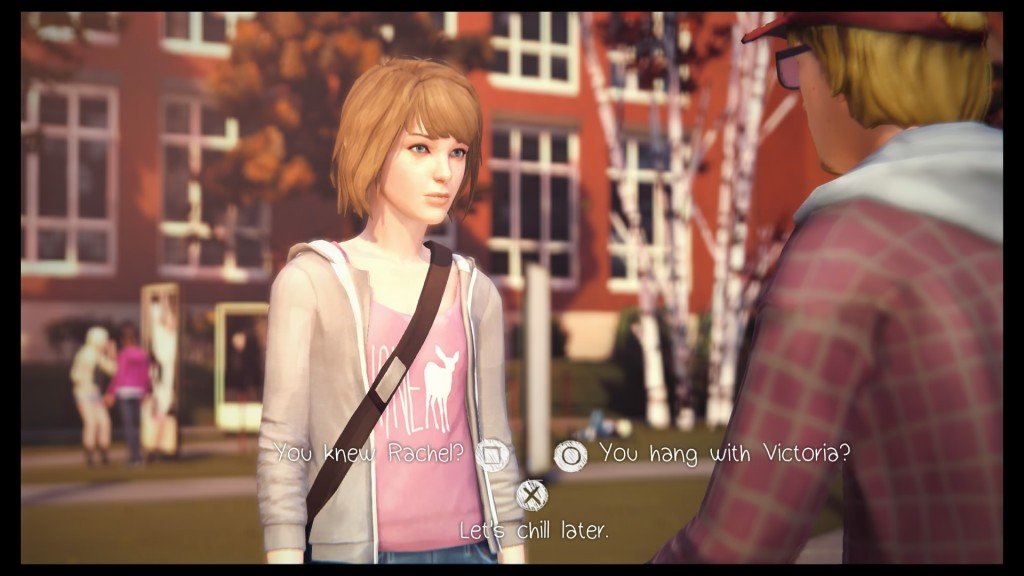 One thing I don’t like about Life is Strange is how stereotypical the characters can be. It’s hard to say if it is a parody on life, or Dontnod really just wanted to present the high school atmosphere as much as possible. I don’t need to see jocks pushing a kid against a locker or a cheerleader flirting with the football quarterback to understand this game has high school drama. The rebellious teenager has dyed hair and a mean military step-father. It’s all a little too much. Then again, this is the first episode, and these characters could have many depths I haven’t discovered yet. But as it stands right now, you can classify all of them right into the stereotype they are presented as.

Sadly, that’s not the only problem with Life is Strange. In the same way the characters are too stereotypical, the writing can try a little too hard sometimes. In some instances it feels very natural and flowing, mainly thanks to the great voice work. Other times, it tries way too hard to have that hip/weird/indie feel to it and ends up sounding way to silly. When a game does so well to feel authentic, it can be jarring when a character says something so random it feels forced into the scene.

The other issue comes with the ability to rewind. It takes a lot of the tension away from the conversations. You don’t have to worry about what you’re saying because if it is the wrong thing, simply crank time back and try again. There are time when you have to advance the story and won’t be able to take back a decision, and those moments are filled with lots of tension. Overall, speaking with characters lacks the intensity it can have with the ability to rewind. 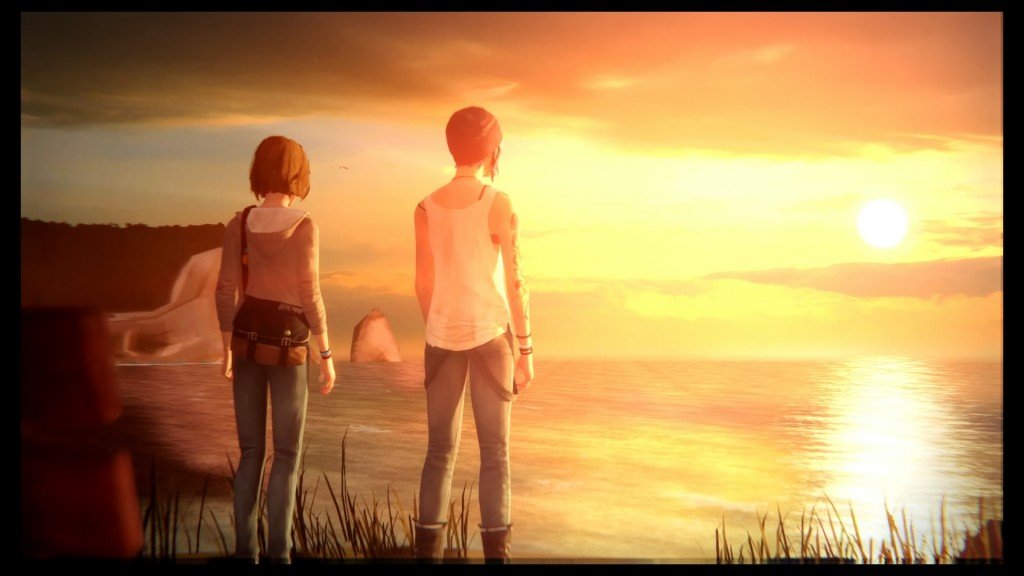 Life is Strange caught my eye when I saw the first trailer, and I’ve been waiting eagerly to play it since. I wasn’t let down in the slightest and I am only left with a burning desire to play the next episode when it comes out. Minus the few instances where the writing was trying a little too hard, the character interaction felt very natural. The authenticity really hits home as I felt myself relating to Max in many situations, and I didn’t have to be a teenage girl to do so. The story has this uncertain mystery about it that it has me hooked, and I genuinely have an interest in all the characters I met, even if they are all stereotypes. The presentation style is so original and charming, I took my time examining every possible part of the game I could. Saying all that, this game isn’t for everyone. It is slow, and I can easily see the small drama being put-off as not important because it isn’t the end of the world. But hey, to a teenager, everything is the end of the world.

This review is based off a retail copy of the Playstation 4 version of Life is Strange: Episode 1 – Chrysalis developed by Dontnod Entertainment and distributed by Square Enix.