If you are into point-and-click adventures, or pirate lore in general, then Paradox Interactive has you covered with their latest release, Pirates of Black Cove. In this title you play as a sailor on a British vessel that just mutinied against its previous captain, and it is now up to you to lead your crew to riches and glory while avoiding the British, who want their ship 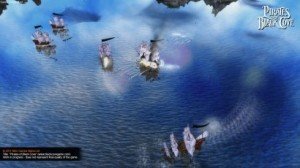 and crew back. You can accomplish this goal by going on quests, battling rival vessels and establishing a pirate stronghold. All in a day’s work for a pirate captain.

There are two main sections to the game, sailing and land exploring. The sailing has a similar feel to Sid Meier’s Pirates, but for those unfamiliar with that title, the game controls like this: You are in command of a ship viewed in the middle of the screen, and you can travel wherever you like by using the arrow keys.  If you want to know where you are, you can pull up the map by pausing the game. The weapons can be fired whenever you need them by using the space bar. The controls work well, but unfortunately there are some problems. There is no interface map pointer or GPS function, and this really hurts the flow of the game since you have to pause to access the map. Then you have to figure out which way you are heading, which isn’t always easy. Thankfully, this has been addressed in patches released just after launch, although the problems have not been totally fixed. Unfortunately, problems are not limited to knowing your bearings. While you are sailing, you will encounter a number of items and collectibles which have little weight in terms of the story or much importance at all. The only important collectibles you’ll come across are the blueprints which give you access to new weapons and ships. It feels like a waste of time including all 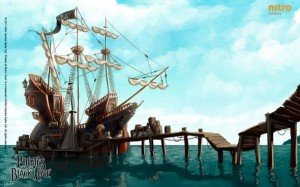 these collectibles with no purpose other than simply collecting them.

One of the larger issues with this game is how it is balanced. In the game, it doesn’t matter what kind of ship you have. All ships look different but you can find success no matter what size your ship is. The battle system is extremely easy and larger ships go down rather quickly by using rudimentary techniques. Another big issue is the lack of a lock-on mechanic, as accuracy is spotty at best and players will find themselves shooting wildly just to get their bearings. This battle system really takes away from the gameplay and frankly lessens what could have been the best part of the game. It is also difficult to tell which ships belong to which faction. Ships in the game are identified by a thin banner on top of their mast, and it is difficult to see who the ship belongs to unless you get right next to it. At that point, you may or may not have wasted a fair amount of time getting to the ship just to identify it, and even worse, you could get right up next to the ship only to have it attack you. This leads to a lot of unnecessary battles and wasted time.

Unfortunately, the other aspect of the game, land exploring, isn’t much better. There is a lot of time wasted walking around the map as enemies are few and far between, and even when you do encounter them, they are dispatched rather quickly. You won’t find anyone particularly challenging, especially when you count ranged fighters amongst your crew. It is apparent that most of the issues in this game revolve around combat deficiencies.

Combat aside, travelling to different areas of the map takes a long time, and even though there are items that will bring 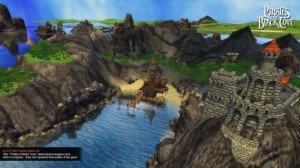 you back to port, once you are inside the port you have to spend a lot of time walking to your destination. Even quests themselves involve large amounts of travel time. You will have to sail to wherever the game wants you to go, dock, move your crew to the quest, accomplish your goal and then walk all the way back to your boat just to use the item to get back to the port you want to get to. It’s not uncommon to spend 10 minutes in walking alone, and during that time there is little to no action. This mechanic alone almost makes the game unplayable. A fast-travel option would have greatly improved the experience.

Though this game has much character underneath the surface, it has a difficult time showing its potential. The whimsical pirate motif is seen throughout the game and is done in a way that pulls you in, and the characters themselves have a nice flair to them. The game itself looks great, with textures that are nicely rendered, and you feel like you are sailing on an old pirate map, which just adds to the charm. Unfortunately, the game mechanics get in the way of the atmosphere that the game is trying to create with its sense of style. These mechanics are broken and until the game is patched, we cannot recommend it.

This review is based on a review copy of the Steam version of Pirates of the Black Cove by Paradox Interactive.