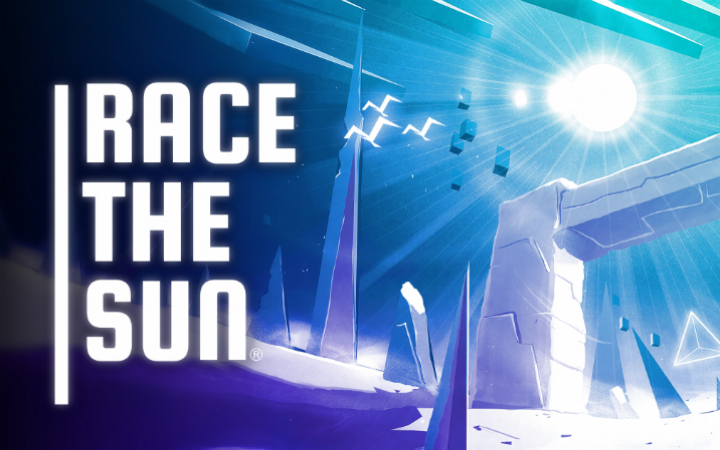 The indie scene is as strong as ever, but sometimes games get tied up in trying to reinvent the wheel. Over-complicated control schemes, lack of a cohesive story and even poor game design are all issues that still plague games today. It is only when simpler games, like Race the Sun, come out that prove that bigger, isn’t necessarily, always better. It seems to be a foreign concept but when a developer focuses on what makes a game fun, the gamers ultimately benefit.

Race the Sun is a minimalist runner where the player controls a ship that is constantly moving towards the horizon, quite literally chasing the sun. The sun is your source of power so making sure you stay in the sunlight is a crucial gameplay element. Of course, it isn’t as easy as it sounds, as obstacles are constantly spawning in your path getting in your way. To help get past these obstacles, several different varieties of power-ups can be found which produce various effects. These effects range from giving you more time to finish the level to performing a mega jump clearing sections of the course in a single bound. 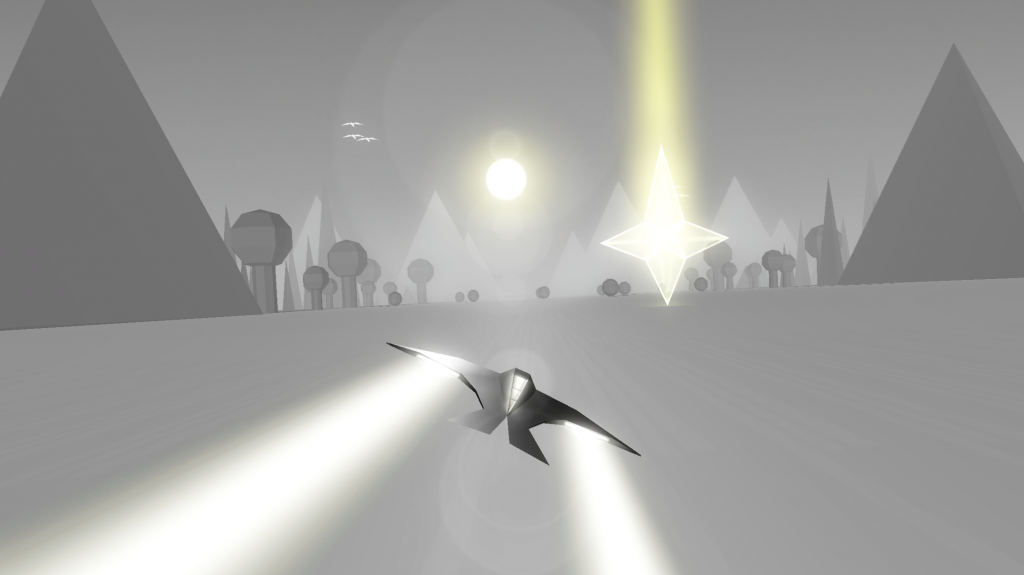 While the design of the game may sound simplistic, there are a number of behind-the-scene mechanics that make this game greater than just another endless-runner. The controls for this game are tight and precise. Whenever you crash, and believe me you will, it always feels like you did something wrong rather than the game cheating you out of a life. Since controls are often one of the most important element to any game, it was good to see that this was one of the best parts of the game.

Another strength the game highlighted was its learning curve. Stages start out very easy with relatively few obstacles and slower speed. As you complete runs, the difficult ramps up nicely with bigger obstacles and moving objects. Before long, you’ll be hurling down a course, avoiding shadows, dodging falling barricades all at a break-neck pace. By the latter stages, the game almost feels frantic, but you always feel prepared for whatever the developers throw at you. In addition to the pace, you’ll unlock new abilities as you get further in the game which always seem to help you right when you hit a wall, both figuratively and literally. The general design just seems to work harmoniously and the gamer ultimately benefits with a punishing, yet forgiving game that strikes a perfect balance. 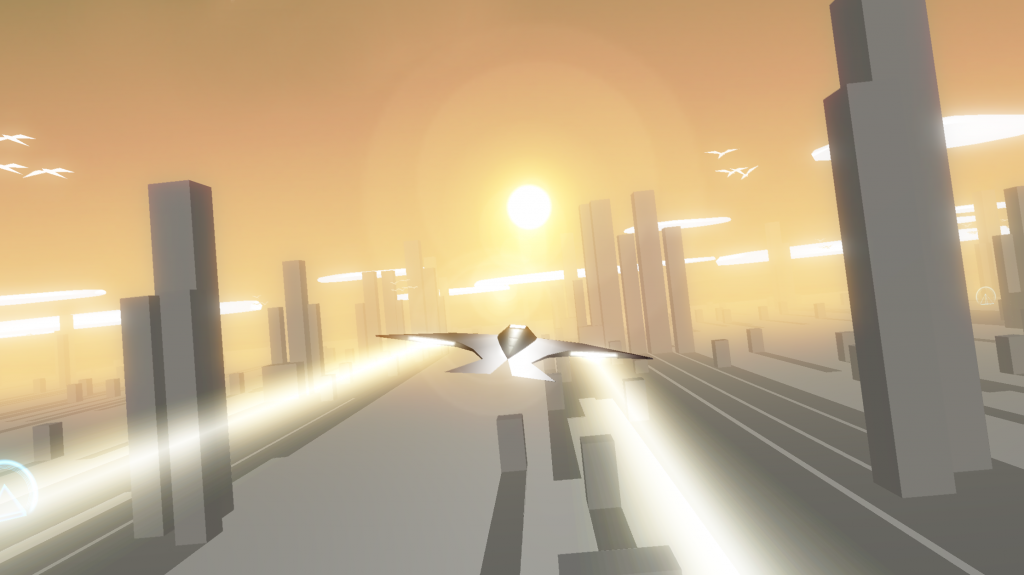 Finally, the game posses a minimalist aesthetic which is interesting and strangely compelling. All the environments are in grey scale but the sun itself is still in full color. The contrast of color seems to make you want to stay in light, despite the fact that you have to stay in the light to survive. You feel happy when the sun shines on you and when you embark into the shadows, you feel anxious until you get back in the light. The power-ups and select obstacles also use color to stand out against the backdrop. They aren’t very bright but they catch your eye so even in the most frantic sections, you’ll know where to go for help or where the danger is coming from. It is a brilliant use of color which works because of the simplicity of the rest of the game. It was a risk to do this, but it works well. The game also features a minimal sound track with some dull tones to denote actions performed in the game. Ultimately, I would have liked to hear the score stand out a little more than the demure drum-and-base inspired soundtrack which comes with the game, but that is more a personal preference than a requirement.

One with the game is the gameplay becomes repetitive rather quickly. The goal is always to get to the end intact but doing so a hundred times or more gets old. Granted, the developer mixes in new courses all the time, with new obstacles and new objectives to achieve. There is also a level editor so if you think you could do a better job at level design, you’ll have every opportunity to do so. Finally, there is a leader board to conquer so if all that wasn’t enough to pique your interest, there is a competitive element to the game at your disposal. However, whether these distractions are enough to overcome the repetition comes down to a person decision. 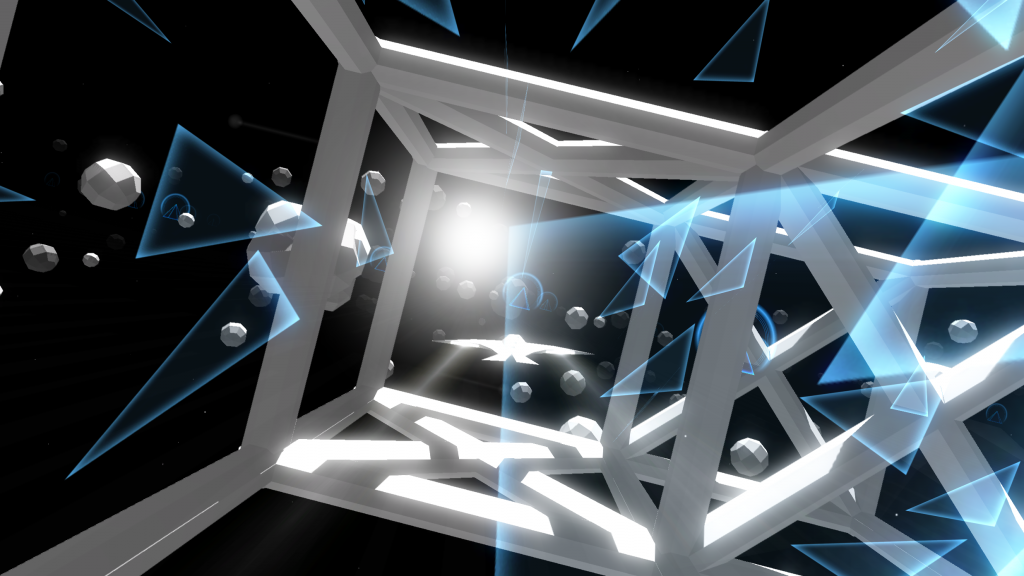 All in all, Race the Sun in a fun, and sometimes frantic, runner that packs a big punch in an indie package. The levels are well designed, the game play ramps up nicely and it will challenge you to the end. The game may appear simplistic and minimal, but that is a deliberate choice that works in its favor. You’ll definitely come to appreciate these elements when you progress in the game. The game also develops rapidly with new levels coming out all the time. As long as you can get past playing a game over and over, you’ll find plenty of value in Race the Sun.

Did you like this? Share it:
Ride on to Sunset | Race the Sun Review
Positives
Negatives
8Overall Score
Reader Rating: (0 Votes)
0.0