Hill Climb Racing by Fingersoft is an unbelievably addictive game available for download on Android and iOS devices.  Fingersoft has released a simple racing game that will hook both hardcore gamers and the rapidly increasing casual gamer market, and for a complete list of Fingersoft applications be sure to visit them at http://tiny.cc/yf9gpw .

The game starts with one unlocked Jeep and one unlocked level, and the goal is to collect as many coins as possible.  These coins will be stored in a bank where they can be used for improvements to the car, additional level unlocks, and additional car unlocks.  Coins can also be added to the bank by having your automobile of preference complete flips or back flips.  Each flip fills up the bank with a thousand coins.  Lastly, coins can be earned from hang-time after a jump.  The impatient player will have the ability to purchase in-game upgrades to bypass having to earn a better car or level.  Fingersoft has banked its earning potential on getting the less patient or more addicted gamer to spend. 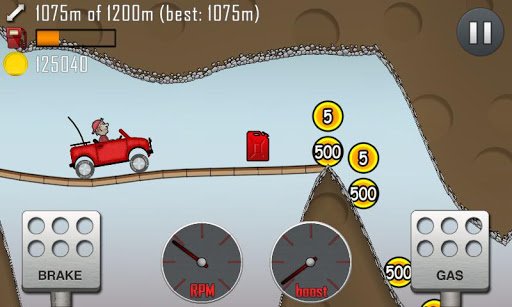 In addition to the “Free to Play” method, HCR grabs the customer with its seemingly infinite gameplay.  Players have the options to unlock up to four cars and can further enhance gameplay by using coins to modify their cars.  Players will then have the option of using one of the four vehicles on any of eight unique levels.  Even after the player has completed all the modifications on each level, the game continues.  Each of the eight levels has no end, so players can play as long as they want.

Lastly, Fingersoft is well aware that a little bit of violence draws in a large gaming audience – even the friendliest of games make sure to incorporate violent elements.  Look no further than the smash hit Angry Birds.  Like Angry Birds, Fingersoft uses just one small, tiny trace of violence in HCR: players will continue to race until an unfortunate auto accident leaves the driver lifeless with a broken neck.  Fortunately for the squeamish, there is nothing to be worried about: the violence is done through a comical driver, so most gamers will smile or laugh.

HCR lacks in only one area.  The game’s repetitive soundtrack can cause players to simply put the game on silent while playing.  With highly creative and intuitive gameplay, everyone would benefit from a more robust soundtrack.

Hill Climb Racing is not just one of the most addictive racing games available, but also one of the most addictive mobile games currently available to download.  The lack of a full soundtrack can easily be overlooked by the incredibly exciting gaming experience. You can download the game from iTunes at http://tiny.cc/na9gpw or from the Google play store at http://tiny.cc/de9gpw.